Over 75 local and national American craft breweries will be on tap with a special “Kentucky Heritage” section featuring beers brewed in the bluegrass state. “Mug” it up at Magnolia Photo Booth and “tap” into some tunes provided by LIVE entertainment by 100% POLY, plus dance to your own beat with the Drake’s Silent Disco. View vintage airplanes on display and photo opportunities, plus feast on some of Louisville’s best food trucks and MORE!
With over 250 beers available onsite, make sure to sample some of the best craft brews from featured breweries like: Louisville’s own Against the Grain, HiWire Brewing-with a NEW taproom in Louisville, Bardstown’s ONLY brewery Scout & Scholar, neighbors to the north-Rhinegeist and Upland Brewing. Others from around the country like Bell’s Brewing from Kalamazoo, Michigan, New Belgium Brewing Company (Fort Collins, Colorado) and some southern craft breweries like Terrapin Beer Company residing in Georgia. Tailspin Ale Fest always highlights brews brewed right here in the Bluegrass State with the “Kentucky Heritage” section featuring breweries like, Country Boy Brewing from Lexington.

Tailspin Highlights:
• ESPN Radio Sports Bar
• Back by Popular demand Cox’s Cigar Bar
• Tailspin Ale Fest offers a Stay and Play Package with tickets and hotel rooms bundled for a complete weekend plan at the Hilton Garden Inn – St. Matthews. Includes a round trip ride to the festival with dedicated entrance, overnight stay and two tickets (GA or VIP available), plus breakfast the next morning. Great for out-of-town guests and even staycationers to purchase lodging and event tickets in one place for a discounted rate.
• Bourbon Barrel Beer Bar
• Cider and Sour Bar
• Over 75 breweries present and over 250 beers available
• Local Food Trucks
• Support HOP Foundation when you visit Cox’s or Evergreen Liquors by shopping for craft beer and pick up a Tailspin Ale Fest (paper) HOP leaf for $1-100% goes to the HOP Foundation.
• HOP Foundation Raffle at Tailspin Ale Fest with items such as a bottle of Pappy Van Winkle, gift card to Cox’s and Evergreen Liquors, Beers and branded gift items from breweries and more. 100% of the raffle proceeds also go to HOP Foundation.
• Photo opportunities from Magbooth and Chris Joyce Photography. Printed photos onsite too!
• Designated Drivers receive a free coffee compliment of Red Hot Roasters
• Live entertainment with 100% Poly on the Independence Bank Mainstage
• Drake’s Silent Disco
• “Get on the Bus Gus” Service emanating from Indiana and Louisville at the following locations to and from Bowman Field with a DEDICATED Shuttle Entrance, ticket pre-check plus a “Pint & a Bite”:
Evergreen Liquors- Middletown
Cox’s JTown Location – Ruckriegel Store
Drake’s – Paddock Shoppe, St. Matthews and JTown locations
HiWire Tap Room – Highlands
Dundee Tavern – Highlands
NachBar -Germantown
Against the Grain Brewery and Smokehouse – Downtown
Upland Brewing – Jeffersonville, Southern IN location
New Albanian Brewing Company – New Albany, Southern IN location

For tickets or more information, visit www.tailspinalefest.com. For the latest updates
about participating breweries and festival news, like www.facebook.com/tailspinalefest or Instagram #tailspinalefest_official

NEED A RIDE TO TAILSPIN? Get on the Bus, Gus! For only $15, check out the locations nearest you and grab a brew and a bite before/after Tailspin Ale Fest. Includes ticket precheck, dedicated entrance with NO WAITING IN LINE, plus a “Pint & a Bite” included with your ticket. Shuttle tickets must be purchased in advance.

Tailspin Ale Fest has raised just over $75,000 in only seven years for Dare to Care Food Bank. With the loss of one of our own local brewers, Scott Hand from Monnik Brewing company has now partnered with the HOP Foundation of Kentucky. The HOP Foundation (501c3) benefits the Kentucky Brewing industry workers in financial need due to medical or other immediate emergency disaster. Support the HOP Foundation by attending Tailspin Ale Fest and shopping at your local Cox’s Spirit Shoppes & Evergreen Liquors.
For the 7th year in a row, Tailspin Ale Fest was honored as one of the
Top 10 US Beer Fests in USA Today ‘s Reader Choice Awards.

“Get on the Bus, Gus!” Shuttle Ticket – $15 + tax/fees:
• Leave the driving to us! Only $15 includes your round-trip bus ride, a pint & a bite with eleven area locations to choose from, including Upland Brewing & New Albanian Indiana options. *Does not include admission to festival. This is a transportation ticket only.
• DEDICATED ENTRANCE gate for Shuttle riders. Get pre-checked into the event and SAVE on those surge rates after the festival. 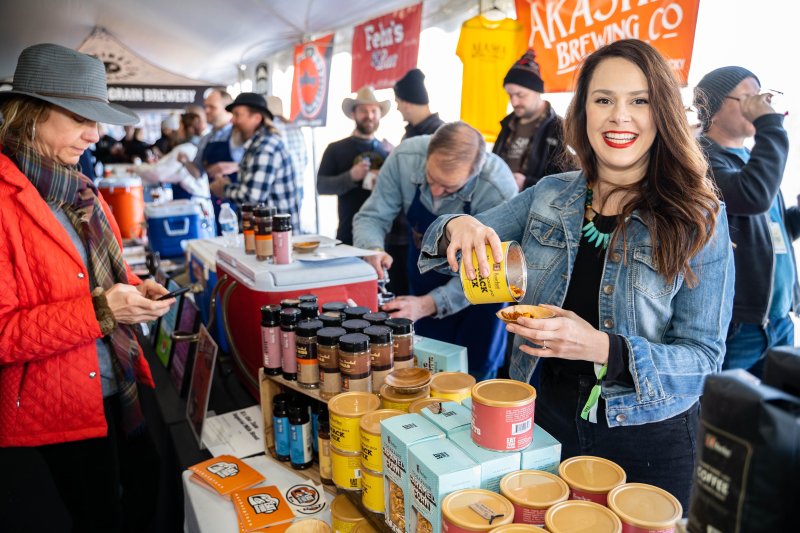