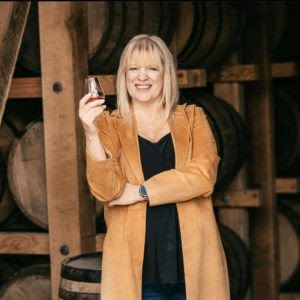 Sherrie Moore is a 35-year veteran of the Tennessee whiskey industry, having spent 31 of those years making her way through the ranks and holding several titles, including Director and Assistant Vice President, at one of the world’s most well-known whiskey giants. Following a brief retirement, Moore made the decision to return to the whiskey world, bringing her immense knowledge and experience of Tennessee whiskey to the Uncle Nearest Premium Whiskey team in January 2017 as Director of Whiskey Operations, where she develops, leads, and oversees the creation of its award-winning whiskeys from start to finish.

Moore worked closely with the great-grandson of Nearest Green, Uncle Nearest’s namesake, at Jack Daniel’s Distillery for more than 25 years where she learned the footprint Nearest left on the whiskey industry. When she heard that co-founders Fawn and Keith Weaver were creating a whiskey brand to honor Green, she couldn’t say no to the opportunity to be a part of the legacy. As Director of Whiskey and Distillery Operations, Moore wears several hats, including supervising the selection and dumping of barrels, as well as the whiskey maturation process. She also oversees the design and building of Uncle Nearest’s new distillery, barrel warehousing and bottling facility that will open in Shelbyville, Tennessee.

Moore is a mother of three adult sons and a true Tennessean through and through, having lived and worked her entire life within a 30-mile radius of Shelbyville, TN, where she currently resides. She is the great-granddaughter of Miss Mary Bobo, founder of Lynchburg’s famous boarding house, and the great-great niece of Lem Motlow, former owner of Jack Daniel’s. Moore holds a Bachelor of Science with an emphasis in Chemistry, Middle Tennessee State University.

Moore will share her experiences at both Jack Daniel’s and her current role at Uncle Nearest Distillery. The presentation will be complemented by a whiskey tasting.

Tickets are $35 and are available online or at the door.