Bluegrass Productions Top Gun car show series is going to be in Hopkinsville , Ky September 24 & 25 2022 with our Top Gun Fall National car show competition. It’s a open show, all years makes and models of cars, trucks, motorcycles, tractors, are all welcome. We have the biggest and best Trophies to be given away in the 5 state region. We have the coolest designer dash plaques to the first 100 entered.
Designer awards to the Top 100 awards high points scored. Ten 6ft Designer orange and gold Trophies to the 10 highest scored entered, Designer award for Grand Champion highest points scored overall. Top 20 designer awards for highest points scored for Top Gun Women behind the wheel, with a 6ft designer Pink Trophy for highest points scored overall. Club participation awards for 1st, 2nd, and 3rd place. longest distance traveled. Lots of food vendors BBQ, FRIED BOLOGNA, PHILLY STEAK, SEAFOOD, LEMONADE, CHEESECAKE ON A STICK and more..we have all kinds of vendors selling various items in their booths, While your in Hopkinsville there is all kinds of tourist attractions, you can pick up a guide at registration. The is one show not to miss, one of the biggest and best shows in western Kentucky. If you have a cool ride and feeling lucky, come on join us in Kentucky. 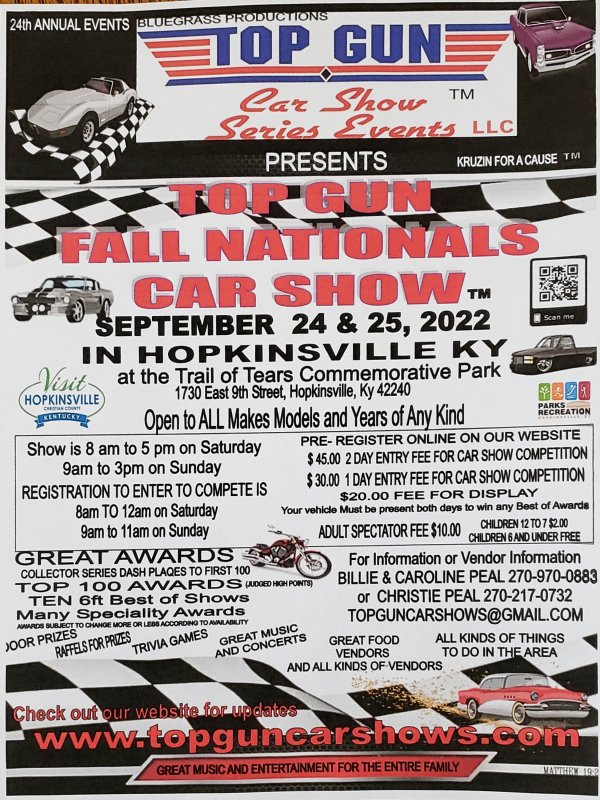