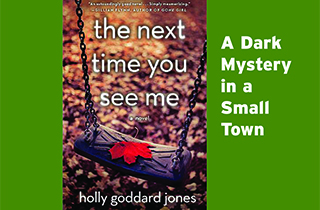 Russellville native Holly Goddard Jones takes her readers on a dark journey in her first novel, The Next Time You See Me (www.SimonandSchuster.com, $24.99). The mystery centers around several main characters and their connections with a hard-living woman gone missing. Each character exhibits both a humane side and a not-so-nice side, leaving the reader unsure, at times, about the characters’ mental stabilities.

Jones has masterfully avoided writing in a particular genre with this novel. During chapters written from Emily’s or Christopher’s point of view, middle school students in two very different social circles, the novel leans toward a young adult feel. However, Jones switches gears to a gritty adult novel when writing from the viewpoint of Wyatt, a lonely never-married older man, or of Susanna, sister of the missing woman. Despite this shift between ages, sensitive readers should be aware of some mature content and language.

Jones chose to set her story in the ’90s in the fictional small town of Roma, Kentucky.

“It’s natural for me to be drawn to writing about small-town life because I’ve lived the majority of my life in small towns,” she says. She reports that The Next Time You See Me is “very loosely inspired” by a crime that took place in Russellville when she was a girl.

“What I was able to see from that incident was the ways in which in a small town a tragedy reverberates on a different level than a single death probably would not in a larger area.”

Setting the story in the 1990s took out the element of rapid news spread that the world experiences today with technology and social media.

While the mystery of the disappearance is solved well before the end of the book, Jones leaves her readers to draw their own conclusions about the fate of the other characters, leaving their stories open-ended with no real closure, merely a hint of what is to come for each of them.

Jones has also written a collection of short stories titled Girl Trouble: Stories. She was honored with a Rona Jaffe Foundation Writers’ Award in 2007 and the Hillside Award for Fiction from the Fellowship of Southern Writers in 2013. She currently lives in North Carolina.