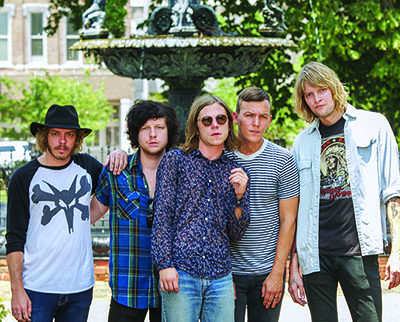 “You’re Cage the Elephant!” a young woman exclaims, a mixture of disbelief and excitement in her voice. “Can I have a picture with you?”

Matt Shultz, lead vocalist with the alternative rock band from Bowling Green, and Lincoln Parish, the band’s lead guitarist, are in Spencer’s Coffee House in downtown Bowling Green on a quiet Tuesday afternoon when the fan spots them. Matt and Lincoln signal her over, mug for pictures with her, and actually seem as pleased as she is with the unexpected encounter. A few minutes later another couple happens in, asks for a picture, and the scene repeats itself. Photos and autographs are now a normal part of the young musicians’ anything-but-normal lives.

A week later on a blistering hot Friday afternoon, Matt and Lincoln are back at the popular coffee shop, joined this time by the other three members of their now internationally acclaimed band: Brad Shultz, rhythm guitarist; Daniel “Tich” Tichenor, bass guitarist and backing vocalist; and Jared Champion, drummer and percussionist.

A few hours later, cell phone pictures taken by fans who happen to be there at the right time will appear on Facebook. Kandy Putty Fear writes: “Love this band, love Spencer’s Coffee! Bowling Green is where it’s at!!”

But right now, outside the coffee house there is no sign the band is back in their hometown. Cage the Elephant has been on tour all but 10 weeks of the past year and much of the previous four years. During that time, they also moved to England for 16 months “just because.” They huddled together in a small flat where they faced “not so kind” press and struggled (sometimes unsuccessfully) just to feed themselves.

Struggles were nothing new, they say, but they shy away from talking about the poverty many of them have known, for example. “Some things you just have to keep private,” Matt insists.

The five had never been far from the borders of Bowling Green when they crossed the pond, but they “kept plugging away,” Lincoln says. Success came, in Matt’s words, because they “played every show like it was the most important of their lives.” The music press saw this as “high energy,” and their fans loved their performances as well as their lyrics about real life. The group’s star began to rise.

Soon, they will be secreting away to write their third album, which is still untitled. The title comes last rather than first, they say. All they know is that this new album will be different from their 2011 album, Thank You, Happy Birthday, from Jive/Universal, just as it was different from their first album, Cage the Elephant, released June 23, 2008, by Relentless/Red Ink.

They pride themselves on their musical flexibility and joke that they have “music ADD (attention deficit disorder).” But really Cage the Elephant is just incredibly youngâ€”the oldest is 28â€”still learning and exploring and growing musically.

“No one knows what a band from Kentucky is supposed to sound like anyway,” Lincoln says. Laughter erupts as all five band members nod their heads and voice their agreement.

Starry Nights in September
Before the five men gather to create some new music, however, they are intent on creating something elseâ€”a music and arts festival outside Bowling Green called Starry Nights. Friend Bryan Graves got the festival started a few years back and asked them to take it to the next level.

“We’re choosing every band,” says Matt, his enthusiasm for the project evident in his voice. “We are also developing the aesthetic and feel of the festival. This is our way of giving back to the community that has given us so much.”

Adds Matt, “We want to give back some of the friendship, community arts, and freedom of creativity we got from Bowling Green.”

Bowling Green musicians’ town
Each member of Cage the Elephant is passionate about Bowling Green, how it influenced their lives, and its up-and-coming place in the music world.

The band members all met in the south-central Kentucky town; some still live there when not on tour. They all graduated from Greenwood High School. Most importantly, they all got their musical feet wet at an abandoned fraternity house called the Pirate Houseâ€”a “magical place”â€”where they came together to play music, party, and grow into professional musicians.

“Bowling Green is a really incestuous town for musicians,” says Matt, “but incestuous in a good way. We have all known each other since we were kids. We would play music together most of the night and then go and watch The Goonies before going to eat pancakes in the morning. Everyone has been in several bands.”

The musicians also say that Bowling Green is beginning to receive national attention as a music town, much as nearby Nashville is known for country music. Sleeper Agent, another Bowling Green-based band, is one of six finalists in a Rolling Stone “Women Who Rock” contest for lead singer. The winner’s photo will appear on October’s back cover of the popular music magazine. And then there is the astonishing number of bands coming from this small town.

Real rhythmic music
Besides the sheer number of bands coming from Bowling Green, the diversity of their sound is also noteworthy. That diversity is the result of the creative freedom found in Bowling Green, according to the band members.

Creative freedom is also the driving force behind Cage the Elephant. Other than the catch-all label of alternative rock, their music is hard to define. Many describe it as “real music,” meaning Cage the Elephant doesn’t rely on technologically created sounds like many bands. It’s catchy and rhythmic and swirls around in your head long after you have listened to it. Ain’t No Rest for the Wicked, the band’s iconic song, is a good example. The chorus goes:

Matt wrote the song during a period when he was working in construction, before the band became popular.

“There was a guy working with me who was also doing illegal activities,” Matt recalls. “He was always worrying about being arrested. I asked him one day why he didn’t just walk away from that. He told me, ‘There ain’t no rest for the wicked.’ I wrote the phrase down on a paper plate. We were playing three shows a week at the time, and I had to be at my construction job at 4 a.m. Most of the time I would play the show and go straight to work. I felt what he was saying, (was what) I felt that moment.”

Their music often comes from a moment, a chord, a riff, a phrase, a feelingâ€”snippets of real life.

Several members of the band hold out their cell phones and begin scrolling through what appear to be hundreds of items. They are ideas, they sayâ€”seeds. When they get together, they share these ideas. They see where each idea takes them musically, which seeds sprout.

Then democracy takes over. Everything is put to a vote.

“No matter how much you hate something, if four of the five like it, it’s in,” says Jared, the quietest member of the group. “Five heads are better than one.”

And while their music may be hard to categorize, the desired result is quite clear.

“We want to play music that gives our fans whatever they need,” says Brad.

“That gives them an emotional rise,” adds brother Matt.

“That is music we love,” says Tich.

Success for these 20-somethings is also pretty clear.

“To continue making honest music that we love,” says Brad.

“To keep making music and keep a roof over our heads,” says Lincoln.

“We know we are privileged to do this,” says Tich. “Not everyone gets to do what they love. We are blessed. We try to help younger bands get in the position we are now because we were once in the same position they are now.”

Which brings us back to the reason they are back home in Bowling Green.

MEET THE BAND
Three things we bet you didn’t know:

* loves to play chess and plays a lot online

* was the drum major of his high school marching band

* used his dad’s drum set until three years ago

* didn’t own a guitar until he was 22, he used Lincoln’s until then

* produces other bands, singers, and songwriters

Where: Ballance Farms in Oakland (just outside of Bowling Green)

Lineup of bands: Cage the Elephant, Portugal. The Man, Manchester Orchestra, MiMOSA, Justin Townes Earle, The Whigs, Sleeper Agent, Moon Taxi, JEFF The Brotherhood, Margot & The Nuclear So and So’s, Morning Teleportation, Wild Belle, Space Capone, PUJOL, The Kingston Springs, Five Knives, Bad Cop, and more. This was as of press time, but check their Web site for an update on bands.

The music scene in Bowling Green is hot, and there are several bands that Cage the Elephant members believe are on the cusp of achieving fame. Go to BG bands to read about these up-and-coming bands: Buffalo Rodeo, Canago, Morning Teleportation, Rainbow Kitty Kitty, Schools, and Sleeper Agent.