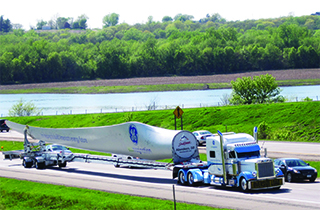 The first time I saw a semi hauling a wind turbine blade southbound on I-71, the size of the thing stunned me. The blade’s fat end was taller than the truck cab, and the wheels under the tapered end were almost three normal trailer lengths behind the cab. Talk about an oversized load! Within a few minutes, a second and then a third semi followed, each pulling another gigantic blade to complete the set.

That was years ago, when renewable energy devices were quite a novelty. Back then the value of adding renewable resources to the power grid was a hotly debated topic, with plenty of shouting on both sides. Renewables are a waste of time and money! Renewables can do everything! Extreme claims flew back and forth like the wind, and some of the early ideas, right or wrong, took on a life of their own.

After more than a decade of real-world experiments using wind, sunlight, and other unconventional resources to generate electricity, what’s true? Here’s a myth-busting reality check.

Myth #1–Renewables can replace all fossil fuels
Fossil fuels are a widespread choice to generate electricity because a coal or natural gas power plant can produce power around the clock and in all kinds of weather. Renewable energy resources are intermittent, not steady. Wind speeds change or die down completely. Sunlight is only available for part of each 24-hour day. Even the amount of usable water at hydroelectric dams can vary from season to season.

There are two ways to deal with the intermittent flow of electricity from renewable resources. One option is to improve batteries and capacitors that can store electricity when conditions are right to generate power, then release it during the lulls. The technology to do this is not yet well-developed at a large enough scale to be useful. For now, the electricity generated by renewable resources must be used in real time.

That’s a technical issue, and it’s a key reason why a complete swap of renewables for fossil fuels is unlikely.

So this myth is busted. Renew-ables cannot replace all fossil fuels.

Myth #2–Renewable resources can’t provide much electricity
At the individual local level, that’s true for the newer kinds of renewable energy. A single wind turbine may only generate a few megawatts of electricity, barely enough power for a small community. It takes dozens of solar panels to generate enough electricity for a single home. Burning wood chip waste or other forms of biomass may provide only enough power to use on-site at an industrial company.

For hydroelectric dams, that’s not true—they’ve been the big guys of renewable energy for decades, able to generate huge amounts of electricity, enough power for many big cities.

While the amount of power from dams has remained fairly constant over the decades, every year more and more electricity is being generated using newer forms of renewable energy. According to the U.S. Energy Information Administration, when grouped together, wind, biomass wood, biomass waste, geothermal, and solar now contribute about 6 percent to the nation’s electricity supply. Hydroelectric dams provide another 7 percent.

From a global perspective, the United States produces more kilowatts of electricity from nonhydro renewable sources than any other country. China is in second place, and Germany in third.

So this myth is busted. When you include hydroelectric power, renewables already provide a lot of electricity.

Myth #3–Sunlight and wind are free, so using renewable energy will be cheaper than fossil fuels
The cost of the fuel is only one part of the calculations needed to figure out what consumers will pay for electricity. The cost to build and maintain the generating facility—whether that’s a row of solar panels or a wind turbine or a fossil fuel power plant—must be included. The cost to transmit the electricity to the consumer must also be added in to the total. And that’s where it gets complicated.

Many of the best locations for solar panels and wind turbines are very far away from where a lot of people live. New transmission lines will need to be built to connect these remote locations to the existing power grid.

The kind of fuel used, the site where electricity is generated, and transmission lines are easy to see. But trying to make direct price comparisons among all the different ways to generate electricity is extremely difficult because of unseen influences. Requirements to add more environmental controls, tax laws, rebates, and special subsidies designed to encourage or discourage the use of one fuel over another must also be considered.

Recent studies about power prices have come up with mixed results. Wind might start out as the cheapest in a particular study area, but when the cost to build transmission lines is added in, wind power can be extremely expensive. Although the cost to manufacture new solar panels has dropped significantly during the last five years, they also require new transmission lines—and those are getting more expensive to build.

So this myth is not busted—but it’s not proven either. Nobody will know for sure if renewable energy is cheaper to use than fossil fuels until more transmission lines are built and larger quantities of renewable energy begin flowing through them to consumers.