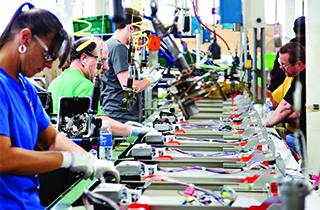 This column, and the one for next month, will look at the role coal plays in generating electricity, not just here in Kentucky but throughout the world.

Coal’s been used to generate electricity for consumers since 1882, but the technology has changed dramatically and varies from place to place.

Within the United States, an increasing number of rules govern how coal can—and cannot—be used to generate electricity. Yet worldwide, the amount of electricity produced from coal doubled between 1990 and 2010. Coal is the world’s largest single source of electricity, providing about 41 percent of the global power supply.

Will coal have a different future in different countries?

America’s coal-powered success story
One way to see coal as people in other parts of the world view it is to look at decisions made in America long ago. During the great age of rural electrification in the United States in the 1930s, newly formed generation and transmission utilities looked for simple, affordable technology to bring the benefits of electricity to their communities.

East Kentucky Power Cooperative, which generates and transmits electricity to 16 co-ops in 87 counties, chose coal. Tony Campbell, East Kentucky’s president and CEO, says, “There are a number of reasons why coal has been a good choice for us. Coal is the most abundant fuel that we have in the Midwest. The supply is diversified with several places to mine it and many ways to transport it. Coal is also a very reliable fuel because you can stockpile it—dig it at one time and burn it at another time. And coal is a low-cost fuel.”

For Big Rivers Electric Corporation, which supplies power to three co-ops in 22 counties in the western part of Kentucky, the choice was about more than coal’s local availability and low cost. Mark Bailey, Big Rivers’ president and CEO, says, “Using coal helps our economy. We spend about $220 million each year buying coal from local sources, most of them within 50 miles. That money has a significant economic impact for the mining companies here and their workers, plus all the jobs of the people they do business with in turn, and fanning out all through our regional economy.”

The positive economic impacts of using coal to generate electricity are statewide. Campbell says, “The low cost of coal has allowed us to attract heavy manufacturing businesses to Kentucky—companies that need low-cost electricity 24 hours a day, 365 days a year.” Factories in Kentucky use low-cost, coal-generated electricity to make cars, trucks, dishwashers, and hundreds of other items—and employ 220,000 people.

People in other parts of the world where coal is an abundant local resource are choosing coal today for the same reasons Kentuckians did long ago—to help their local and regional economies grow and prosper. They see electricity generated from coal as the foundation for their own success stories.

Protecting the environment with new technologies
The reasons utilities choose coal have stayed the same through the decades and around the globe, but the technology to use this resource keeps changing.

In the United States, the Clean Air Act of 1970 set in motion a long series of modifications to existing power plants and inspired whole new concepts for the design and construction of new power plants. The original law covers six specific items known as criteria air pollutants (carbon monoxide, sulfur oxides, nitrogen oxides, lead, particulate matter, and ground-level ozone). Each item had its own limit, and utilities had various timetables to follow to reduce each kind of emissions.

Meeting the new standards has been a work in progress for more than four decades as new forms of technology come into the marketplace. East Kentucky Power has spent about $800 million in coal plant retrofits, including installing scrubbers at its pulverized coal plants. The co-op has spent an additional $1 billion to build two fluidized bed technology clean coal power generating units. Big Rivers has invested more than $360 million to retrofit its coal power plants, adding scrubbers, precipitators, and selective catalytic reduction systems.

Emissions of criteria air pollutants from America’s coal-based generating fleet (about 550 power plants) have been reduced drastically. Globally, utilities in many other countries are also retrofitting their older coal power plants or building new ones based on the latest technology to control those particular emissions.

Greenhouse gases are different from criteria air pollutants. Next month we’ll take a look at the impacts of new regulations being put forward in the United States about carbon dioxide emissions from power plants—and how electric utilities are responding.

Coal’s role in the global economy
“The importance of coal in the global energy mix is now the highest since 1971. It remains the backbone of electricity generation and has been the fuel underpinning the rapid industrialization of emerging economies, helping to raise living standards and lift hundreds of millions of people out of poverty.”