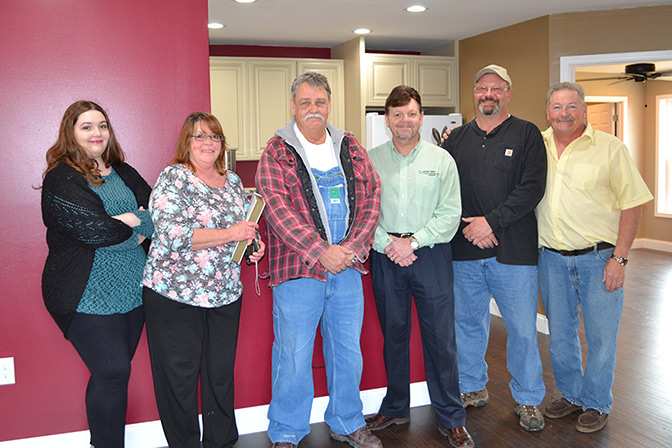 Brenda Eversole points to the round oak table and the intricate design on the high-backed chairs that sit in the dining area of her East Bernstadt home. It’s a new addition to the Eversole family’s home, and it wouldn’t fit in the camping trailer the family has been living in for five years.

Laurel County Habitat for Humanity recently held a dedication ceremony to welcome the Eversoles to their new home. Jackson Energy South Office Manager and Board President Tim Dyche turned over the keys, presenting the family with a Bible while asking for a blessing on the home and family.

Their old home, which sat on the same lot, was destroyed in the March 2012 tornado that roared through the community, leaving behind death and destruction. Dozens of homes were destroyed and five East Bernstadt residents lost their lives.

The Eversoles—Mike, Brenda, and daughter Kali—count themselves lucky to have survived. “Part of our home wound up over the hill in the woods,” Brenda says, recalling the night the tornado hit their house with the family inside, “and part came to rest against the tractor trailer Mike was driving. The Lord was sitting on our shoulders.”

The family has been living in a camping trailer since 2012, saving money until they could afford to build a home on the lot. With the help of the Laurel County Habitat for Humanity, construction on the three-bedroom house began last August. Habitat board member Blair Apgar began spending most of his time overseeing the day-to-day work on the project. Dyche said it was the second home built by the volunteer group in the last year and 17th built in Laurel County.

“Habitat, which uses the phrase a ‘hand up, not a hand out,’ isn’t a free house given to a family, like some people think,” Dyche explains. “The family will have a mortgage on the home and they invest at least 500 work hours into the project.” The project also receives support from volunteer labor, which helps keep costs down.

“You all are a wonderful organization,” says Brenda Eversole as the family officially receives the keys. “When I walk in this house, it says cozy and homey…It’s my beautiful and cozy home.”

For more information on Laurel County Habitat for Humanity, send an email message to larelcohabitat@yahoo.com.