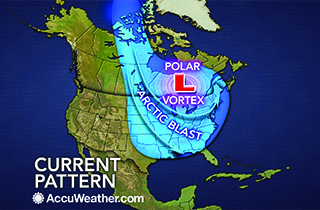 January’s blast of extremely cold air—a sinking polar vortex—set new records in Kentucky and other parts of the eastern United States. Here’s how power grid operators and individual utilities managed their systems to respond to the challenge.

Normal peaks, periods of high demand for electricity, occur daily year-round in late afternoon and early evening. To meet these daily changes in demand, power plant operators adjust the flow of electricity up and down from their core group of generators.

Utilities within each region of the United States coordinate which winter peaking units are operating, then send extra power through transmission lines to areas with the highest demand.

In early January, with all available generators running near their highest output throughout many states and demand continuing to rise, regional transmission system managers asked local utilities to use two strategies to keep the power system in balance. Utilities stopped sending electricity to some customers who’d previously agreed to have their service interrupted. Utilities also asked the public to voluntarily reduce nonessential electricity use. These conservation efforts prevented disruptions to the power grid as demand reached all-time single day and overnight levels in many states.