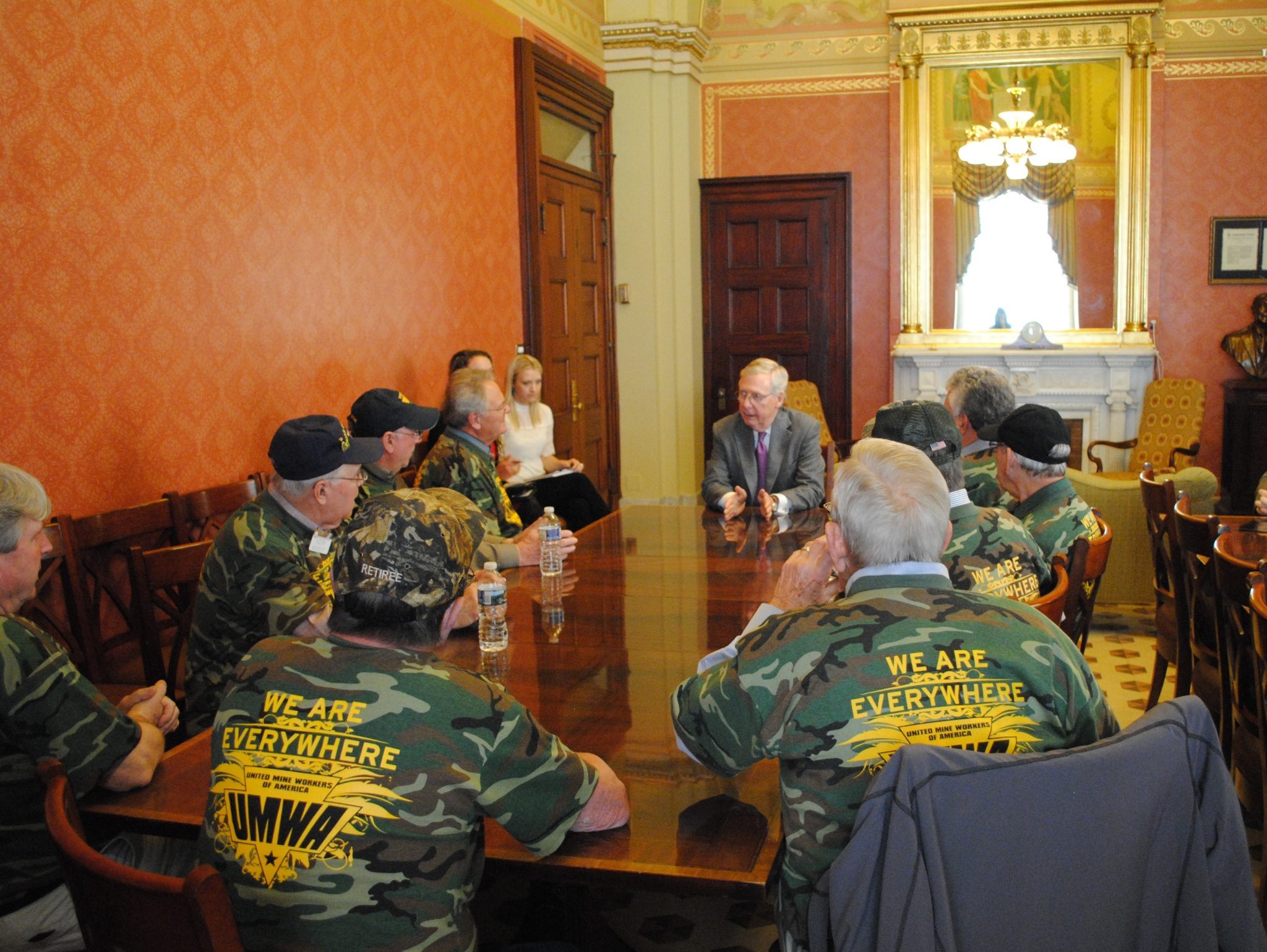 Majority Leader McConnell meets with UMWA retirees from Kentucky in his office in the U.S. Capitol.

Kentucky UMWA Official: “This is a tremendous victory, and Sen. McConnell played a decisive role in making sure it happened”

WASHINGTON, D.C.–U.S. Senate Majority Leader Mitch McConnell (R-KY) announced today he secured a permanent extension of healthcare benefits for thousands of retired coal miners and their families. Senator McConnell, who met with Kentucky miners on a number of occasions to discuss the issue, secured the measure–which is taken from his own HELP for Coal Miners Health Care Act–in the FY 2017 omnibus appropriations bill. The Senate and the House are expected to vote on the bill this week.

“The provision I secured in this legislation will protect and permanently extend healthcare benefits for thousands of retired coal miners and their families,” said Senator McConnell. “I recognize that the extension of health benefits for this group of retirees will not address all of the challenges facing every Kentucky miner or retiree, but I am proud that it will help address many of the healthcare needs of thousands of miners who fell victim to the steep downturn in coal production.”

“22,600 retired miners, dependents, and widows–including more than 3,000 in Kentucky–can now live their lives without the anxiety of having their healthcare benefits cut off next week, next year, or at any time in the future. This is a tremendous victory, and Sen. McConnell played a decisive role in making sure it happened. Our sincere thanks go to him and all those in Congress who worked for this day to come,” said Steve Earle, international district vice president, United Mine Workers of America (UMWA) District 12, from Madisonville, Kentucky.

Congress has stepped in twice before–in 1992 and in 2006, with Senator McConnell’s support–to assist retired miners in securing their health benefits. When thousands more were at risk of losing their benefits at the end of 2016, Senator McConnell led Congress’ efforts to intervene again. Though he preferred a long-term solution at that time, he was able to secure a four-month extension of health benefits for certain orphaned retired miners and their dependents.

McConnell’s office says that over the past eight years, the coal industry and the communities it supports have struggled, in large part, due to overregulation by the Obama administration. Among other factors, excessive regulation has made coal more expensive and has put it at an unfair disadvantage in the marketplace, according to a news release from McConnell’s office. In the years since President Obama took office, well over 10,000 coal miners in Kentucky have lost their jobs and more than 25 coal mining companies nationwide have filed for bankruptcy. This has led to fewer active workers available to pay into an expanding retirement pool, leaving health benefits in jeopardy for thousands of miner retirees.

In January, Senator McConnell sent a letter to then President-elect Trump highlighting opportunities to work together to help coal country, including seeking a permanent fix to expiring health benefits for thousands of coal miner retirees.

“As your senator representing Kentucky, I’ve been fighting on behalf of our miners, and I look forward to continuing to work with the Trump administration to help provide much-needed relief to coal communities,” Senator McConnell added.