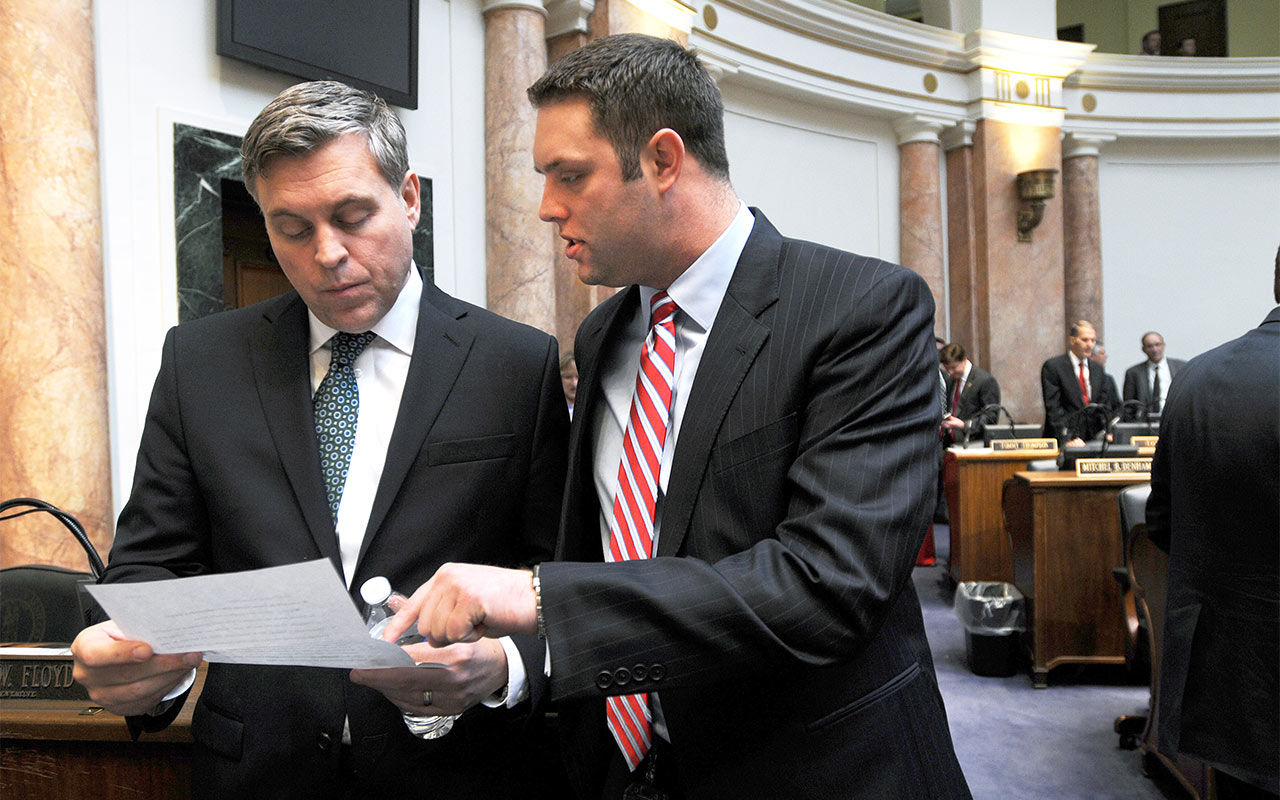 KAEC statewide association and other co-op representatives attend the Kentucky General Assembly, which meets annually at the state Capitol in Frankfort to interact with legislators on key electric utility issues. Shown in January during the 2015 General Assembly are Representatives John Tilley (Democrat) and Michael Meredith (Republican). Photo: LRC Public Information

Co-ops Speak Up For Member-Owners
Part 2 of 2

Last month we looked beyond the power poles in your neighborhood to the vast network of generators and transmission lines that bring power to the homes, farms, and businesses in your county. New national energy policy decisions that encourage more regional interactions among utilities have broadened the choices that co-ops have to supply you with reliable electricity.

But putting these new federal concepts into practice on a day-to-day basis requires more than a bunch of poles, wires, and high-tech computers. It also requires sound money management principles. Will the costs and benefits of these changes be spread out fairly and consistently? Who’s answering the tough questions to make sure that consumers and businesses who pay the monthly utility bills get good value for their money?

The power of working together
Each of Kentucky’s 24 local distribution co-ops and the two generation and transmission co-ops that provide your electricity belong to the statewide organization that publishes this magazine, the Kentucky Association of Electric Cooperatives (KAEC). Membership in KAEC gives the co-ops the opportunity to share information and practical advice among themselves, everything from safety to disaster response to technical know-how.

As an additional benefit, KAEC speaks on behalf of the co-ops to provide information to elected officials in the state legislature, in the governor’s office, various cabinets, and state agencies, including the Kentucky Public Service Commission, which regulates Kentucky’s electric utility industry.

This advocacy on behalf of co-ops and their members becomes even more important following August’s announcement of the national Clean Power Plan, which will have a huge impact on Kentucky’s energy future.

Chris Perry, the association’s CEO, says, “We represent 1.7 million people, with electric co-op members in 117 of Kentucky’s 120 counties. Our organization is a great example of how cooperatives work together, sharing resources. We represent our member-owners in Frankfort in many ways all year long.”

Chase Crigler, director of Community and Government Affairs for KAEC, says, “During each legislative session, our statewide association and representatives from the generation and transmission co-ops have a consistent and daily presence in Frankfort. We are constantly interacting with legislators, talking with them about hot-topic issues, and making them aware of issues they might not anticipate. We are always on hand to answer questions, dispel rumors, and provide the facts about all parts of the electric utility system. Then, when the legislature is not in session, we attend joint interim committee meetings around the state. We’ll meet with legislators anyplace they need us to be.”

Crigler says, “Legislators are concerned with jobs, and they’re worried about our state’s competitiveness in terms of power pricing. And they want to know that the lights are going to stay on for all their constituents. Knowing that, even with the many changes going on in the bulk power system, cooperatives will continue to be able to provide reliable, affordable power is important. That has an impact on economic development in communities throughout the state.”

An unusual chain of events shows how cooperatives must always be on the lookout for positive opportunities. A few years ago, Big Rivers Electric Corporation, the generation and transmission cooperative that provides power for three local distribution co-ops in western Kentucky, received approval from the Public Service Commission to add a new interconnection near Henderson to improve reliability in the multi-state region.

Shortly thereafter, a major industrial user in the area, an aluminum smelter, decided to stop buying electricity from Kenergy Corp., the local distribution co-op, and instead shop around on the open market. For a while, losing such a key customer for Big Rivers’ electricity threatened to up-end decades of careful financial planning, affect the stability of the power grid, and cause widespread major increases in the rate structure for all other electricity users served by Big Rivers.

But the same interconnections that made it possible for the industrial customer to buy its power from another source have also offered a workable solution for Big Rivers to use its generation capacity wisely. As a member of MISO, the regional transmission organization that serves 15 midwestern states and the Canadian province of Manitoba, Big Rivers can sell bulk power on the open market.

Big Rivers already has several new contracts to sell electricity generated in Kentucky on the open regional market, with a net savings of $13 million over projected expenses. Big Rivers CEO Bob Berry says, “As a result of this bulk power sale contract, the fuel costs for co-op members is much smaller than it would have been without the sale.”

Big Rivers has also requested in filings with the Kentucky Public Service Commission that any earnings on another bulk power sale to a customer in Nebraska be returned to retail consumers as a credit on their electric bills. Berry says, “Our co-ops’ customers here in Kentucky own us, so they deserve the benefit of this transaction. These are cooperative principles at work.”