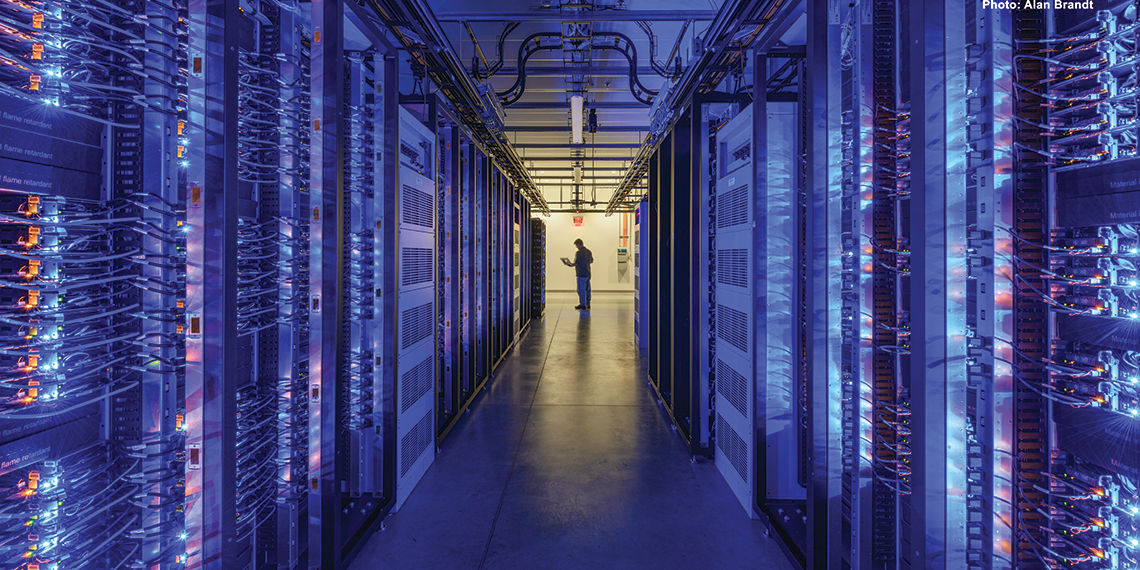 Today’s cyber world of interconnected computers, smartphones, and tablets depends on using electricity around the clock in real buildings. In Prineville, Oregon, a technician working for Facebook monitors rows of computer “servers” stacked floor to ceiling that handle data moving from friend to friend. This equipment room is just one of many inside a pair of specially designed 300,000-square-foot buildings. Each building consumes enormous amounts of electricity—not just for the computers themselves, but also for the complicated ventilation systems that keep the air temperature and humidity just right for sensitive electronics. Photo: Alan Brandt

Electricity makes the cyber world go ’round, and that’s huge

From the minute we wake up and unplug our mobile phones from their chargers, these little gadgets are our constant companions. We use them to talk, text, and send e-mails. Snap photos, share them with friends on Facebook, listen to music, check the weather, get driving directions, watch videos, pay the bills–our clever little devices can do everything.

The way the words, pictures, sounds, and data come and go seems like magic. It travels invisibly through the air until it reaches my phone or when I send something to your phone. But as much as I use it, my new phone doesn’t seem to need a lot of electricity. What we don’t see is the vast and unseen hard-wired system supporting my phone, your phone, and millions of other devices. It’s a system powered by a lot of electricity.

It’s not just our phones that give and take information—it’s music players, tablets and laptops, GPS navigation systems, e-readers for books, and entertainment consoles like Playstation and Wii. Our lives are filled with electronic gadgets trading bits of data back and forth instantly, all day and all night.

In today’s world, most of that information and entertainment comes and goes by way of “the cloud.” That makes it sound like using digital technology is something light and airy. But “the cloud” doesn’t really float up in the sky, so where exactly is it? And how does it work?

In the early days of technology, each piece of a computer network (a keyboard, a desktop monitor, a printer, a land-line phone and modem) had to be hard-wired and physically connected to the other pieces in order for them to work together. In today’s high-tech world, using “the cloud” allows any device anywhere to work like it’s connected to any other device—with or without wires in the middle.

“The cloud” is a three-way system. At the front end are our consumer gadgets such as phones, laptops, and game consoles. At the back end are giant computers (called “servers”) that hold the information and entertainment we want to use. One role for these servers is to act as an enormous storage system, a library of sorts. But instead of shelves of printed books or racks of CDs and DVDs, all the information is in digital format inside the computers.

The middle of this system is what’s really different today. The commands traveling between the front and back ends are sent using the Internet. In the case of mobile phones and many other consumer devices, this is done using radio technology—and that’s the wireless part of “the cloud.”

However, the back end of cloud computing is still very much a hard-wired world. In down-to-earth locations like Oregon and Oklahoma, warehouse-size buildings contain masses of gigantic computers that use a lot of energy around the clock.

The amount of data shifting back and forth between our consumer devices and those hidden back-end servers has reached such a staggering volume analysts have invented a new number, the “zettabyte.” That’s one thousand billion gigabytes—or to put it another way, the number 1 followed by 21 zeros. And each “byte” contains 8 individual pieces of data.

It’s no wonder that some people now describe this vast and complex digital world as an ecosystem. In the natural world, an ecosystem depends on energy from the sun to keep it going, to grow the plants that feed the animals and so on in a continuous cycle. In the human-made world of the information-communications-technology (ICT) ecosystem, the force that powers all the action is electricity.

A recent study by the Digital Power Group says that the global ICT ecosystem already uses almost 10 percent of the electricity generated worldwide. The report also says that while charging up your personal smart phone or a single tablet computer only uses a very tiny amount of electricity at the front end, what you do with your device after that has a profound effect on electricity consumption in the back-end portion of “the cloud.” The report says that if you watch one hour of video each week, in a year’s time the amount of electricity used by the unseen servers will be more than what it takes to run two new refrigerators.

The challenge for electric utilities is to provide blink-free electricity around the clock to run those computer servers, plus the sophisticated HVAC systems that keep the air temperature and humidity exactly right for high-tech electronics.

But many of the companies that own and operate the computers we access through ”the cloud” want more than just steady power–they want the best combination of reliable and low cost electricity, and they want it generated in environmentally responsible, and money-saving ways. Powering our hi-tech world will be increasingly important for the future of electricity.