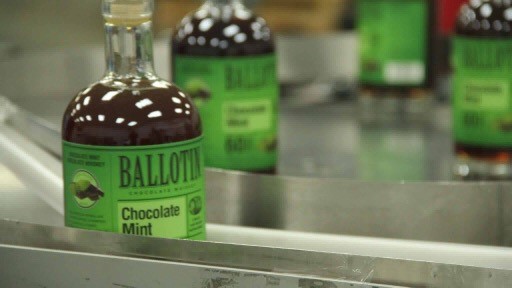 One burgeoning Kentucky-based company has launched an entire line of whiskeys that infuse these and other chocolate-based flavors (other offerings are Original Chocolate and the slightly ironic Bourbon Ball). Ballotin Chocolate Whiskey, based in Louisville, was the sweet idea of Paul Tuell, who spent two decades traveling the globe as a sales and marketing representative for Brown-Forman.

And before all the traditionalists turn over their whiskey glasses at the notion of these confectionary-leaning drinks, Tuell contends it is not as crazy as it seems.

“I never want to see a day when there is Cotton-Candy whiskey, believe me,” he says. “However, people have become more accustomed to drinks and foods that infuse flavors that they never would have thought of before. Plus, what we are infusing into our mix are all off the bourbon flavor wheel.”

Tuell also sees his 60-proof line as a way to introduce folks who are not quite ready for, or interested in, the sting of 100-proof bourbon.

“The sweetness in Ballotin makes for a great after-dinner drink,” Tuell says. “”I also see Ballotin easily becoming a new brand added to committed bourbon drinkers’ short list of choices when they crave an easy sipper.

“We’re aiming for accessibility, while not forgoing whiskey credibility.”

From Brown-Forman, Tuell moved to Papa John’s International where he was vice president and brand director for North and Latin America. There, he led the division’s creative development and brand marketing strategy for two years before leaving to create Spicewood Branding and Spicewood Distributing, consultancies assisting beverage alcohol and other companies with marketing, brand representation, and distribution.

Since opening in 2015, Ballotin has been introduced in stores across Kentucky and is now available in a dozen other states. Not bad for a corporate team that consists of Tuell, his wife Lisa, and Jeff Stum, director of sales.

“We have had some success around the country,” Tuell says. “But it’s really meaningful to be embraced here in Kentucky, here in the heart of bourbon country. We think that is a good omen of things to come.”