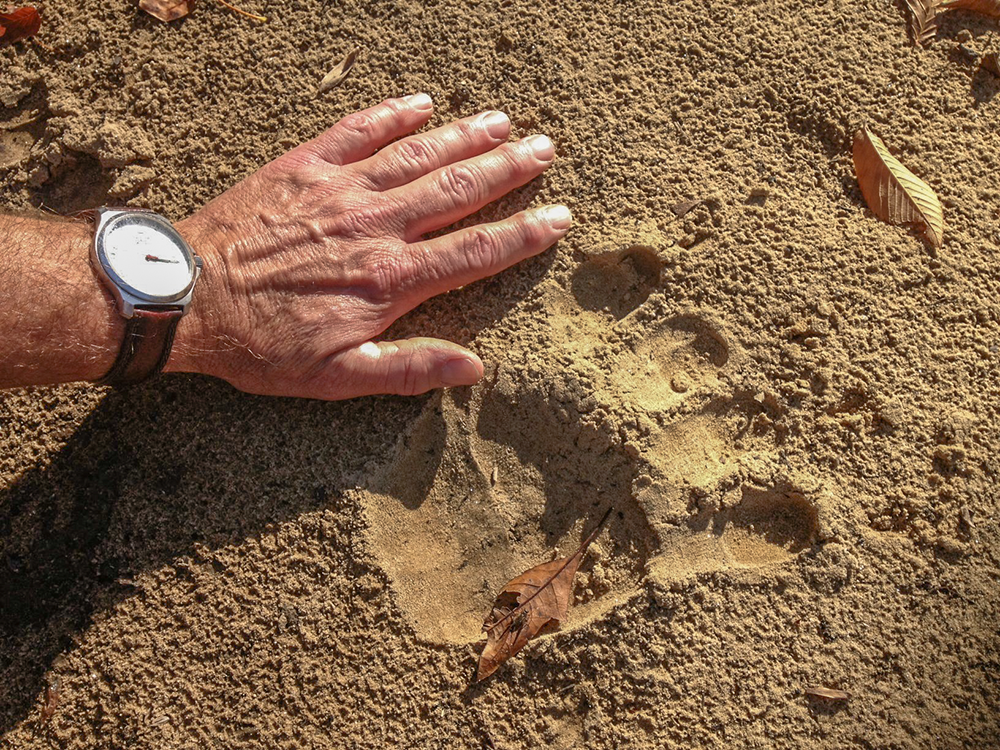 The autumn leaves were at their peak color, turning the forest into vibrant hues of red, orange, and yellow. It was a beautiful day to be hiking. As I walked alongside the Little South Fork of the Cumberland River in McCreary County, absorbed in the incredible scenery, I glanced down and noticed a large indistinguishable track.

A few feet away I saw another track in the soft sand along the river. The track was almost perfect and it looked recently made. As I put my hand next to it for scale and took a picture, I began to ponder just what that creature could have been. It was four-toed and big, whatever it was. It was too big for the biggest of dogs. Was there a mountain lion in this wilderness? Suddenly I got a little nervous and developed eyes in the back of my head.

After my imagination ran wild all the way back home, I did some research on animal tracks and, to my surprise, discovered that the beautiful track I had come across was made by a black bear. Bears have five toes, but often the fifth toe doesn’t register, which leaves a track that could be confused with a big cat, which has four toes.

With all of my years in the great outdoors, I’ve come to recognize some of the more common tracks, like those of white-tailed deer and a few others. But the confusing black bear track could have had me calling the Kentucky Department of Fish and Wildlife with news of a mountain lion roaming around McCreary County.

Newly interested in tracks, I pored over information online and in books. I made an impression in soft dirt and watched how it weathered over the next few days. This would teach me how to tell if a track is one, two, or three days old or at least get me in the ballpark. I learned that after a measurable snowfall it’s a great time to go out and look for tracks in the snow, with reference book in hand. The snow reveals the amazing number of critters that are out there, ones you don’t notice on grass or leaves.

You can make animal tracking as complex as you’d like. Tracking experts not only study footprints, but animal signs, from scratch marks on trees to the type of food the animal eats by closely examining its scat. It’s an activity enjoyed by hikers, hunters, and naturalists. And it’s the latest addition to my ever-increasing list of outdoor hobbies.