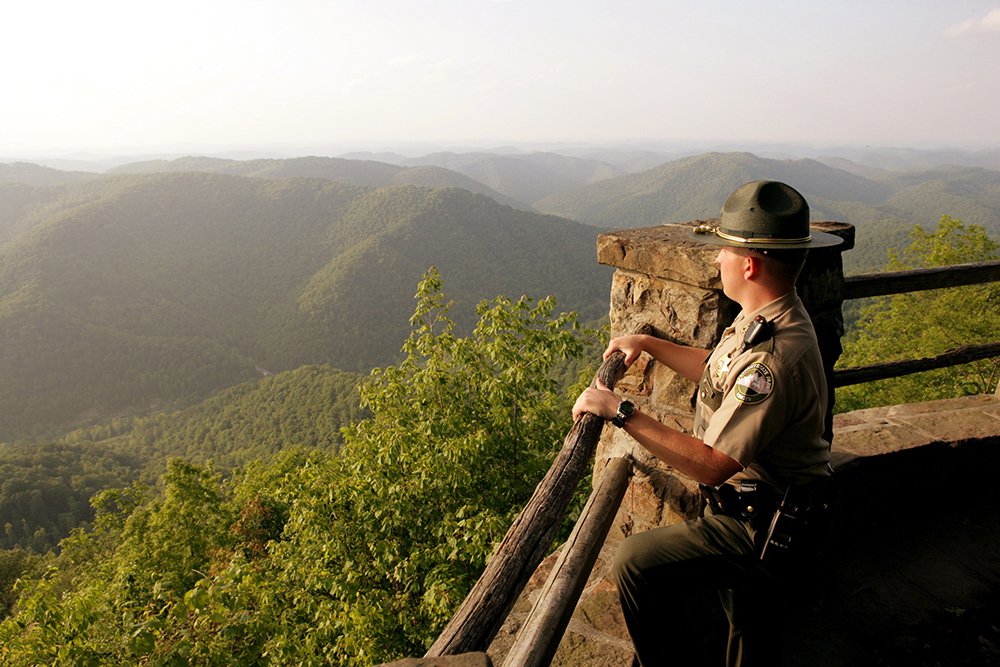 A park ranger soaks in the scenery at Kingdom Come State Park in Harlan County. Photo: Kentucky Department of Parks

Escape the heat at ground level

To beat the heat in August, you’ll need to head east. The temperatures at many of Kentucky’s high trails are noticeably different from the heat and humidity down at the base.

At Kentucky’s highest point, Harlan County’s Black Mountain, is 4,145 feet above sea level. As a hiker, I’ve been to Black Mountain several times, usually at the hottest time of the year to escape the stifling heat down below.

The difference is substantial. If it’s 87 degrees down at the town of Lynch at the base of the mountain, it will be approximately 73 degrees on top.

It works like this: The closer you get to sea level, the more pressure there is on the atmosphere. As you gain altitude, that pressure is being released, making it colder, much the same way as a carbon dioxide cartridge gets cold as the pressurized gas is released. As a rule of thumb, although not always exact, subtract 3.5 degrees for every 1,000 feet in elevation.

You can drive nearly to the summit of Black Mountain via State Route 160. Many say the winding road, with its mountain vistas, is prettier than the hike. However, I recommend getting out of the car and hiking the short distance to the top to get some exercise and say you’ve summited the highest point in the state.

A few miles away, Kingdom Come State Park, also in Harlan County, offers visitors some of the best high-trail hiking in the state. The 1,283-acre wilderness park is located near the crest of Pine Mountain, at 2,700 feet in elevation. So, if it’s 87 degrees at the base of the mountain it will be approximately 78 degrees on top. Here you can enjoy cooler temperatures while hiking trails along huge rock formations and scenic overlooks.

Another one of my favorites, Pine Mountain State Scenic Trail, will span 120 miles when completed. Long sections of it are finished, with parts of the trail rising to about 3,200 ft. If it’s 87 degrees at the base of the mountain, it will be approximately 76 degrees on top. Enjoy the cooler temps and scenery that will remind you of the Great Smoky Mountains.

So, pack a jacket and enjoy the weather up on the top this August. Imagine that, a jacket in August.