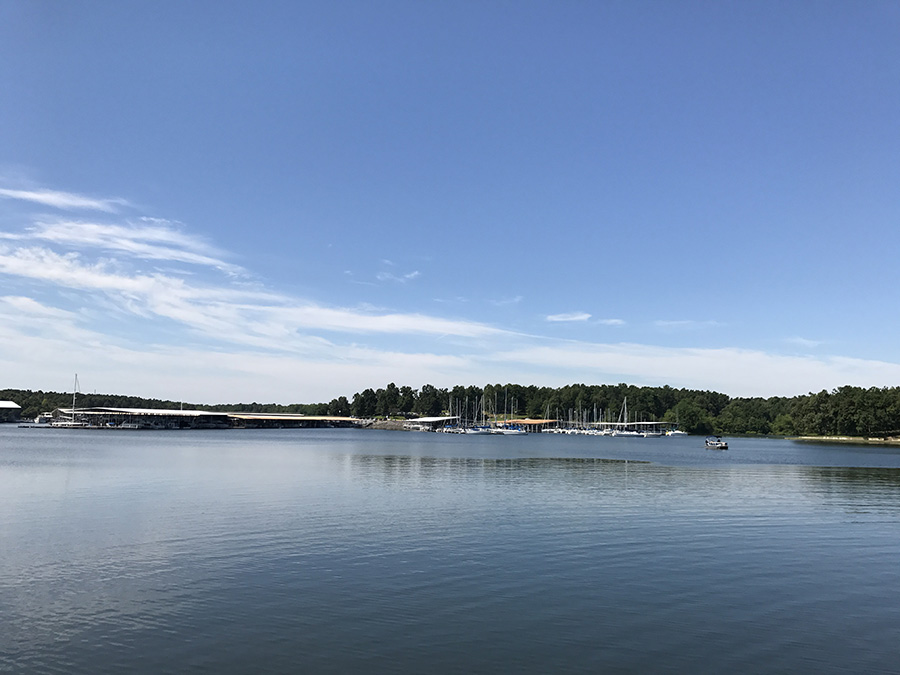 Whitecaps, swells, rollers and rogue waves are words normally associated with enormous bodies of water such as the Great Lakes or the ocean. But you don’t have to go that far to hear them when the wind gets up on Kentucky Lake.

Earlier this year, I took a small bass boat out on the main lake to see, perhaps foolishly, what the waves were like in just 12 to 14 mph winds. It was a very rough ride and somewhat nerve-racking. Stronger winds can create waves big enough to capsize small watercraft. It’s the angry side of an otherwise gentle giant.

Kentucky Lake, nicknamed “The South’s Great Lake,” is the largest man-made lake in the eastern U.S. It’s 2 miles wide and backs up the Tennessee River for 184 miles from western Kentucky down through Tennessee. The lake is so massive there’s no land in sight when you look down the middle of it. It’s as if you’re in a large bay looking out into the open ocean.

The flood of 1937 devastated the already impoverished region of rural western Kentucky and Tennessee. One year later, the Tennessee Valley Authority began construction of the “Kentucky Reservoir” project for flood control and hydroelectric power.

Today, Kentucky Lake and its smaller twin, Lake Barkley, provide seemingly endless outdoor recreational opportunities. Just one of those is the spring “crappie season.” Although there’s no official season for crappie fishing, anglers call it that because of the concise time period, usually around April 15, when crappie move into the shallows for spawning—and that’s when tourists come from across the country to catch them.

By summertime, the twin lakes are alive with lake lovers of all sorts—bass fishermen, pleasure boaters, jet skiers and those who enjoy the water aboard their houseboats. Visitors can stay at one of three state resort parks—Lake Barkley, Kenlake or Kentucky Dam Village—or at one of the many private lakefront resorts and marinas.

In between the two lakes is another paradise—Land Between The Lakes National Recreation Area. LBL is 170,000 acres of forest and meadows with ample room for hiking, biking, horseback riding and some excellent deer, turkey and waterfowl hunting.

There’s even something for stargazers—Golden Pond Planetarium and Observatory. If you’re a camper, LBL offers developed campgrounds or—my preference­—remote camping, somewhere along the hundreds of miles of undeveloped shoreline on both sides. Imagine pitching a tent and watching the sunset over the lake with no one else around.

Kentucky Lake, the Land Between The Lakes and Lake Barkley, when looked at as one unit, is perhaps our state’s grandest example of man’s ability to meet the needs of the people by building colossal technological marvels that don’t destroy, but enhance and protect natural resources. It’s a winning combination and one that makes me proud to be a Kentuckian.