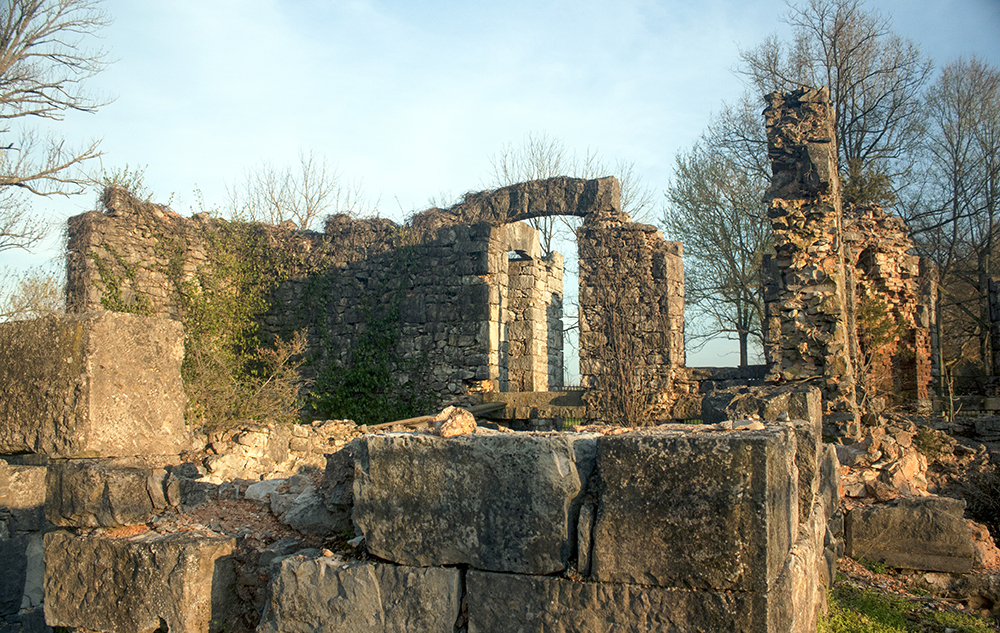 Bell's Tavern ruins are located in nearby Park City. It is also the southern trailhead for Mammoth Cave Railroad Bike and Hike Trail.

Mix of attractions keeps it fun in Cave City

Historically, roadside attractions gave weary travelers moving between larger cities something interesting to see or do on the way to their destination, especially with the advent of the interstate highway system in the late ’50s. Cave City has built a reputation as home to some of the best roadside adventures in the state—the motels are still there and there is much to be found in the way of tchotchkes and silly fun.

“The experience of roadside Kentucky is what I loved about the Cave City experience,” says musician Jyn Yates of Louisville, who grew up in the area. “The weirdness level excites me.”

For many, the memory of what Cave City meant to a childhood in this part of the country remains fresh. Southern Indiana real estate agent Paul Kiger recalls his family trips: “Every summer my family would take a weekend vacation to Cave City. I remember riding the go-karts, taking the chairlift up the ‘mountain’ to Guntown Mountain and driving the water bumper boats. Swimming in the hotel pool was also an extra perk.”

Kiger makes sure to include Cave City as part of his current travels. “I must say every time I take a road trip down I-65 South, I always get a little bit extra excited to stop by Cave City,” he says. “I alternate my routes through Horse Cave, so I can drive by the wigwams (teepee lodging).”

Cave City, as its name suggests, is the hub for one of the largest cave systems in the world—Mammoth Cave and Mammoth Cave National Park. Go to Cave City for the caves, but stay for the roadside attractions that range from Dinosaur World to the nearby ruins of Bell’s Tavern, built in 1830.

Heeding the call of the T. rex along the highway, travelers walk toward the Dinosaur World building smiling and giggling about what’s on the inside.

The first stop is the gift shop filled with items related to the age of dinosaurs, but the real prize is through the gift shop into the courtyard of Dinosaur World proper. Kids can experience fossil digs, finding several mini-fossils that they can bag and take home for a small fee. There is a free sandbox/dig area that is perfect for letting the kids work off some energy before and after hitting the dinosaur trail.

Kids may recognize some of the life-size model dinosaurs that are sprinkled throughout the trail, but all are clearly marked with their name and information about their lives. There are several photo opportunities along the trail and areas where visitors can reach out and touch the dinos.

Froggett’s is open on Saturdays and Sundays with daylong action, including its Wild West town hosting mock shootouts, music shows, a Western saloon complete with can-can dancers, stunt show, skits and games. Adding to the fun for an extra charge are a haunted hotel, blacklight golf, motorized Zippy Pets and escape rooms.

At the Kentucky Action Park, visitors can go horseback riding, brave some zip lining and caving, and play miniature golf. The park features over 500 acres of trails and caves where legend has it that Jesse James used to travel and hide out between robbing banks and stagecoaches.

The park is open seven days a week until Labor Day; after that, it is open on Saturdays and Sundays only. Miniature golf and riding stables are the exception, maintaining the daily schedule until the entire facility shuts down for the winter around November 1.

If you plan to stay overnight in Cave City and feel adventurous, try staying in the Wigwam Village Inn #2—a series of concrete teepees with motel amenities that include air conditioning and TVs.; www.wigwamvillage.com; (270) 773-3381. If you like your stay a bit more rustic, try the Yogi Bear’s Jellystone Park at Mammoth Cave. There you’ll have the option of camping or staying in one of the many cabins. RVs are welcome; www.jellystonemammothcave.com; (800) 523-1854.