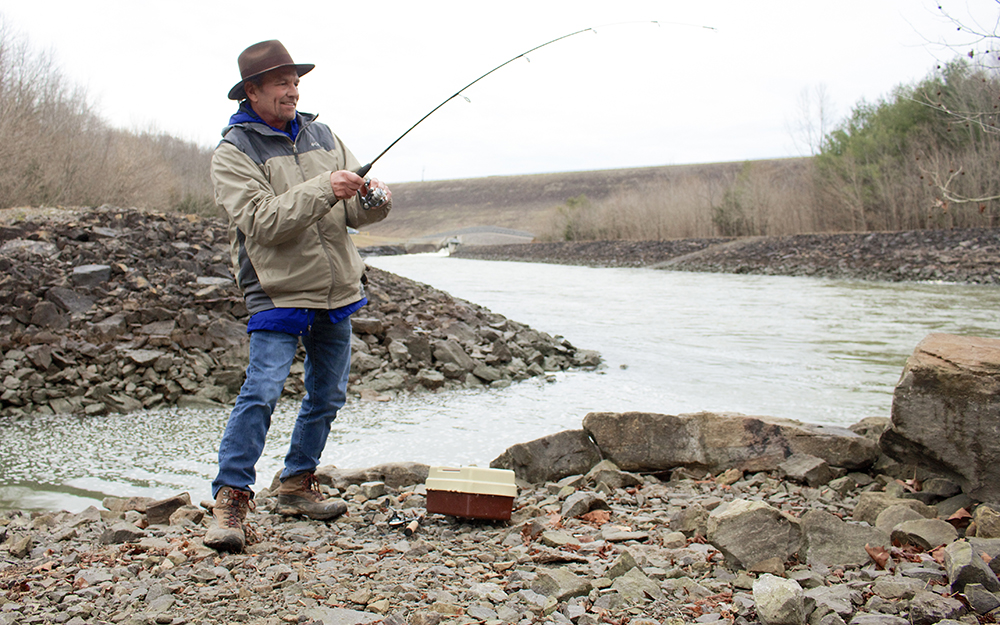 Knock the winter blues by fishing in tailwaters

One of those dreary February days amplified feelings of melancholy and the weariness of winter. It was dark, cold and spitting rain. Standing on a rocky bank below McAlpine Locks and Dam at the Falls of the Ohio River near Louisville, I reeled in several antidepressants in the form of walleye and its close relative, the sauger. The weather was awful, but walleye and sauger don’t like the brightness of a clear day.

Mid- to late February is the peak of the season for these tasty fish. They’ve made their annual run upstream to spawn, but were blocked by the dam. Unable to go forward, they congregate in the tailwaters (the discharge below dams) giving fishermen like me a late winter uplift on the gloomiest of days.

Fishing access can be found nowadays below most of Kentucky’s dams. You won’t be roughing it at the park-like settings below Wolf Creek Dam at Lake Cumberland, or the Tailwaters Recreation Area at Green River Lake, or the Tennessee River below Kentucky Lake, just to name a few. Bank fishing is excellent at these areas. Just be sure to wear warm clothing.

My favorite technique (of many) is threading a bright-colored, curly-tail grub onto a 3/8- or half-ounce jig using a light-duty rod and reel. The water coming from a spillway can be torrential at times, so you’ll need a heavier jig-head in those conditions. A tried-and-true method is vertical fishing. Walleye and sauger are bottom huggers so you’ve got to get your bait down to where they are by casting out from the bank, letting the bait fall to the bottom and then raising it up a few inches—or dropping a bait straight down under a boat.

It’s an unforgiving world down in the murky waters of the deep. Rocks and limbs and things are waiting to grab baits, spoiling the short-lived elation of believing there’s a big fish on the other end. Your line will get hung up occasionally, so don’t get too frustrated.

Catching a sauger or walleye on light gear is a beautiful feeling that has a way of making you forget about the blues and the cold, stinging rain and winter’s gray skies and the dread of paying off the credit card after Christmas and the… wait, what am I saying? Never mind me. Just get out to those uplifting tailwaters this February for some of the hottest fishing of the year.