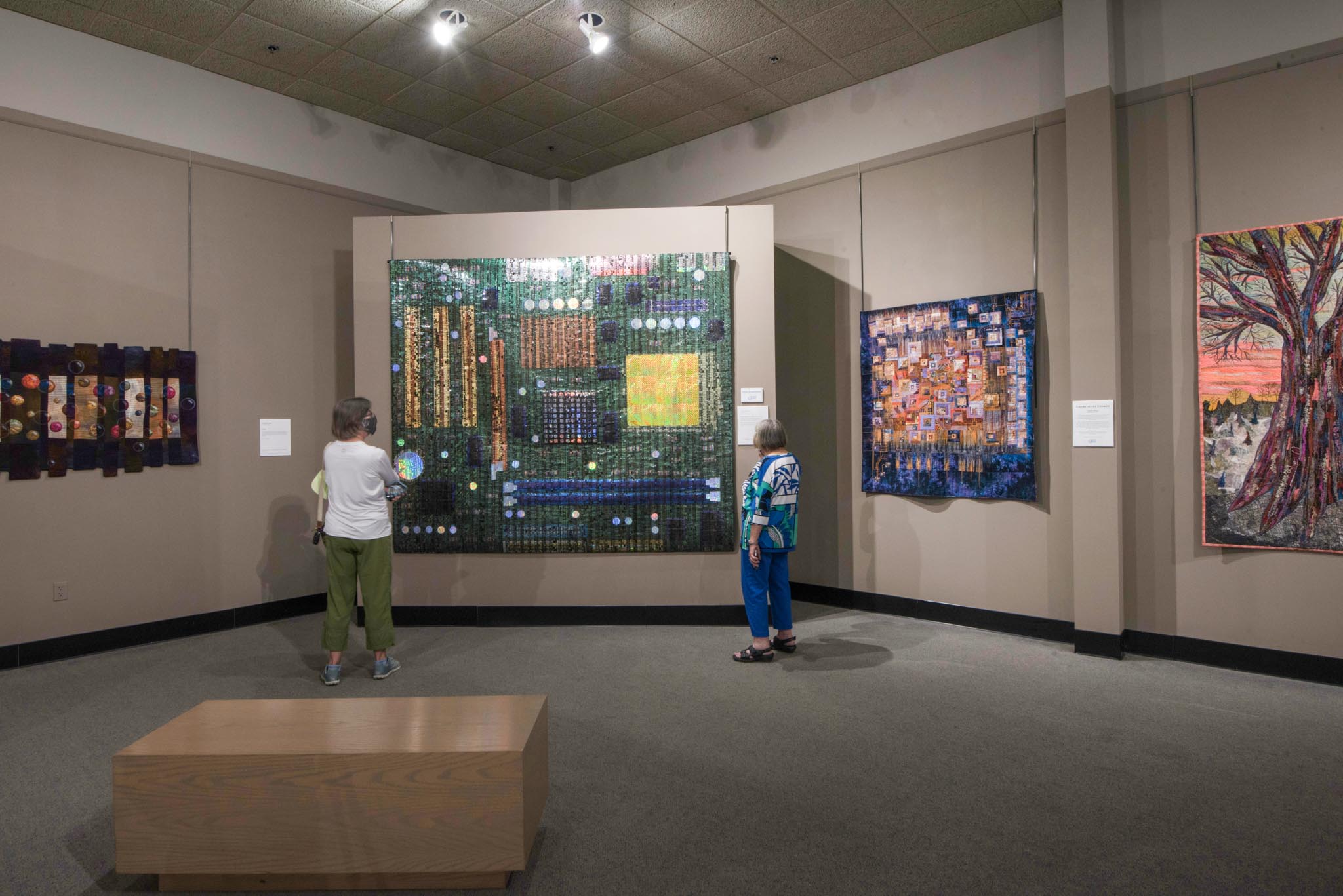 The National Quilt Museum in Paducah “is for anyone who loves visual arts,” says CEO Matt Collinsworth. Photo: Jolea Brown

AT THE NATIONAL QUILT MUSEUM in Paducah, a UNESCO Creative City in western Kentucky, visitors marvel at the intricate detail of Char #4, a quilt by textile artist M. J. Kinman that bursts with irregular diamond patterns in fiery shades of magenta, orange and gold. It’s one of eight quilts in Kinman’s Bourbon Diamonds series, an homage to iconic Kentucky bourbon distilleries and a nod to Kinman’s love of gemstones—but only Char #4 is in the museum’s permanent collection of 660 contemporary quilts.

The piece was inspired by the barrel charring process at Old Forester’s cooperage for barrel-making. Bourbon is aged in new charred oak barrels, and the char level, which ranges from one to four with four being the highest, imparts the delicate notes of vanilla and caramel that bourbon enthusiasts savor.

Kinman has lived in Louisville, an integral part of the Kentucky Bourbon Trail, for 30 years, and she says she wanted to “honor the process of shooting flame inside of a barrel, because that’s how you make good bourbon.”

Her quilt is just one of hundreds of quilts that highlight the talent of fiber artists from around the globe.

During the 36th annual American Quilter’s Society (AQS) QuiltWeek, April 27–30, thousands of quilters make a pilgrimage to the Paducah-McCracken County Convention & Expo Center to peruse an extensive collection of fine quilts, hone their quilting skills at quilting workshops and see who wins the AQS Quilt Contest.

Many wouldn’t dream of returning home without stopping at the National Quilt Museum. Three galleries with 13,000 square feet of exhibit space house a wealth of compelling fiber art by some of the world’s most prolific quilters.

But museum CEO Matt Collinsworth emphasizes you don’t have to be a quilter to appreciate the collections.

As he put it, “Do you have to be a painter to appreciate the Rijksmuseum in Amsterdam? The museum is for anyone who loves visual arts.”

Untamed Abstraction, an exhibit by award-winning quilter Shelia Frampton Cooper, is on view during AQS QuiltWeek and beyond (February 25–May 10). Known for her spontaneous, free-form process, Cooper finds inspiration in nature—a delicate butterfly outside her window or neon-hued tropical fish.

The wonder of the Land Down Under is seen in Australia Wide Seven, a traveling exhibit by Ozquilt network that provides American quilters a chance to appreciate the work of their Australian counterparts. Artists employ various quilting techniques to celebrate the living world, rejoicing in our planet’s abundance of flora and fauna while sometimes mourning the potential loss of this natural beauty.

Among them, Future Fossil 1 by Lois Parish Evans interprets the geopolitics of climate change and concerns about the environment. Leaves in muted tones of brown and blue honor the majestic gingko, one of the oldest trees on Earth, while recognizing the possibility that it could one day exist only as a fossil if humans continue to sacrifice the planet for economic growth.

Intriguing Iridescence by Zara Zannettino has a much lighter mood. Inspired by the luminous plumage of the nicobar pigeon, a spectacular bird native to Asia, the work has an intensity of brilliant, joyful color that seems to vary depending on the viewer’s angle.

The National Quilt Museum is much like Paducah itself. It’s steeped in tradition but always looking to the future. Just when you think you’ve got your head around the place, you’ll stumble across something spellbinding that makes you want to stick around and see what’s around the next corner.

TRACEY TEO lives in Indiana, but loves writing about her home state of Kentucky, and contributes to newspapers and magazines nationally.