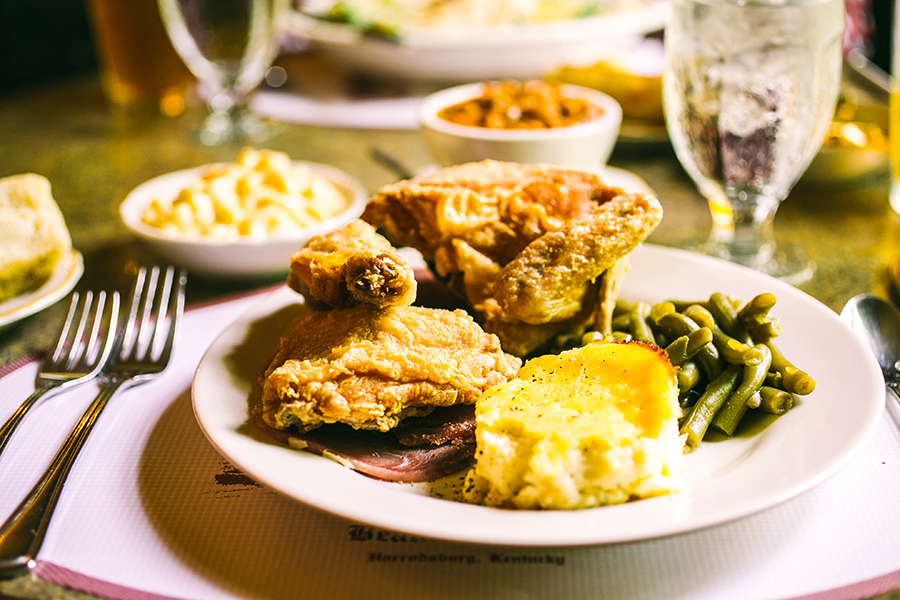 The Beaumont Inn’s famous corn pudding, shown here with the yellow-leg fried chicken, is a regional favorite and one of the inn’s most-often requested recipes. Photo: Beaumont Inn

Back in 1774, when Captain James Harrod and his expedition party were rustling up the evening grub at the fort they had just built in what is now Harrodsburg, they may have tossed a portion of the day’s kill—buffalo, turkey, rabbit, squirrel—into the stewpot. A few staples brought from the East (potatoes, corn, carrots) might have been added to feed the group that would populate Kentucky’s first settlement.

The result? Possibly the earliest recipe for what would become one of the state’s best-loved dishes: burgoo.

These days, it is more likely made with mutton and seasoned with garlic, cayenne pepper, parsley and other savory herbs and spices, but make no mistake: This rustic, meat-centric dish is front and center at many a Kentucky gathering.

Kentucky loves its unique food heritage, so much so that the Kentucky Department of Tourism and each of the state’s nine tourism regions cooked up a signature menu of traditional foodstuffs, guaranteed to have Kentuckians reaching for their napkins. This year has been declared “The Year of Kentucky Food,” as part of the state’s Better in the Bluegrass culinary initiative, and Kentucky State Parks set the table for serving the meals.

“The best way to get a sense of a place is through its food,” says Kentucky Tourism Commissioner Kristen Branscum. “A lot of states have one genre of food that’s associated with them or one iconic dish; in Kentucky, we literally have those iconic dishes and culinary stories across the entire commonwealth.”

CHECK OUT THESE “YEAR OF KENTUCKY FOOD” RECIPES

Further south, it’s fried chicken, Kentucky’s culinary gift to the world, thanks to the legendary Col. Sanders and his secret stash of herbs and spices. Head west for barbecue, the slow-simmered mutton kind. In the east, it is the soup beans that satisfy.

In the central part of the state, specifically Clark County? The dish born of a delicious collision of two palate pleasers—beer and cheese. And there’s an entire trail by which to indulge: The Beer Cheese Trail brings cheese zealots where it all began, to the Birthplace of Beer Cheese. It even has a Cheese Log so you won’t miss a single stop and can therefore earn the coveted Beer Cheese Ambassador status.

This ooey-gooey trail isn’t the only one in the state guiding foodies to Kentucky’s come-hither comestibles. Ten culinary trails show off their epicurean assets, including one of the most sip-worthy byways ever established, the hallowed Kentucky Bourbon Trail, and one celebrating a long-standing tradition among Kentucky farmers, The Country Ham Trail. It even has a festival feting the noble pig, held annually in September during Marion County Country Ham Days in Lebanon.

“There is a story of why we eat that particular food in that part of the state,” says Branscum. “Through the regional dishes that we put together for our ‘Year of Kentucky Food,’ you can have a truly unique visitor experience in each region through that meal.”

From now through the third week in October, nine Kentucky State Parks are serving the signature menu for their region, from appetizer to dessert, and accompanied by a traditional beverage. Think of it as a state park progressive feast with the evening meals extending over four months.

“Kentucky State Parks’ system holds a special place in the hearts of Kentuckians,” says Branscum. “Having the regional meals featured at the parks will not only be an incredible dining experience, but also a way for diners to learn more about Kentucky’s culinary history, which will hopefully inspire additional trips out into the state and return visits to the parks.”

Whether you sample one menu or all nine, expect to experience a selection of foods reflecting a given area and prepared in a way that would customarily be done in the area. On the side: a scenic setting and hospitable service.

“Each regional meal tells the story of the foods that many in that area have grown up with,” says Tom Brown, Food Service director with Kentucky Department of Parks. “And in that way, they help to tell the story of the park, as they have been an integral part of those communities with tremendous local support from the community.”

Find out where you can eat the full regional menus, and what to expect on your plate, below:

Beverage     Kentucky Rain cocktail (northern Kentucky’s 2018 Drink of the Year, made with Casamigos tequila, the spirit created by actor and Kentucky native George Clooney and a couple of his friends)