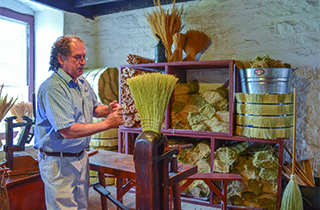 At Shaker Village of Pleasant Hill in Harrodsburg, visitors are intrigued by a broom-making demonstration in the Centre Family Dwelling, one of 34 historic buildings in this hamlet that interprets life in the revolutionary religious community that thrived here in the 19th century. A National Historic Landmark, this 3,000-acre property is the largest restored Shaker village in the country.

A craftsman slowly feeds broomcorn, a species of tasseled grass, into a machine called a broom binder. He secures the broomcorn to the handle by operating a kick wheel with his foot. As he pumps the wheel, steel wire wraps around the rotating broom handle that rests horizontally in the machine. After the bundle is removed from the broom binder, it is placed upside down in a broom press, a large clamp that flattens the broom so it can be stitched. Finally, the ends are trimmed evenly by a machine called a broom cutter.

The Shakers, more formally known as the United Society of Believers, are credited with inventing the flat broom. This humble household cleaning tool has been around for centuries, but it used to be round and far less effective at sweeping up dirt. The Shaker flat broom was the Swiffer cleaning device of the era and was in high demand. Records indicate the brooms were sold to stores as far away as New Orleans and St. Louis, as the Shakers took advantage of their Kentucky River access to trade goods down the Mississippi River.

An entrepreneurial, innovative spirit prevailed in Shaker communities, thanks in large part to Shaker founder Ann Lee, known as Mother Ann. She said, “Put your hands to work and your hearts to God.”

Work was a sacrament, so Shakers attempted perfection in all things. As a result, they became widely known for producing high-quality goods, such as brooms, seeds, and furniture.

“The Shakers loved technology,” Malusky says. “They were always seeking out new inventions that improved their lives or made day-to-day work easier. Several of our Pleasant Hill Shakers held patents and improved designs they made for machinery.”

Much of this “modern” technology remains on-site, and it’s fascinating to learn how it was used. The washhouse and kitchen are state-of-the-art work spaces that would have been the envy of the average 19th-century farm wife. The Shakers were among the first in the region to purchase cast-iron stoves and sewing machines.

Worship services were held in the 1820 Meeting House. Today, it has a sleepy quality, but during Shaker times, it was a lively place that reverberated with spirited singing and dancing. The name “Shaker” comes from the exuberant dances that were a hallmark of Shaker worship services.

The Shakers eschewed societal norms in favor of communal living, but there was strict separation of the sexes. Tenets of their faith included pacifism and celibacy. Shakers resided in their village as a large family, with men and women considering each other brother and sister.

Malusky says there’s evidence that rejecting individual impulses was often a struggle. “They were not wholly virtuous, perfect people. They had jealousies, fears, and insecurities like the rest of us. We see these reflected in their journals.”

At its height in the 1820s, Pleasant Hill was the third largest of 19 Shaker communities that stretched from Maine to Kentucky, but after the Civil War, it began to decline, and closed as a religious community in 1910.

Live the simple life
Those seeking “salvation” from a fast-paced, technologically complex world can check in to the Inn at Shaker Village for a taste of the simple life. While guests looking for relaxation can rock away their cares on the porch, there are hands-on options for those who want a bit more action, from make-and-take craft workshops to the 40-mile multi-use trail system that winds through a tranquil nature preserve in the heart of Kentucky’s scenic Bluegrass Region.

Overnight guests and day visitors who work up an appetite can head for the Trustee’s Office Dining Room. The menu offers a range of Southern comfort food like fried chicken and country ham but also includes lighter options. The offerings take advantage of the farm-fresh vegetables grown on the property—try them with a dollop of tangy-sweet homemade relish.

Malusky says she thinks modern guests living in an individualistic society can glean much about the virtues of selflessness from the Shakers.

“Guests can learn how it is possible to live in a society where people work toward a common goal, the benefit of the greater good and the village as a whole,” she says.

WATER AND WILDLIFE
Cruise through the Kentucky River Palisades on the Dixie Belle Riverboat, a paddle wheeler, and learn why the waterway was vital to the Shakers. Cruises depart from Shaker Landing. Cruises are daily April through October, $10 adults, $5 children ages 6-12, free for 5 and younger; weather and river conditions permitting.

The 1,000-acre Nature Preserve at Shaker Village of Pleasant Hill is one of the nation’s most successful wildlife habitat management areas. It’s a birdwatcher’s paradise, with more than 200 species of migrating and breeding birds. It offers a 40-mile trail system for hiking and biking (included with price of admission) and horseback riding ($10 daily fee or $150 annual pass for equestrian use of the trails).

LEARN & GROW WORKSHOPS
Learn & Grow Saturdays return to Shaker Village. Each Saturday through October at 1 p.m., guests will learn something in the garden or on the land that they can use in their own back yards. Here are the weekly program themes:

TRACEY TEO resides in Evansville, Indiana, but loves writing about her home state of Kentucky, and contributes to newspapers and magazines nationally.