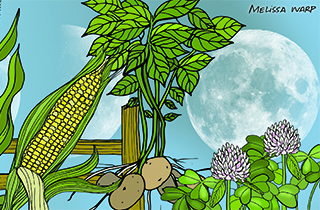 About this time each year—when the suddenly soft breezes stir among wildflowers and new grasses—Anthony Trammell’s thoughts turn to the moon and signs of the zodiac.

Trammell, who lives in the Pine Knot community in McCreary County and is a member of South Kentucky RECC, “plants by the signs,” as the saying goes.

He was once skeptical of the local old-timers’ rigid insistence on planting by the signs, but trial and error has changed his mind.

“I used to tell them the sign was right whenever the ground was,” Trammell recalls.

But after a few mediocre crop yields in the garden and on the farm, each followed by reminders from his elders that he had planted in the wrong sign or the wrong moon phase, Trammell, 52, tried it their way, with some noticeable success.

He now plants corn when the moon is new, and plants root crops such as potatoes in the dark of the moon, or when it is waning.

Many such beliefs have been passed down mostly by word of mouth for generations, but The Old Farmer’s Almanac, which dates to 1792, has been a benchmark reference for those who plant by the signs and the moon.

The almanac’s original editor, Robert B. Thomas, suggested mowing bushes, and “killing them if you can,” in the old moon (the last quarter until the new moon) when the “sign is in the heart” (Leo, July 23-August 22).

The 12 astrology signs and their coordinating dates can be found on zodiac charts in almanacs and often on planting calendars. Aries, the first sign of the zodiac, is attributed to the head, with the signs moving down the body, ending with Pisces at the feet.

Bennie Ray Bailey of Shelby County, a member of Shelby Energy Cooperative, was for many years the manager of a large farm supply store, and was a certified crop advisor.

He kept an Old Farmer’s Almanac in his office to answer questions from farmers as to when the time was right for planting by the signs.

“I’ve seen enough of it to believe it’s a sound practice, if you use common sense,” says Bailey, 72.

He remembers that one of the busiest times of the year for seed sales at the farm supply store was during the dark of the moon in February, when farmers liked to sow clover and grass seed.

“Planting is best done in the fruitful signs of Scorpio, Pisces, Taurus, or Cancer (when the signs are in the loins, feet, neck, or breast),” Foxfire sources advise. “Plow, till, and cultivate in Aries.”

“Set fence posts in the old of the moon to prevent loosening.”

And if you are not into farming and gardening, Foxfire also states that cutting your hair in Libra, Sagittarius, Aquarius, or Pisces will make it grow stronger, thicker, and more beautiful.