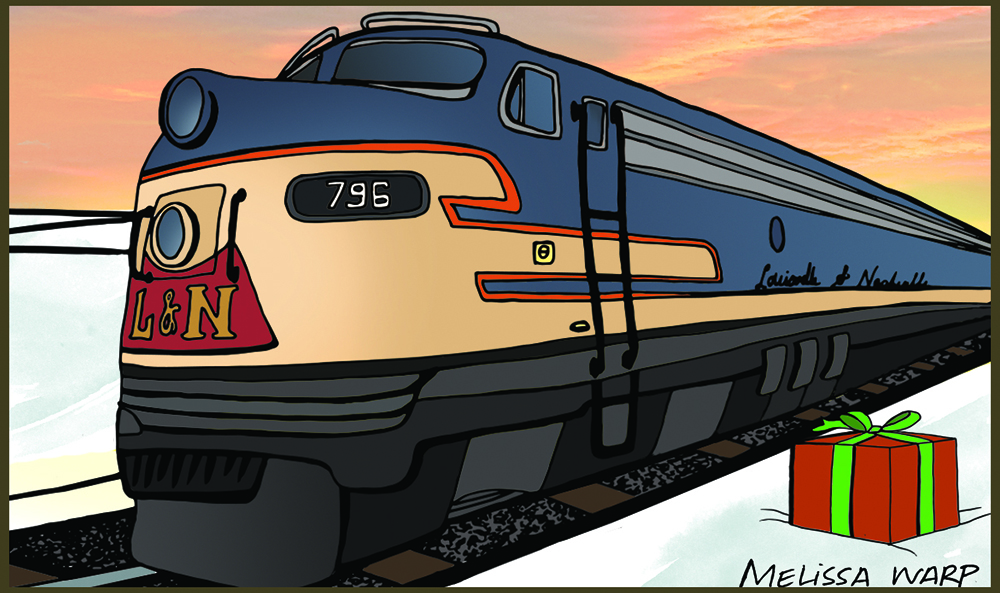 All too soon our bookmark moments of Christmases past are edged in poignant thoughts of loved ones no longer with us.

I suppose that is why many of us, each Christmas season, leaf through the pages of our memory books all the way to childhood—when the simple glow of lights on a tree, the toy section in a Christmas mail order catalog, or the magical spell of Christmas songs once lifted us to a place where only the mind of a child finds room to wander.

Esther Jo Long recalls a bookmark Christmas when she was about 5 years old—more than 75 Christmases past.

Her family lived in a two-story farmhouse in Shelby County beside what then was the Louisville & Nashville Railroad. Her father was a tobacco farmer; her mother a homemaker.

Esther Jo, the youngest, with four much older siblings, was often playing in the yard or “helping” her mother hang clothes on the line when trains passed. She waved to the engineer and to crewmen in the caboose who sometimes tossed a surprise to her from the train window: chewing gum, candy, or a coloring book and crayons.

Once, when the train was stopped, the engineer—who had a long white beard like Santa Claus—got permission from Esther Jo’s mother to let her board the big steam locomotive and blow the whistle. She still remembers the engineer’s name: J.J. Allen, from Winchester.

In those lean, post-Depression years of the late 1930s, her father had little to show for his hard work on the farm, but Esther Jo remembers a happy home.

On a Christmas morning when deep snow covered the landscape, she stood in the window beside their Christmas tree, waiting to wave as the train rumbled past.

“When we heard the train coming down the track, Mom raised the window…and I remember how we could hear it slowing down, slowing down, and we wondered if something was wrong.”

As the train slowed to a crawl, a conductor standing on the bottom step of a passenger coach gently placed a big box in the snow near the Morris’s side yard.

“I get emotional every time I talk about it,” Esther Jo says. “Of course I started jumping up and down, and screaming and carrying on, and daddy waded out in the snow and brought the box in.”

Inside was a beautiful doll that looked about 2 feet tall, wearing a long dress and bonnet. The attached note read, “From your railroad friends.”

Esther Jo would likely still have the cherished doll and note had not a fire destroyed the Morris home and nearly all their possessions, including the doll, a few years later.

But evergreen memories are fireproof.

Never a Christmas passes that the far-off echo of a train whistle doesn’t warm Esther Jo’s heart and call back the joy of that snowy morning when she was 5.

So sweet is the memory that she is still smiling.

Congratulations to Byron Crawford for receiving the 2017 Distinguished Rural Kentuckian from the Kentucky Association of Electric Cooperatives.