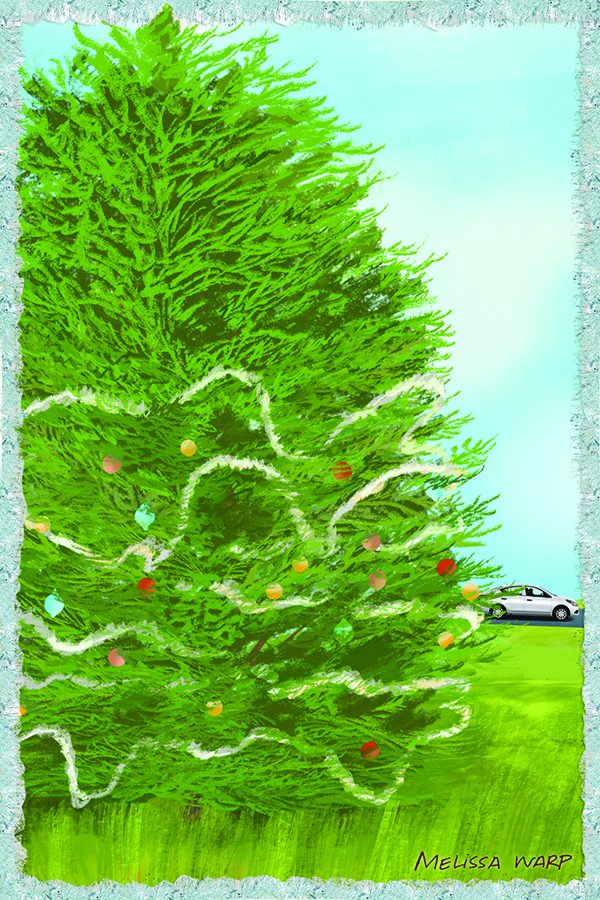 What story leads to this lonely highway décor?

Somewhere beneath the tangled tinsel of a Christmas past lies hidden the story of the loneliest Christmas tree in Kentucky.

That’s what I call the Eastern red cedar standing all alone on a grassy ribbon of roadside along the eastbound lanes of the Bluegrass Parkway in Nelson County.

I first noticed it as a blur out the SUV window while passing at 70 miles an hour two or three summers ago.

Had I just seen a Christmas tree all by itself stirring in the mid-summer breeze—strung with tinsel and ornaments—virtually in the middle of nowhere?

There was no time for a double take, and I was still about 2 1/2 miles from the U.S. 31E exit near Bardstown. But I promised myself I’d give the tree a closer look if it was still there when I passed that way again.

So back in August on one of those rare, lazy, white-cloud-and-blue-sky-days when time itself seems at rest, I pulled to the shoulder and studied the tree for a while, then got out and walked over beside it. I guessed it to be between 15 and 20 feet tall and maybe 8 feet in diameter at the base.

Though not a very pretty cedar as live Christmas trees go, someone had dolled it up with half a dozen or more strands of red and silver tinsel and upward of 80 nice ornaments, counting several that had blown off and were on the ground. (You don’t want to linger too long beside a busy highway, counting Christmas ornaments on a cedar tree in the middle of August.)

Some of the red, silver and blue ornaments were as large as a grapefruit and hanging as high as a tall person could reach. At least three solar lights were suspended from branches above the decorations.

There wasn’t a building in sight; nothing but woodlands and a long grassy meadow beyond the right of way that fell gently away to a creek.

A clerk at the convenience store a few miles away said she was pretty sure she’d first noticed the tree at least five years ago, but maybe longer.

Who decorated it, and why? Perhaps someone overwhelmed with the Christmas spirit? Maybe someone whose car—loaded with Christmas decorations—broke down near the tree one Christmas Eve. Or a lovesick young man or woman whose sweetheart often passed the tree. We may never know.

And while the lonely old cedar may never see pretty packages under its tired branches and faded ornaments, there is wrapped in its shadow the simple gift of a Christmas memory for a homesick traveler who, in the blink of an eye, may be carried back to warm thoughts of a distant Christmas past before vanishing out of sight in the fast lane.