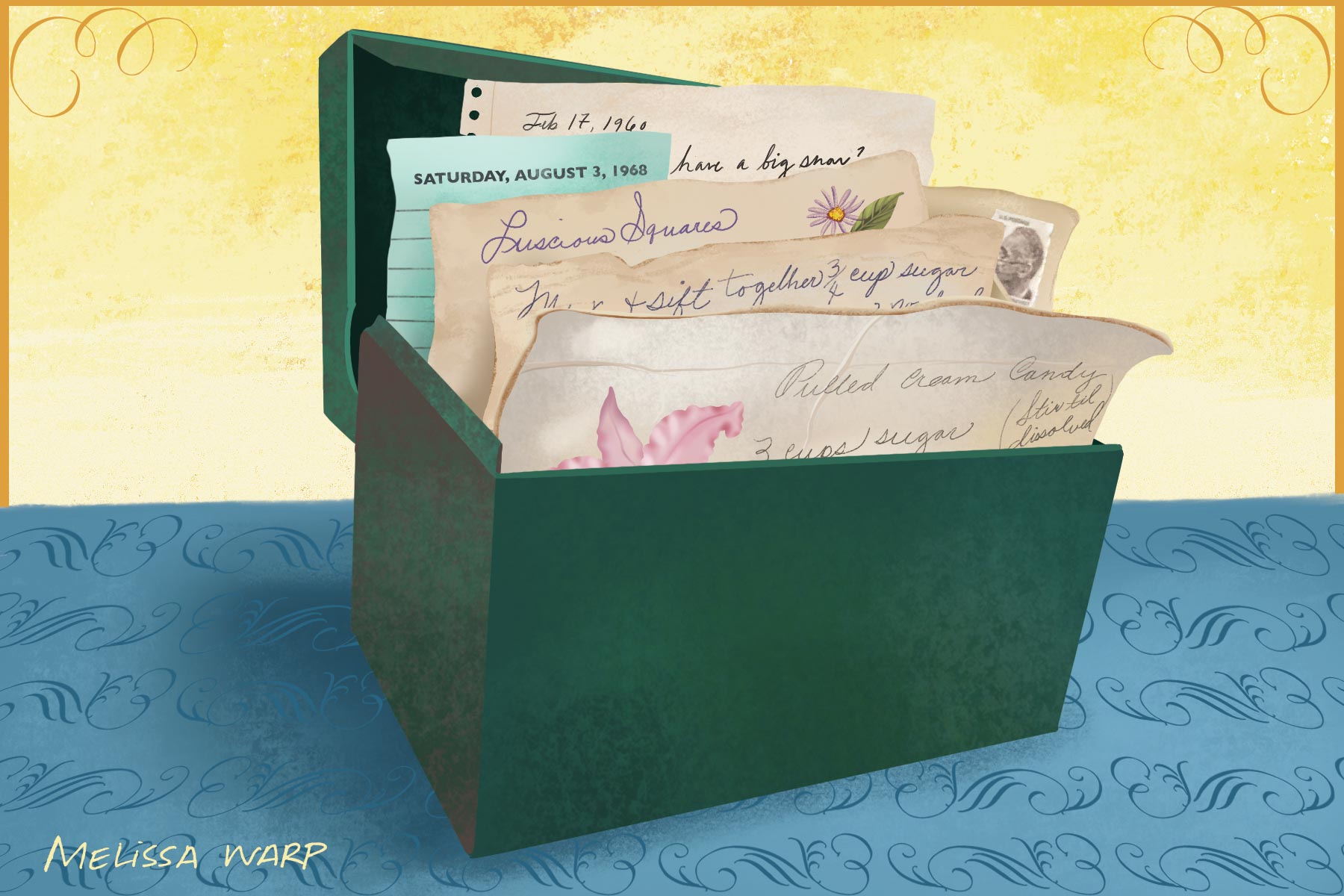 THE SMALL METAL BOX had been stored away among some of my mother’s possessions since soon after her passing several years ago.

It’s a 4-by-6-inch index card file like those many of our teachers kept on their desks during the pre-digital age. Inside, I found a collection of my mom, Lucille Crawford’s, dessert recipes going back to when I was a kid. Most were in her handwriting on random scraps of paper.

Apple Orchard Delight was written on the back of a letter from my Uncle Harry, who lived near Bush in Laurel County. It was dated February 17, 1960.

“Well, did you have a big snow? he began. “We had one that averaged around 12 inches. Some drifts were three feet deep I guess.” Many people there had the flu, he said, but he and Aunt Cinda had been well so far. They needed to get out to the grocery for a few things.

Family and friends were well-represented in the recipe box. Effie’s Pie, from my aunt Effie, began with 2 cups brown sugar, 1/2 cup butter and 3 egg yolks—so you know it had to be good. Bessie’s Buttermilk Pie was from one of mom’s dear friends.

A recipe saved on a bank memo from Danville was for Impossible Pie on one side and Transparent Pie on the other. I never remember seeing either pie.

My dad, a longtime consumer member of Inter-County Energy, had done some figuring on the back of mom’s Banana Fritters recipe, but there was no clue what all the numbers meant.

Somewhere in thumbing through recipes for the likes of Luscious Squares, Cherry Delights, Jelly Pie, 10-Eggwhite Cake and many others, I realized that—beyond the origins of my triglyceride reserves—I was glimpsing sweet footnotes of family history.

A page torn from a small desktop calendar dated Saturday, August 3, 1968, and used for a Hush Puppies recipe, would have been one day after my parents’ first grandchild, our oldest son, was born.

The Pulled Cream Candy recipe stirred memories of the old marble-top wash stand where mom always poured hot cream taffy to cool before pulling. Her instructions at the end said: “Pour on marble til it is cool enough to pull. Pull until it starts leaving your hands.”

Pullers would thoroughly clean and butter their hands before pulling ropes of the warm taffy. Dad once began pulling before the taffy was sufficiently cooled, and put on a memorable show trying to juggle hot taffy and pull at the same time.

I was probably barely out of coloring books when mom saved a clipping from the November 1953 issue of Rural Kentuckian magazine containing a recipe for White Fruit Cake from Mrs. John Taul of Route 3, Hardinsburg. White fruit cake would become one of my favorites, and years later the Rural Kentuckian would become Kentucky Living—whose back page seemed a likable place for this little reflection.

Thanks for the memories, Mom.