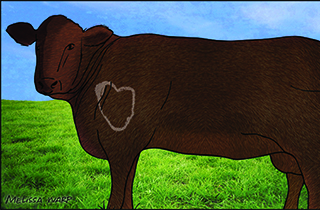 Someone could write a wonderful children’s book about “Miss Helen, the blind cow.” All I can do is tell you about her heart.

One sweltering summer day in 2000, David Feldman of Garrard County found a baby calf only a few days old, lying in the weeds, either too weak or too afraid to move. Her mother had left her and was cooling off with other cows in a pond some distance away.

This calf had been born blind in both eyes.

She was of undistinguished Angus stock and black, except for a small band of almost white hair on her side that, to Feldman, resembled the irregular outline of a heart.

Many farmers who own sizeable herds of beef cattle might have allowed nature to take its course and left the helpless calf to die. But David, whose herd numbers about 100, cradled the baby calf in his arms and took her home to a stall in the horse barn, where he and his wife, Cindy, and daughter, Brandy, began bottle-feeding the animal that was to become a part of their family.

They named her Miss Helen in memory of Helen Keller, the renowned American author and lecturer who was both blind and deaf.

The Feldmans’ Miss Helen was soon grazing in her own half-acre lot near the barn, where she quickly learned to find her way through the gate into a second pasture—and to the barn, water, and feed troughs, and elsewhere, as though she could see.

In the 13 years since she came to live with the Feldmans, her accidents have been mostly harmless brushes with gateposts or trees. She did step on one of her newborn calves a few years ago and broke one of its back legs, but the leg was placed in a cast, and soon the calf was romping in the pasture again.

Not only has Miss Helen given birth to several healthy calves, but she has raised orphaned calves and one set of orphaned twins, with a loving, gentle heart as though they were her own, says David, a member of Inter-County Energy Cooperative and owner of a lumber company in Lancaster.

“Seeing how she has endured all the things that have happened to her has been an inspiration,” he says.

Last summer she was beset by a life-threatening health condition. A veterinarian examined a large tumor near her heart and treated her, but gave her only about one month to live.

But once again, Miss Helen, the blind cow with the large, imperfect, outline of a heart on her side, has defied the odds. Her tumor has shrunk to about a third of its earlier size, and she is still living happily in her little corner of the world—reminding us all of the words spoken by a wise woman many years ago:“Although the world is full of suffering, it is also full of the overcoming of it.”—Helen Keller