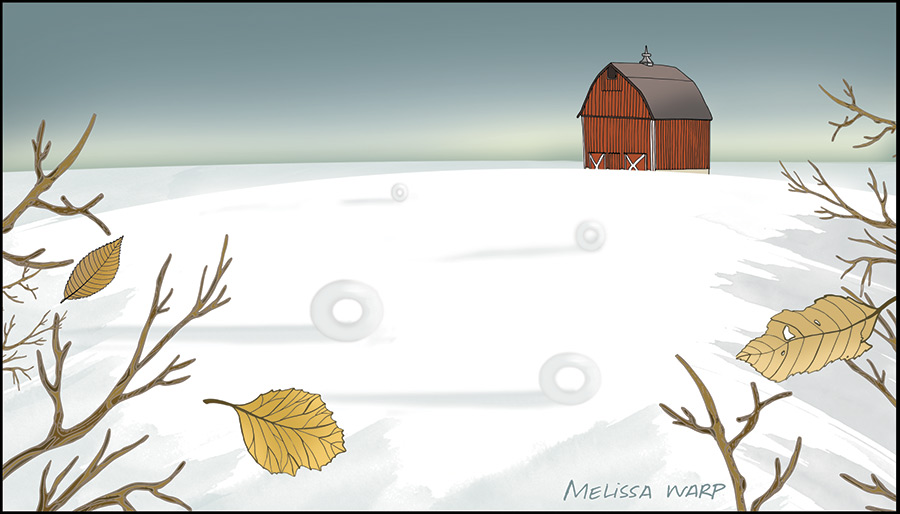 “Simply for the beauty of it.”

Tom Martin answers without hesitation when asked what so often draws him outdoors during Kentucky’s worst winter weather.
An author, photographer, and authority on the sport of rappelling, Tom recalls the severe winter of 1977 as the year he began his cold pursuit of beauty.

Snow and ice had brought much of Kentucky to a standstill that January, and Tom was visiting a friend in a local hospital when he overheard a woman tell of seeing hollow disks of snow in fields, which she said resembled doughnuts standing on edge.
Tom drove out with his camera to have a look and, sure enough, began seeing them by the dozens. Never had he seen anything like them before, and hasn’t seen them since. They varied in diameter from 6 inches in some locations to a foot or more on hillsides near Camargo in Montgomery County.

Warmer temperatures the day before and extreme cold that night had apparently produced a layer of snow of the perfect consistency that a strong wind had rolled it into hollow tubes, many of which were left standing upright like big white doughnuts.
“For many days in early 1977, all I did was explore God’s beautiful world,” Tom says.

Sometimes accompanied by a friend, but often alone, he searched hills, creeks, and cliffs in parts of Montgomery, Wolfe, Menifee, Powell, Lee, and Estill counties, and was amazed at what he found.

Waterfalls 60 feet high were transformed into pillars of ice, as though the cascading stream had stopped in midflow. Young hemlocks and pines were suddenly snow sculptures, and a dainty, frozen prism of light had become, for a few grand hours, the centerpiece of a rock shelter.

In a Wolfe County cave, stalagmites of ice, known as hydromites, had formed when drops of water from the cave ceiling froze on the colder cavern floor, creating graceful, crystalline columns. Tom found in a Lee County cave a forest of hydromites—many of them more than 7 feet tall—extending more than 100 feet into the cave from its entrance.

It was, he would write, like being transported to another planet where delicate columns of ice seemed like crystal buildings in a crystal city. Standing alone in the garden of ice—amid silence, except for the dripping of water from the cave ceiling—he was moved to tears by the beauty of the place.

His search for such sights continued during the severe winter of 1978-79, and he included many of his photos in a book called Kentucky Ice: A Winter Adventure (search for title online). Although conditions for such phenomena have rarely occurred as dramatically in Kentucky since then, he still goes looking for hidden beauty each time winter turns ugly.

If you try it yourself, Tom cautions, be careful of falling ice. Oh yes, and he wrecked his car twice on those early trips.