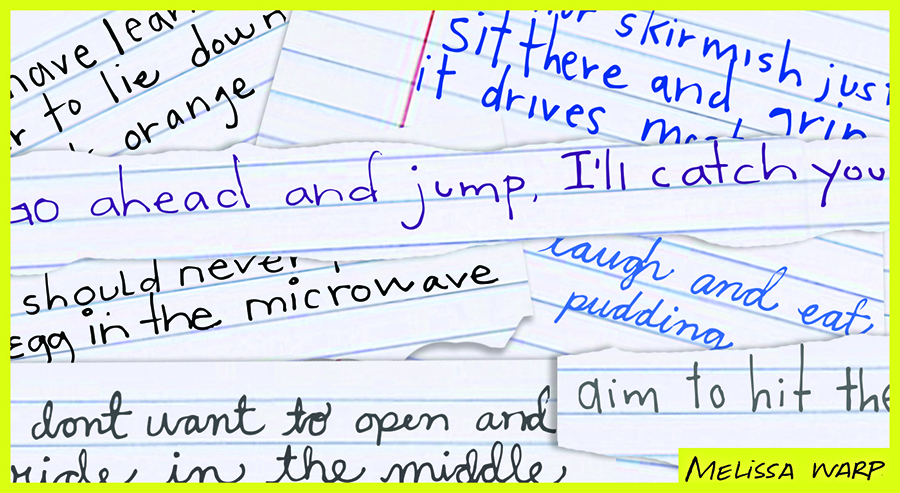 While searching a cluttered file for a long-lost photograph a while back, I came across a misplaced letter from a Grayson County Middle School teacher, dated January 1995.

I was a newspaper columnist in those days and had written a column about life lessons. The teacher, Donna White, had shared the article with her seventh-grade language arts students, then asked them to list some of their own life lessons to send me.

Having just written on the subject, I must have decided to save their notes for use in another column sometime down the road. But I didn’t intend it to be 22 years!

Though most of the “kids” would be in their mid-30s now, some of the lessons they wrote about when they were 12 or 13 are worth sharing, even at this late date:

Randy Swift wrote: I have learned not to copy somebody’s work, because the answers are not right.

Sean Mangan: I have learned never to lie down in the yard if you have a dog…or drink orange juice after you’ve brushed your teeth.

Landon Hayes: I’ve learned that when you have trees in your way at the golf course, aim to hit the one in your way and you will probably miss it.

Jamie Decker: I have learned never to trust your big brother when he says, “Go ahead and jump, I’ll catch you.”

Kevin Logsdon and Jonathan McKinney offered lessons that will be appreciated by our safety-conscious Kentucky Association of Electric Cooperatives’ staff and membership. Kevin’s lesson: I have learned that you should never put a raw egg in the microwave while it’s still in the shell.

Jonathan’s lesson, no doubt learned at a much earlier age: The plug-in outlets are not the place to keep your pennies and dimes.

Shannon Reedy: No matter what your brother says, don’t trust him when he says you can laugh and eat pudding at the same time.

Jo Williams: The best way to win a fight is not to throw the first punch. If it’s only a minor skirmish, just sit there and grin at them. It drives most bullies crazy. However, be ready to duck if necessary.

Cara Brooks: I have learned that if you live on a farm and you don’t want to open and shut the gates, you should ride in the middle of the pick-up.

Fortunately, I was able to find their retired teacher, Donna White, a member of Warren RECC, who still lives in Grayson County and is an animal rescue volunteer with the Grayson County Humane Society. She remembered the “life lessons” letter and was surprised to hear that I was reprinting excerpts in this month’s back page.

But she didn’t remember that she had ended her 1995 note to me with a life lesson of her own: “I’ve learned that there is nothing like having two college degrees and being stumped by a 2-year-old’s ‘why?’”