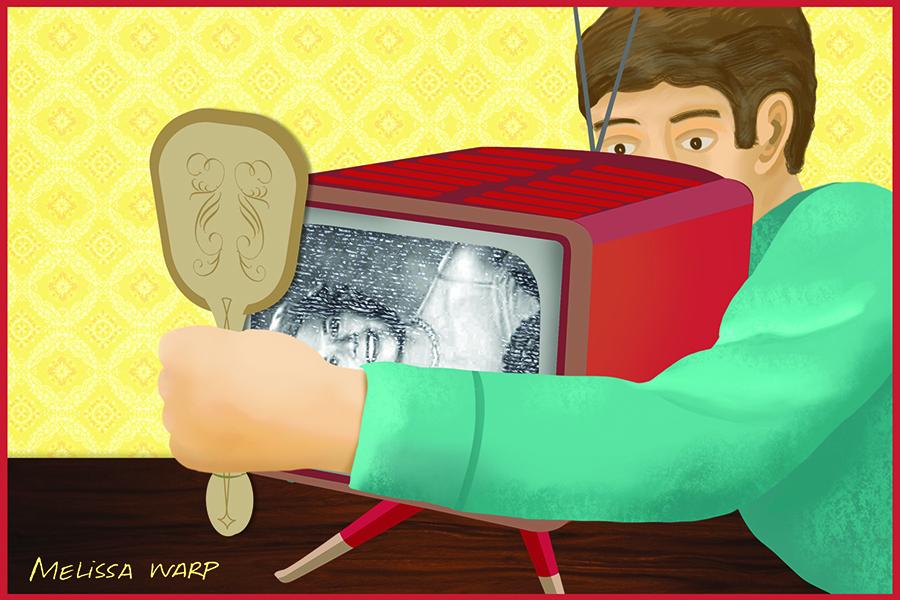 Family memories of the 12-inch black and white RCA

The old monkey wrench in an antique shop caught my eye and, for a moment, I was 10 years old again—turning the outside TV antenna, a large spider-like contraption that hovered over our central Kentucky farmhouse.

A monkey wrench—for those unfamiliar with the tool—is a heavy, adjustable wrench resembling a large pipe wrench.

Back in the mid-1950s, my dad left a monkey wrench pretty much permanently clamped to the TV antenna pole at our place where, every few days depending on the wind, someone had to go out and turn the antenna to sharpen the TV reception. This required others to stand at the back door and in front of the TV to relay word when the picture was back to “normal.”

The trouble was, often by the time the inside person yelled, “Stop!” whoever was turning the antenna didn’t get the word until they had gone too far.

We picked up only one channel on our little 12-inch black and white RCA, handed down from an aunt and uncle who had upgraded to a 19- or 21-incher. Those were the days of “rabbit ears,” “lead-in wires,” “converters” and other terms too technical to be explained here.

Television was just catching on in those days, and my dad—a no-frills guy if there ever was one—had steadfastly insisted he had no use for one. As a boy, he had run the projectors at a movie theater my grandfather operated in London, Kentucky, and maybe he thought he’d seen enough moving pictures. But the first night we had the TV, he and I watched till sign off near midnight. And early the next morning when I got up, Dad was watching the TV test pattern.

Soon, Chet Huntley and David Brinkley, the entire Mickey Mouse Club, Lawrence Welk’s orchestra and Maverick were all part of our family.

What’s more, Dad had become an “amateur” TV repairman.  Armed only with a screwdriver and an ornate, heirloom hand mirror that my mother kept on the dresser, he would tackle any difficulty that arose with the TV picture. His specialty was fixing problems with the horizontal and vertical hold, which occurred often.

I can see him now in his sock feet, kneeling beside the TV, clutching the mirror in his left hand so as to see the screen while fiddling with controls in the back.

My mother’s patience wore thin as frame after snowy frame of Dinah Shore would roll past, then suddenly sideways, until Dad finally got her stabilized.

“That’s good!” Mom would say sternly. “Leave it just like that!”

But Dad could never leave well enough alone, so sometimes by the time Hallmark Hall of Fame came on, we already had our own drama underway around the dysfunctional little 12-inch screen.

I’m telling you—if today’s fancy flat screens are all you’ve ever watched, you don’t know much about television.

Call me crazy, but I still have Dad’s screw driver and Mom’s hand mirror just in case there’s trouble.