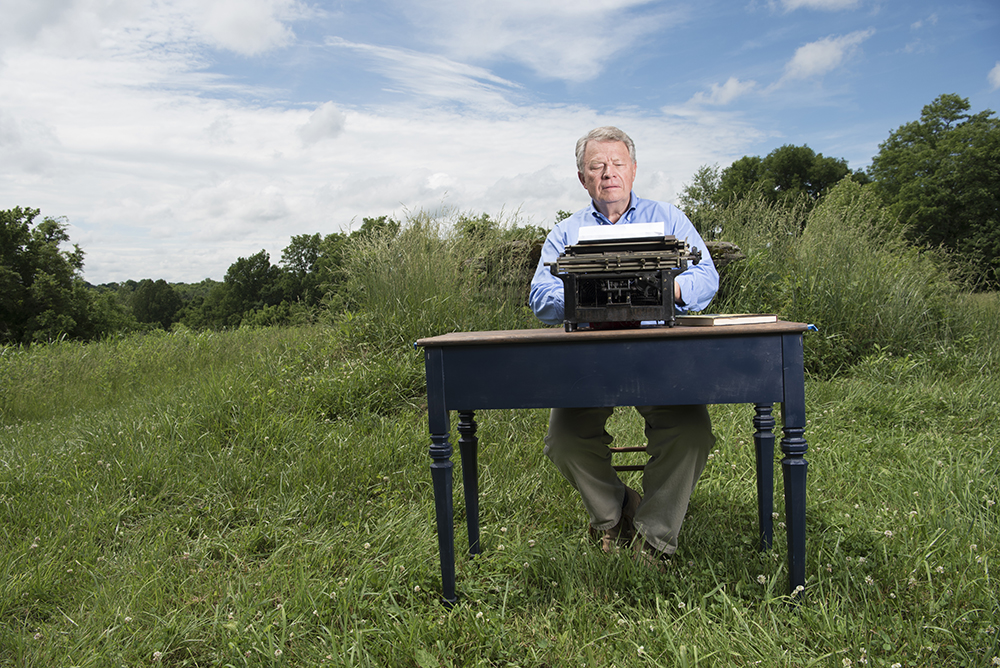 Byron Crawford’s Kentucky has closed out each issue of Kentucky Living since 2011—and we hope his column will do so for many years to come. We hear, time after time, how many of our readers love “the back page,” and we asked anyone who wanted to, to share some of their favorites with us and with you.

Having been a loyal fan of Byron Crawford’s daily column in the Courier-Journal back in the day, I contacted him by mail about an infamous character in our neighborhood. His name was Maxie McKinney of Pascal, Ky. In my pitch to connect with Byron, I told him, among other things, that Maxie was a professional pallbearer. This caught his attention and he called me late one afternoon trying to set up an interview with Maxie. I quickly got it done, and we all met at Maxie and Norma Ruth’s house in Pascal. Maxie told tales, Norma Ruth was a nervous wreck, Byron took an occasional note and smiled a lot, and my children and I provided the audience. Byron came back the next day, talked some more and took a picture of Maxie doing what he did best. Lounging in a hammock between two big sugar trees. A few days later Maxie’s story and picture were in Byron’s column. In this column, Byron revealed the unknown person who had been writing a weekly column for the Hart County Herald about the humorous antics of the neighbors. That person was me. The column went on until I moved to Danville in 1985.

Byron had written a book and my name and Maxie’s story were published once again. A bookstore on Centre College campus was having a book signing of Byron’s second book. He is a Stanford native and Danville liked to claim him too since they are so close. I looked up the first book and went to the book signing of his second book. I patiently waited in line with my old book and the new one I had just purchased. I opened book one to “my story,” and when my turn came I laid the open book in front of Byron Crawford. He glanced at it briefly, looked up and said, “How in the world are you Jerry Kaye?”

We chatted a while, and he is either fast on his feet or has an incredible memory. Several years had passed since our first meeting. I have laid eyes on him exactly twice. The mid-’80s were a long time ago but to this day I can call him or email him, both of which I have done, and he immediately remembers me. I don’t think I’m that memorable, so I have determined that Lincoln County’s Byron Crawford is a remarkable man with a remarkable gift. He knows people from all over Kentucky and the world, and I just know I’m not the only one he remembers. I am blessed with two signed books and a friendship that will last forever.

Byron Crawford, thanks for the memories.

More than 20 years ago Byron did a story on my 36 model GE refrigerator that went through the 37 flood in Louisville. This refrigerator is still doing great and staying cool.

Throughout his long and successful career as a journalist, Byron Crawford has blessed his readers with wonder.

The dictionary defines it as “A feeling of surprise, mingled with admiration caused by something beautiful, unexpected, unfamiliar or inexplicable.”

Byron reminds us that great stories might just be around the next curve, and in the most unexpected of places—likelunch at a truck stop, for example.

Although that’s where I first met him, it was many years earlier, as a high school and college student that I couldn’t wait to read his column in the Louisville Courier Journal—when he shared with us the wonder he encountered, tucked away off the beaten path.  More than three decades—and nearly a teaching career—later I finally met Byron in person at a truck stop restaurant to arrange a visit with a group of high school students. Knowing that I was a Madison County native, he said, “My grandmother was from here…strange name, but one you might’ve heard—Maupin.”

I laughed aloud, for it was a name I had grown up with—and my own mother’s middle name, though not blood related. Genealogy is a hobby of mine and knowing something of Maupin family history, for half an hour, we shared its stories and legends. We also made arrangements for a school visit the following spring.

Imagine my surprise, then, late the following winter when I attended a local estate auction at an old farmhouse owned by Maupin descendants. Among the items waiting to be sold was a rustic 200-year-old blanket chest, complete with hand-forged iron hinges. Tilting it to better light, I could see the traces of writing on its back—very old, stylishly painted lettering that bore the name of its one-time owner, Daniel C.  “King” Maupin—Byron’s own great-great-grandfather, who died in 1872.

As the auctioneer chanted two pieces of furniture away, a hurried cell phone call to Byron found him in a boat on Lake Cumberland, fishing. Both surprised and delighted to learn that such a family relic even existed, he was enthusiastic about buying it. Happily, minutes later I made the final bid and within a few weeks, after his school visit, Byron took it home with him to Shelbyville.

Interestingly, further research suggested that the old chest predated the birth of “King” Maupin. In fact, it is very possible that it was once the property of none other than Daniel C. Maupin’s father, “Tough Dan” Maupin, a soldier in Washington’s Army who later brought his family through the Cumberland Gap into Kentucky. He was married three times, fathered 21 children, and died on his own land near Berea in 1840.

It was quite a story, but it gets better.

Dead for more than a century before Byron was even born, Valley Forge survivor “Tough Dan” would never know his talented descendant who would one day be a successful television personality, journalist and author—and a highly sought after public speaker.

Who could guess that one of those speaking engagements would one day bring Tough Dan’s great-great-great-grandson to what is now the NAACO fork lift factory in Berea, for the company’s annual Christmas dinner? And who could have known that the land upon which that factory had been built—nay, the very soil upon which Byron stood to speak—had been “Tough Dan Maupin’s” pioneer homestead?

As Byron has shown us so well, so many times, you don’t have to go too far from home to find a good story. You just have to wonder.

And wonder might just be waiting around the next curve.

I remember an article he wrote about a poor Wellsville mountain boy named Will McCall. He started a diary when 8 years old in 1891 about his life and the mountain folk he knew. The diary was published and titled “I Thunk Me a Thaut.”

One of his entries: Got over mumps and go back to school. Thunk me a thaut. Id make reel purty pickchur of teacher and give hit to him. He slipped up behind me afore I got it purtifyd. Grabbed hit and tore hit up. Yanked me to frunt of room and switched me. Didnt stop till he got to coffin and couldnt go on. He whupped hate in my eyes but nary a peep outta my mouth.

Will went on to get his PhD and became a teacher/educator.

My all-time favorites Byron Crawford and the late Erma Bombeck. Somewhere I have laid up four of Byron’s pieces.

No. 1 – The piece about his stick horse who truly had a mind of his own. No way would he avoid a mudhole.

No. 2 – There was talk of drafting women and Byron volunteered his wife: “Take the one in the red housecoat, she’s mine” or something like that.

No. 3 – The second piece about his stick horse.

No. 4 – The baby bed still in the attic. We have an identical one in our attic purchased 65 years ago.