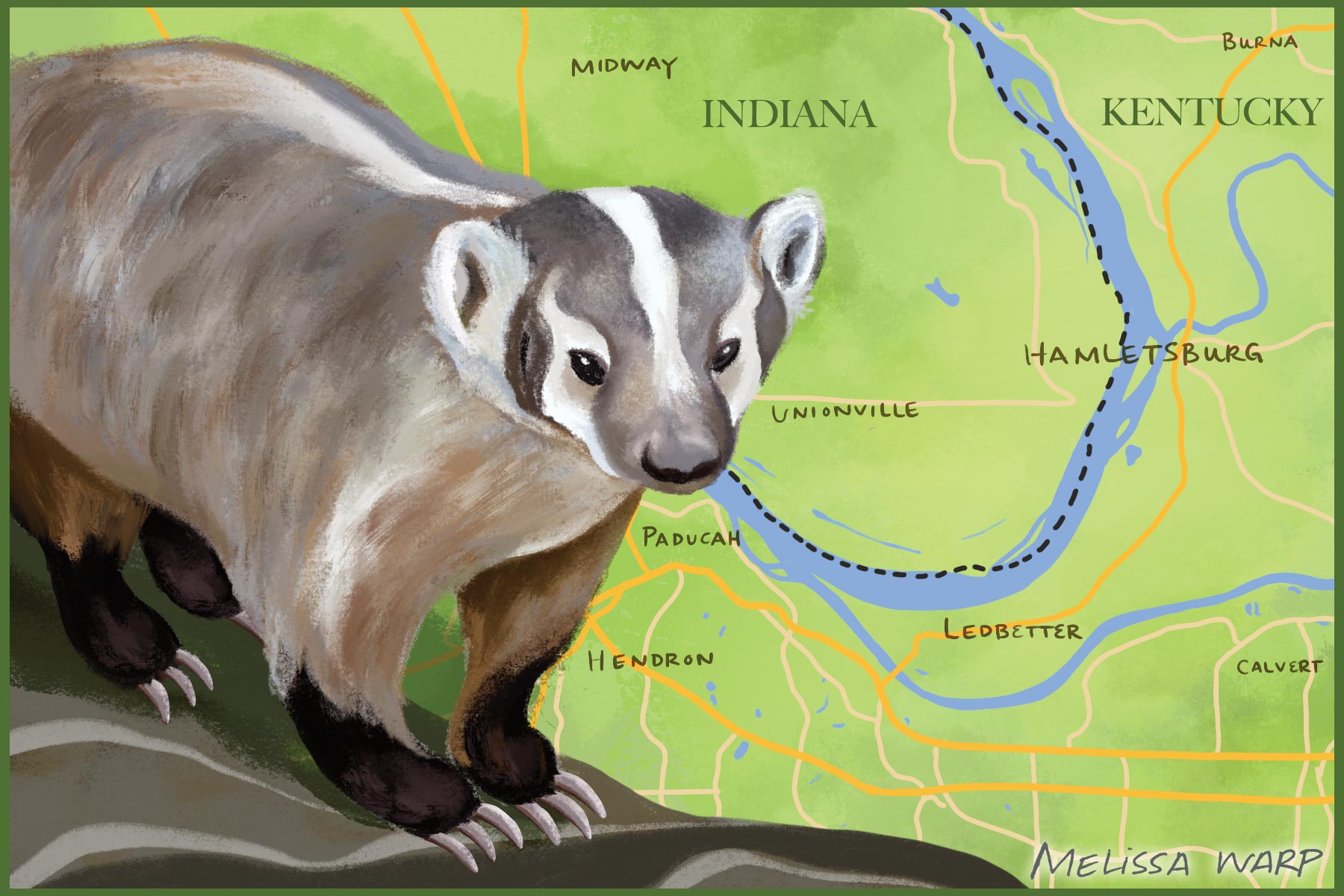 They’re here, even if you do not see them

A FRIEND SHOWED ME a puzzling night photo of an animal caught on one of his trail cameras near Salt River in central Kentucky a few months ago.

I half-jokingly said it looked a little like a badger.

Such a sighting might be rare, but not impossible. Scattered reports of badgers in Kentucky have been occurring since the late 1970s when a badger was caught in a trap a few miles from the Ohio River in Breckinridge County. Then, in the spring of 1979, hunting dogs came upon two badgers and treed one of them near the Ohio River east of Belleview in Boone County. Conservation officers confirmed the sightings in each instance.

About that same time, a badger was killed on the road near Reidland in McCracken County, a few miles east of Paducah. And a few months later, another was struck by a car in Bullitt County near the Bernheim Arboretum and Research Forest exit on Interstate 65. Again, both were confirmed by conservation officers. Within a few weeks, a Kentucky state trooper saw a badger crossing I-65 in the same area.

Badgers are apparently still here, says biologist Zach Couch of the Kentucky Department of Fish and Wildlife Resources, but there is no evidence of a sizeable population beyond an occasional sighting or road kill. Nearly all the reports have been in counties bordering Indiana, where badgers were known to be extending their range. Most recent sightings in Kentucky have been in the vicinity of Owensboro.

The badger isn’t the only elusive animal whose path you might one day cross in Kentucky. While larger game animals, snakes and bats, get most of the public attention, several species remain virtually out of sight. Flying squirrels are believed to inhabit most counties in Kentucky, but many of us may never see one since they are most active at night. With the help of bat-like webbing between their front and back legs they may glide 100 feet or more among the trees. Their dens are usually in hollow trees, but they have been known to nest in attics.

The armadillo, which has long been associated with the Southwestern states, has established a population in Kentucky and is now fairly common in western Kentucky and several southern border counties. Couch, a consumer-member of Blue Grass Energy, says armadillo roadkills have actually been confirmed as far north as Anderson and Jessamine counties.

Finally, porcupines appear to be finding their way into the state, although not in great numbers so far. While Couch says there have probably been fewer than five credible sightings in Kentucky, he has seen reports that West Virginia has a growing porcupine population that seems to be getting well-established.

And from the feathered kingdom, the common raven is now nesting in a few locations among the cliffs in southeastern Kentucky, primarily on Pine Mountain.

The increased use of trail cameras is providing Couch and other biologists with more sightings of several secretive wildlife species. If you have pictures, Couch’s email address is zach.couch@ky.gov.