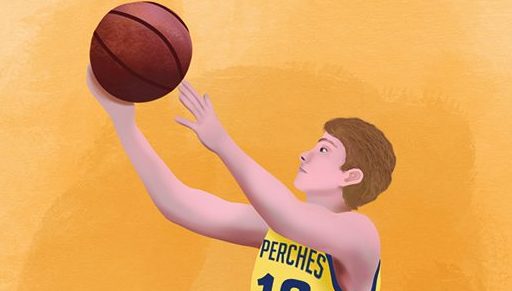 A friend asked a while back if I’d ever been to the small community of Sunfish in Edmonson County, and if I knew the nickname of their basketball team back when Sunfish still had a high school.

They were the “Perches,” he said.

Sunfish High, which closed in 1959, is among the many small high schools with great team nicknames that existed in the years before school consolidation—when hundreds of communities had their own high schools and nearly all had a basketball team.

The Kentucky High School Athletic Association has only scant information on that era, but researcher Jeff Bridgeman has compiled a 768-page Kentucky High School Basketball Encyclopedia, 100th Anniversary Edition (Acclaim Press, $49.95) that’s a virtual gold mine of Kentucky high school hardwood history from the early days to the present, including team nicknames.

A few good nicknames, like the Somerset Briar Jumpers and Bracken County Polar Bears, are still in use. But gone are the Locust “Squirrels” from Carroll County, the Great Crossing “Apes” from Scott, the Lincoln “Tarzans” in Middlesboro, Harrodsburg’s West Side “Scalpers,” Floyd County’s Wayland “Wasps,” and Henry’s Smithfield “Peacocks.”

Bridgeman, whose father played for Monticello during the 1930s, works as a computer specialist, but spent 11 years in his spare time assembling records of many all-but-forgotten high school teams, such as Hardin County’s Cecilia “Mules”—who only lasted one season in 1931-32, Henry County’s Franklinton “Diplomats,” the Edward B. Davis “Mud Turtles” of Scott County, the Flat Creek “Lumberjacks” of Clay, Friendship “Quakers” of Caldwell, Marion’s “Blue Terrors” from Crittenden, the Fulton “Pilots” from Hickman County and the Hamilton “Farmers” of Boone.

Any number of small high schools in those days had no gyms and practiced on dirt or asphalt courts.

“The state champion in 1929 was Heath down by Paducah, and they didn’t have an indoor court until 1937,” Bridgeman recalls.

So it was not unusual for teams such as Laurel’s Hazel Green “Bullfrogs,” Pike’s Hellier “Hellcats,” Hart’s Horse Cave “Cave Men,” Webster’s Onton “Aeroplanes,” or the Parmleysville “Flying Feet” from Wayne County to learn their dribbles and drives the hard way.

Girls’ teams usually took the same nicknames as the boys back then, with occasional modifications such as the Horse Cave “Cavegirls.”

Bridgeman found a picture of a girls team from Murray High School in 1910 in which the players were wearing long white dresses.

“I thought, ‘this must be a formal picture.’ But come to find out that’s what they played in. Because, in the same year, UK had a girls basketball team, and they were wearing the same outfits, and they had a picture of them playing on the court…then all of a sudden I guess they decided to go with the bloomers.”

My how uniforms and team nicknames have changed!

But somewhere out there, I’m guessing there may still be a Nicholasville “Tarantula,” Mayking “Red Fox,” Van Lear “Bank Mule,” Morganfield “Guerilla” or Worthville “Hoot Owl” with enough great stories to take us into double overtime.