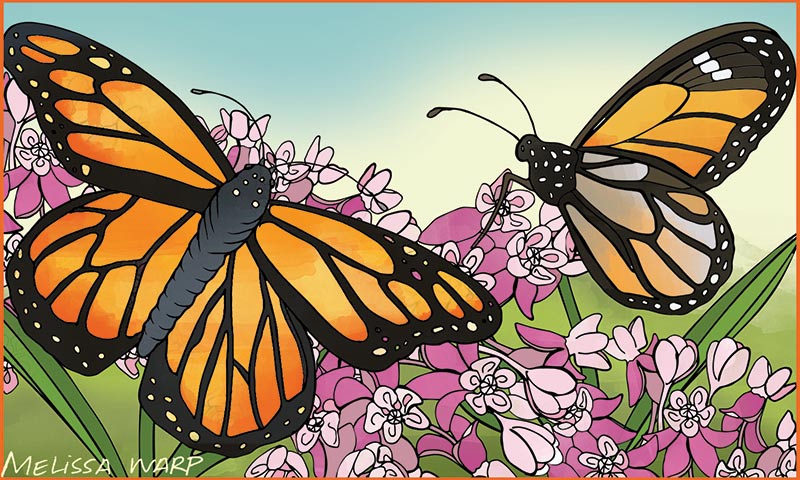 On the soft, dying breath of summer, about this time each year, there flutters past me a monarch butterfly wearing wings of autumn orange interlaced with dark bands—as pretty as a maple leaf in late October, or an exquisite sliver of stained glass come to life.

Some days I may notice several that appear to be drowsily on their way to nowhere, but in fact are on a general southwesterly heading to a very special place, far away, that they have never seen.

If they make it, they will join millions of others to overwinter in a remote pine and fir forest high in the Sierra Madres of central Mexico. Often, there are tens of thousands covering a single tree.

The fall migration of monarchs through Kentucky invites us all on nature’s fascinating flight of fancy.

Some years ago, when I noticed monarchs clinging to milkweed blossoms on my little remnant of farmland along Salt River, I decided to mow around the patch of milkweeds and leave it for the butterflies.

To my surprise, many others have had the same idea on a much grander scale.

Sunni Carr, a biologist with the Kentucky Department of Fish & Wildlife Resources, chairs a steering committee representing many individuals, organizations, and
agencies—from garden clubs to school groups—that are dedicated to providing suitable habitat for monarch stopover sites during their migrations.

Milkweeds on the Kentucky landscape are critically important in the life cycle of the monarch, which both lays eggs and feeds on milkweed. It is an especially important food source for the monarchs we see this time of year, which are likely part of the “fifth generation” making the long flight to overwinter in Mexico before coming out of the forest months later to lay eggs and start the life cycle again.

“So no monarch that goes to Mexico ever traverses up through North America and then back down,” says Carr. “What we’ve learned is that the biggest limiting factor when they’re up in North America is, we need to make sure that those food plants are there that they need to complete their life cycle—flowering plants, even flowering trees and shrubs, are extremely important. And they have to have the milkweed.”

Swamp milkweed is a monarch favorite, but there are dozens of other suitable types available from a number of nurseries.

A storm in Mexico last year is believed to have depleted the monarch population by about 50 percent, and the U.S. Fish and Wildlife Service has been petitioned to declare the monarch a threatened species.

We can help restore the population by leaving some milkweeds and other flowering plants when we mow, or by joining the effort to plant waystations for monarchs.