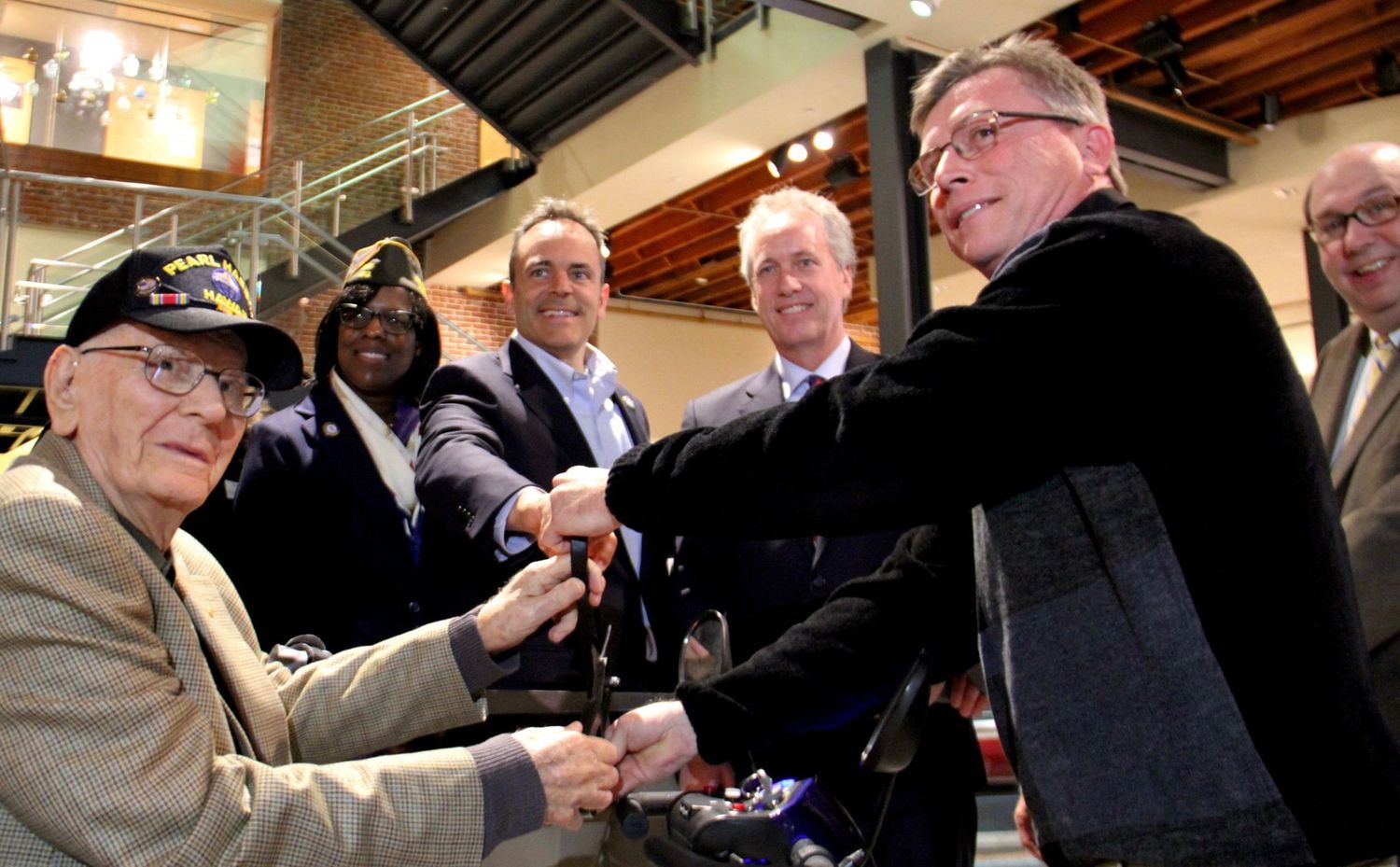 It’s a perspective few Americans share, and even fewer can clearly articulate. 92-year-old Private Charles Hocker witnessed Japanese planes attacking Pearl Harbor from his Schofield Barracks in O’ahu, Hawaii, on December 7, 1941. Mr. Hocker’s battle wounds are still visible, having taken lead in his leg when three planes opened fire on the barracks, but they are not nearly as clear as his memory of that fateful morning. This year, on the 75th anniversary of the attack, Hocker will return to Pearl Harbor for the first time since his World War II service ended 72 years ago.

Hocker’s story and many others like it are featured in a new exhibit currently on display at the Frazier History Museum in Louisville, Kentucky. A Morning that Changed the World: Personal Stories of Pearl Harbor is an immersive, thought-provoking exhibition that delves into the horror and chaos of the attack with stories told by people who experienced this moment in history.

Hocker’s opportunity to return to the island came after a Veterans Day commemoration event at the museum attended by U.S. Representative John Yarmuth, Kentucky Governor Matt Bevin, Louisville Mayor Greg Fischer, and countless military personnel and organizations who were guests of the Frazier for the remembrance. Hocker learned just a few days later that he was invited to return to Pearl Harbor by the Honor Flight, Bluegrass Chapter.

A Morning that Changed the World: Personal Stories of Pearl Harbor features the Rex Knight Collection of letters, photographs, and mementos from both servicemen and civilians. Visitors of the exhibition are left with a heightened feeling of connection to the individuals that experienced the seemingly endless two hours of the day that President FDR correctly proclaimed “would live in infamy.” The result was not only vulnerability and fear, but also anger, nationalism, and patriotism. The world was forever changed.

As visitors step into the exhibit, they are transported to December 6, 1941—the evening before the attack. With the sounds of glasses clinking and music playing, the innocent and joyous atmosphere of a party in the Officer’s Club on the island sets the stage for what life was like before the profound and unforeseen events about to unfurl. On that clear and beautiful evening, Lt. General Walter Short looked out onto the lights of all of the ships in Pearl Harbor and noted, “What a target that would make!”

Visitors walk through the rumbling hallway of a battleship, transporting them through to that fateful morning, where in the next room they find themselves standing under a Japanese fighter plane. With objects, mementos, letters, visuals, and sound, the attack and the immediate aftermath come to life through the stories of the servicemen and civilians that experienced the Sunday morning attack.

One such story is that of Dorie Miller, a mess man in the still racially segregated U.S. Navy. On December 7, 1941, Miller went above and beyond the call of duty for his fellow servicemen and his country, moving his injured captain to safety; as the ship sank, he defended his battleship by manning a .50 caliber machine gun on which he had never been trained. Miller became the first African-American to receive the Navy Cross, presented for courage under fire.

Another story comes from a college football team playing a series of games in Hawaii, leading to the heroism of 23 young men from Willamette University in Salem, Oregon—civilians before the attack and servicemen after. Watching with confusion as bombs exploded near their hotel, the young men were called into action immediately following the attack on Pearl Harbor. The entire football team was enlisted by the Army to help defend the island, given rifles with bayonets as they dug trenches on the beach, assisted injured children at the Army hospital, and protected the vital water towers and storage tanks. After returning home to Oregon, almost the entire team enlisted in the Army.

As the exhibit continues to unfold, heavily censored letters and political propaganda lead visitors through the aftermath of the attack, onward through the gates of a Japanese internment camp, to a generation forever changed. “History doesn’t repeat itself, but it rhymes.”—Mark Twain. As present day emerges, marked by a memorial wall, the exhibit explores the parallels between Pearl Harbor and the events of September 11, 2001, the next foreign attack on American soil.

With the 75th anniversary upon us, Personal Stories of Pearl Harbor aims to give visitors a better understanding of our past so that, in these troubled times, we can renew a sense of who we are, what we stand for, and where we are headed.