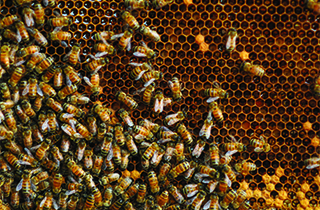 Most people instinctively avoid bees. Nobody wants a painful sting, so typically the first buzz sends people running for cover.

But Kent Williams of Graves County would like to see a lot more of them.

Williams, president of the Lake Barkley Beekeepers Association and a member of West Kentucky RECC, dons a protective beekeeping suit with a veil as he apprehensively inspects his 600-hive apiary (the area where bees are kept), which produces approximately 15,000 pounds of honey each year.

Williams’ uneasiness does not stem from a fear of bee stings, but from a fear of discovering that his honeybees have flown the coop—or more accurately, the hive.

Like beekeepers around the country, Williams is struggling to cope with a mysterious illness infecting his hives known as colony collapse disorder (CCD), which first surfaced around 2005. It’s a phenomenon where hives that should have thousands of active bees are abandoned and left with only the queen and a few worker bees, if any; however, there are no dead bees. The colony breaks down because the majority of the worker bees have abandoned the hive and it cannot be sustained.

Experts have presented many theories about the cause of these large-scale colony die-offs: viruses, nosema (an intestinal disease), and the pesticide-resistant varroa mite. Many apiculturists, including Williams, are scrutinizing the increased use of a class of pesticides known as neonicotinoids. There’s research that demonstrates these pesticides affect the bees’ ability to home in on the hive, which is sort of an induced dementia.

Williams says he knows many beekeepers “on the cutting edge of research” that are actively searching for answers and solutions to CCD.

“They have come to the conclusion that neonicotinoids play a significant role in the colony loss issue,” Williams says, but he adds that his personal belief is that, “While the chemicals play a very significant role, the addition of a secondary agent, such as viral, bacterial, fungal, or microsporidian infestation, is required to reach epidemic or plague status.”

Kentucky State Apiarist Sean Burgess, with the Kentucky Department of Agriculture, has a similar view. Part of Burgess’ job is to respond to calls from beekeepers that are having problems with their hives. He says not every hive affliction can be labeled CCD.

“It is my opinion that bees are under pressure from a lot of different areas: habitat loss, pesticides, fungicides, invasive pests, and diseases,” says Burgess.

But when he encounters colony collapse disorder, he doesn’t rule out neonicotinoids as a contributing factor.

“The common thinking these days is that CCD is caused by systemic pesticides (meaning they persist throughout the life of the plant) that attack the central nervous system of harmful insects. Unfortunately, they can’t tell the difference between a harmful insect and a beneficial one, like the honeybee.”

The pesticide industry disputes claims that neonicotinoids are unsafe, but what nobody disputes is that bees are dying at an alarming rate. So far, researchers have been unable to pinpoint a single cause.

A decade ago, losing 5, 10, or even 15 percent of bees was the norm for beekeepers, but since the onset of CCD, hobbyists often lose 50 percent of their bees in a season. Williams says his losses can be considerably more than 50 percent, wiping out profits from his honey harvest—and that stings.

Fortunately for Williams, honey is not his only source of income from his hives. A large part of his business is raising queen bees for beekeepers in neighboring states. He estimates he ships up to 3,000 queen bees per year.

So just how does one ship a tiny insect hundreds of miles and ensure her survival?

They can travel by the United States Postal Service, generally for up to 500 miles, or by overnight, next-day air shippers if more than 500 miles. Yes, they do ship live bees when properly packaged. The queen travels in royal style. She is placed in a cage with hard candy and several attendants, female worker bees who take care of her.

There can be no hive without a healthy queen, so they are in high demand. She’s the only fertile female in the colony and is the mother of all the other bees. The female worker bees’ role is to nurture and defend her. The male drones lack stingers, so they cannot protect the hive. Their only function is to mate with the queen.

Pollinating our world
Think about your local farmers’ market piled high with seasonal produce. Maybe you buy plump, delicious blueberries during the summer and pumpkins in the fall. Without bees, there would be no blueberries, nor pumpkins.

As most of us learned in middle school, honeybees pollinate flowers and that includes the blooms on many fruits and vegetables that would never bear fruit without bees to transfer pollen from the male part of the flower (stamen) to the female part (stigma). A decline in honeybees is a threat to many delicious fruits and vegetables Americans take for granted.

Many traditional Kentucky agricultural products, such as corn, soybeans, and wheat, are not pollination-dependent, but melons, squash, and cucumbers are—to name just a few.

Williams says it’s important to look at both sides of the food issue. While he certainly would like to see a resurgence of the bee population, he emphasizes that the public should not demonize modern agricultural practices that include the use of pesticides without understanding the possible consequences.

“The bottom line is that mankind can survive and maintain the world population without honeybees, albeit with a change in diet reflecting a major drop in production of some vegetable varieties and an increase in wind-pollinated food sources,” says Williams, “but it is uncertain if the current world population could remain static without modern agricultural practices.”

Despite all the negative buzz about bees, there’s also some good news. Thanks to the recent media attention focused on the demise of the honeybee, there are more Kentuckians than ever doing their part to help the beneficent insects thrive. By Burgess’ estimate, there are now approximately 4,000-5,000 beekeepers managing around 20,000-25,000 colonies of bees in Kentucky. That’s a big increase from just five years ago.

“This signals to me that people are waking up to the value of our pollinators and the importance of being good stewards to the natural world.”

Bees bee-hoove the gardener
Want bees to make a beeline to your vegetable or flower garden? Make them welcome by planting what they love: clover, sage, oregano, lavender, buttercup, goldenrod, and alfalfa.

You want to invite them for an extended stay, so have a variety of plants and herbs that will bloom from spring through fall, and remember that bees are attracted to bright, beautiful colors,
primarily yellow.

Not all honeybees live in hives, so you may be able to provide the home they are looking for. But know that some gardening practices designed to keep lawns well-manicured and attractive also negatively impact bees. For instance, some bees nest in the ground, so too much mulch and lawn fabric will discourage them from living in your yard.

Obsessive weeding will send the bees away in a hurry. You may not think weeds are pretty, but bees love them, so leave a small patch of wild growth.

Obviously, pesticide use should be limited, but if you choose to use them, choose liquid sprays, not dust, and spray after dark when the pollinators are not as active.

Beekeeping for beginners or masters
For information on cultivating happy, healthy hives and a host of beekeeping links, visit the Kentucky State Beekeepers Association Web site at www.ksbabeekeeping.org, where you will also find a list of nearly 50 local beekeeping organizations. For more about KSBA, you can also contact President Tammy Horn at (859) 200-2207.

Bee culture conference in Richmond
Hear from some of the world’s foremost honeybee experts, along with hands-on training, vendors, and more, at the 2014 Eastern Apiculture Society of North America (EAS) annual conference at Eastern Kentucky University in Richmond, July 28-August 1. (Registration available online May 2014.) Go to 2014 Eastern Apiculture for more information.

Top supplier of bees, supplies, and equipment—classes too
The Walter T. Kelley Company in Clarkson is no “newBEE” to the business of bees, but they are a valuable resource to those who are. This 90-year-old company is the largest beekeeping supply manufacturer in Kentucky and one of the largest in the U.S.

With the bee population on the decline, Kelley does all it can to help keep these vital pollinators alive and thriving. That often means easing the uninitiated into the world of beekeeping by setting them up with hives, protective clothing, and virtually anything else needed to start a productive, healthy apiary.

A good foundation for the hive is one of the keys to success, and Kelley is one of only two companies in the country that make their own wax foundations. This crucial component gives the bees a head start on honeycomb and egg production.

Kelley prides itself on educating beekeepers, whether they are novice hobbyists or experienced commercial operators, by providing beekeeping classes and offering advice to those struggling with the myriad of issues that often plague beekeepers.

In the spring, the company is a beehive of activity. Most Saturdays in April and May, the facility buzzes with approximately 1 million bees awaiting shipment or customer pick-up.