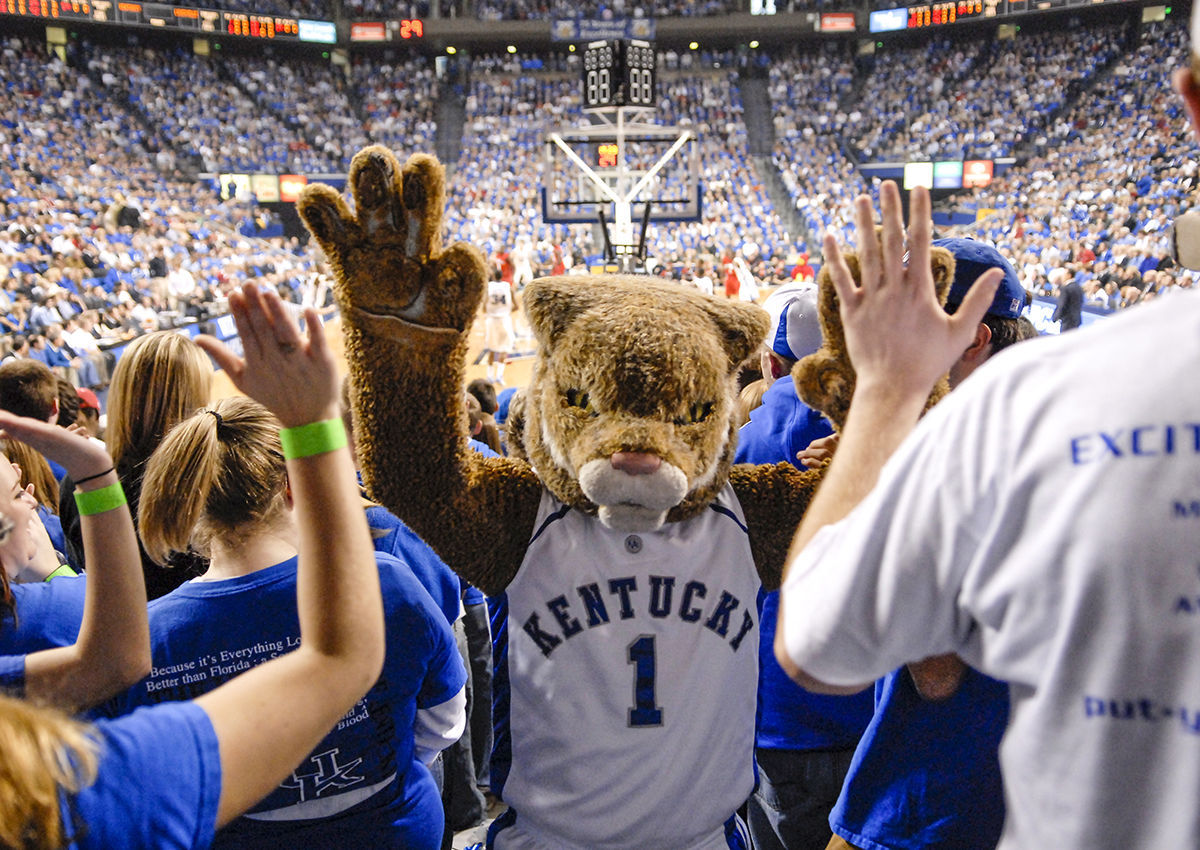 The University of Kentucky’s Wildcat makes his way through the eRUPPtion Zone in Rupp Arena. Photo: Tim Webb

[soliloquy id=”14510″]
Confining costumes don’t keep Kentucky’s college mascots from spreading school spirit
With their supersized capes, beaks, or paws, college mascots are larger than life. But how much do you really know about your favorite school’s costumed character? Find out as we unmask the mascot.

“The crowd loves Victor because he is so involved and has a great personality,” says cheerleader Desiree Allen.

And cheerleading co-captain Zana Harman smiles when Victor interacts with children. “Just seeing how happy the kids are to see Victor is really exciting,” she adds.

To align the mascot with the university’s recent logo change, Victor is kicking off this season in a new suit, bringing slight changes to his helmet and hair. “He’ll look basically the same, but he’ll have a little bit different flair,” explains Brandon Hays, assistant athletic director for marketing, promotions, and tickets.

Following a selection process, which included performing skits and showing off their best dance moves, two freshmen were chosen earlier this year to portray Victor. While their true identities won’t be revealed until their eventual Senior Day, Hays divulges that he dons the Viking mascot suit on occasion.

“It’s hot in that thing, but it’s worth it all when you get to be goofy and make people happy,” he says. “Best of all, no one knows it’s me.”

In the 1960s, then-president Robert Martin sought a mascot to appear at athletic events. “Dr. Martin wanted to tie it to the Honorable Order of Kentucky Colonels,” says Britton. “He thought that would be a suitable name for our mascot.”

With his big white hat and matching beard, the Colonel is easily recognizable at events. And this fun-loving mascot provides plenty of opportunities for fan interaction.

“Having a mascot at events always adds an element that sets it apart from the norm,” says Director of Athletic Marketing Rachel Park, adding that the Colonel represents a community that stands up for things that matter. “That is the EKU spirit, and it is present at all events at EKU.”

Whether on the basketball court or football field, Beaker enjoys posing for photos with fans and acting goofy on the sidelines. And of course, he’s always up for showing off his smooth chicken dance moves.

College mascot camp helped prepare Mauney to become Beaker. There, he learned to fully express himself with bigger movements and to speak only when necessary, like asking for a drink of water.

While other students share MSU’s Beaker role, Mauney faces some unique challenges. “I’m actually autistic,” he explains. “And I have a very rare skin disorder called hemihypoplasia.” It’s so rare, in fact, that Mauney is the first person in the United States to receive this diagnosis, and only the second in the world.

Before life as Somerset High School’s mascot, Mauney was shy, hardly talking to others. Now he’s proving that people with special needs can do anything. “Under the suit, people don’t see my scars or anything,” he says. “With this mask on my head, I feel like a totally different person.”

Since 1979, Big Red has been the face of Western. In recent years, fans may have noticed the mascot’s slimmer physique. While some believe Big Red is more health-conscious these days, Davids says, “Big Red is still as huggable and loveable as always.”

When it comes to the suit, Big Red’s four-fingered, massive hands make grasping items challenging. But unlike mascots with immobile faces, Big Red’s moveable mouth enables it to express a broader range of emotions and better interact with the crowd, according to former Western cheerleader and current All-Girl Cheerleading Coach Joshua Bewley.

WKU’s world-traveling mascot has visited 29 states and Washington, D.C., as well as Canada and Italy. Wherever Big Red goes, its fun antics continually surprise fans. Davids says people never know what to expect next. “I think that’s why Big Red’s so entertaining.”

It was Burns who first realized how beneficial it would be to have a mascot as visible in the Columbia area as WKU’s mascot Big Red is in Bowling Green. Burns worked with others in marketing and athletics, as well as students, to bring Blue Raider Bob to life in 2014.

While the identity of students portraying Bob is disguised, depicting the mascot requires a certain temperament, personality, and attitude. There is one limitation, however. The suit allows for only a 4-inch leeway in height, so a student can’t be too short or too tall.

Burns says he’s amazed by the acrobatics of these costumed student athletes, no matter the college. He adds, “It’s a great combination between pantomime acting and athletics.”

So what’s it really like inside the suit? With a steamy 40- to 50-degree temperature increase, Boggess says, “It’s very, very hot. We do smell by the end of our games because we lose at least 10 pounds of water weight during a regular football game.”

Because visibility is limited, Boggess compensates by forming a “visual room” inside his head. And muscle memory helps when navigating the stairs at Memorial Coliseum, which are less steep than those at Rupp Arena.

“Most mascot programs nowadays don’t have just one person in the suit,” Boggess explains. He and Tyler Barton, who shares the mascot role, both work to ensure that Wildcat fans see continuity from one event to another as well as with Wildcats of the past.

Whether Wildcat is doing pushups after a touchdown or leading the fans in spelling out C-A-T-S, Head Cheer Coach Jomo Thompson says, “Wildcat is our No. 1 cheerleader. The guys in the suit make the character come to life.”

Only students are considered for portraying the U of L mascot. An obvious requirement is fitting inside the cardinal costume. “The suit is built for a taller person,” Associate Sports Information Director Nancy Worley explains. “Current birds are all over 6 foot, but height is not a disqualifier.”

Availability is another factor. Louie is so popular, he’s often spotted at nonsporting events all over the city. “The biggest demand is for charity—walks, runs, galas—birthday parties, anniversaries, and weddings,” says Worley. For such appearances, Louie often trades his selection of sports jerseys for a fancy tuxedo.

Students who wear the suit are eligible for partial scholarships, but perhaps even more meaningful, they step into history as part of U of L’s athletics tradition.

Spirited videos
College mascots spread their good will on and off the field, check out a few of their videos: