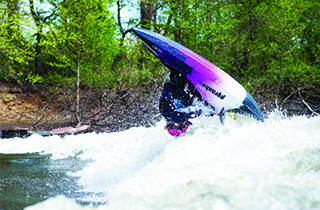 On any given day, it is hard to find Haley Mills, a self-described “nomad” and “seeker of water” who has hopscotched the world for the past seven years. But wherever she is geographically, the Elizabethtown native is probably on the water.

Mills is a professional kayaker and stand-up paddle boarder, one of a small but growing cadre of young people traversing the world in search of fast-moving water and waves, adrenaline and adventure. She is currently on a full tour of the U.S., competing and training on the water.

Even within this elite group, Mills stands out. She is ranked fifth in the world in freestyle kayaking. In addition, she is the only woman in the world who consistently competes in three water sports: freestyle kayaking (doing tricks on a stationary river wave); down river, stand-up paddle boarding (racing while standing on what looks like a surf board); and river surfing (maneuvering shorter boards on class 3 rivers).

“Most women choose one type of event,” Mills says, “but I like to do everything with kayaking and paddle boarding, for the love of it.”

Whitewater kayaking was love at first sight for Mills. She was 13 years old when she first tried the sport.

“The first time I kayaked was at a day camp in Bernheim Forest (in Clermont, Kentucky),” Mills recalls. “I then took my first class at the Nantahala Outdoor Center in Bryson City, North Carolina. I thought the guide would cancel because the river was at flood level. It looked like chocolate milk. But we went out on the river and practiced technique. It was a really cool experience.”

The teenager kept talking about the experience and wanting to kayak again. Soon Mills became a member of the Viking Canoe Club in Louisville. She began making weekend trips to middle Tennessee to kayak. With her familiarity of the area, Mills chose Middle Tennessee State University when she graduated from Elizabethtown’s Central Hardin High School in 2003.

Surprises were just around the corner, however. After college graduation in 2008, she moved to Colorado, waitressing in the evening so she could perfect new kayaking tricks during the day. It was a long way from home and her parents, Eugenia and John Mills of Elizabethtown, members of Nolin Rural Electric Cooperative Corporation that serves her dad’s business, John Mills Ornamental Iron Shop.

“My parents thought I would get a job and follow the American dream of settling down and buying a house and kayak just for fun,” she recalls, “but they have always encouraged me to follow what I love.”

Living the dream
“Nomad is a great description of me,” Mills writes on her blog. “I enjoy the unpredictable life of traveling constantly while being on and around the water.”

In Colorado, Mills discovered freestyle kayaking events and the circuit—a series of kayaking competitions that offer cash prizes. And her timing was perfect. The sport’s popularity was soaring as Mills’ talent was doing likewise.

Freestyle kayaking (going down the river playboating doing tricks on a rapid) and creeking (which involves descending steep, low-volume whitewater, typically on a creek) first became popular in the 1980s and then gained even more favor in the 1990s as competitions, initially called rodeos, were organized. The sport’s popularity boomed this century, thanks in large part to better boat designs and new manufacturing processes that make competition kayaks more maneuverable and new tricks possible.

Tricks are the highlights of the competitions, which are held all over the world. That keeps Mills and her fellow competitors on the move.

“Home is now wherever my truck is parked,” she says. Mills lives in her truck, camping out and visiting friends.

Mills’ truck has a topper that contains a single bed and an assortment of kayaks and paddle boards. The back seat of the truck is her closet. “I am still a girl,” she jokes, “and I do have a lot of clothes. They are just all folded inside a duffle bag.”

A small grill and a cooler serve as a kitchen. There is little privacy, but Mills sees even that as a positive since it enables her to meet more people.

The loss of creature comforts pales in comparison to all Mills has accomplished.

Mills has made the U.S. Competition Team for the past four years, and placed fifth in the 2011 World Championships in Germany. In 2013, she won the U.S. Freestyle Kayaking Team Trials.

She has placed first in numerous events (see “Paddling with Haley” below). In 2013 Mills won first place in the Women’s division on the U.S. Freestyle Kayaking Team, and went on to compete in the 2013 Freestyle Kayaking World Championships.

Breakout year
“I am improving,” she says. “I spend a lot of time training and am dedicated to a diet that will propel me forward. I am getting more sponsors and more financial backing from sponsors.

“I want to try more crazy stuff on the river. I want to paddle rivers no one else has paddled. I want to do more expedition kayaking. I want to make a trip around the world.”

Mills believes this will be “another breakout year.”

This year in particular Mills will compete in the circuit, which includes events on the U.S. east coast followed by competitions in Colorado, Idaho, and California. Afterward, Mills has a trip planned with friends to Norway, Austria, and the Czech Republic. Then her next stop? To Nepal until about Christmas. There is no plan after that.

For now Mills wants to be like one of the few possessions she takes with her—an air plant her sister gave her. The plant thrives without roots, requiring only air. Mills doesn’t want anything to hold her down as she catches her air doing tricks on a fast-moving river.

Freestyle tricks
Although she competes in several events, Haley Mills is best known for freestyle kayaking where competitors have 45 to 60 seconds to do as many tricks as they can. The tricks have colorful names such as The McNasty, the Roundhouse, Phonics Monkey, the Donkey Flip, Split Wheels, and Space Godzilla.

Mills’ signature trick is The Huge Clean Air Loop, in which she does a forward aerial somersault. The kayak is completely vertical just moments before Mills lands it upright on the river with her bow facing upstream.

There are some 30 kayaking tricks in each of five categories, according to the Triktionary, which touts itself as “the world’s first comprehensive online freestyle dictionary.” (To learn more go to www.triktionary.wordpress.com. The Web site explains the terminology and how winners are determined.)

Keep up with Haley on her journeys around the world—go online to www.Haleyemills.blogspot.com. She writes about a Bulungi month in Uganda (world-class rivers and incredible people who know how to live a blessed and simple life); training at the Nantahala Outdoor Center; and learning life lessons as she drives cross-country alone.

Check out what Mills eats that gives her fuel to compete and a glimpse at the awards she’s won the past three years when you click Paddling with Haley.