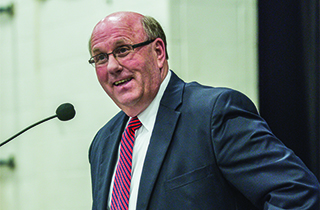 If you made up a story about a guy to represent electric co-ops in Kentucky, you’d make up Bill Corum.

He grew up in Brandenburg, not far from the boyhood farmstead of J.K. Smith, the co-op legend who founded and headed the Kentucky Association of Electric Cooperatives in 1948, and then founded and headed a national financial organization for electric co-ops.

He married his high-school sweetheart, Pam. They live next to her mother, whose house has a historical marker in front, noting its use as the headquarters for Morgan’s Raiders in the Civil War.

Around Brandenburg you see his name as city council member on the old wastewater treatment plant. And on a more recent sign at the entrance to the Bill Corum Industrial Park.

Last month he retired as president and CEO of the Kentucky Association of Electric Cooperatives, 43 years after his first day at the Meade County co-op.

To really understand Bill’s story, you need to know a bit about co-ops.

A co-op is a business like any other, except the owners are the users of the product or service. In the case of electric co-ops, that means the people who buy the electricity own the utility. Co-ops around the world follow a long-established set of seven principles that include democratic control, open membership, and concern for the community.

Concern for the community has defined Bill’s career since his first job at Meade County Rural Electric Co-op in 1965. Whether it’s the community of Brandenburg, or the state and national community of electric co-ops, he has brought a serious, head-on approach to solving tough business problems. And yet somehow he tackles those tough issues with a sunny, respectful friendliness that makes you want to spend time with him.

In his career with Meade County Rural Electric Co-op, he kept moving up through a variety of jobs, heading areas from operations to customer service. He chaired state and national electric co-op customer service professional groups.

In 2001, I drove to Brandenburg to interview Bill for his retirement after 30 years with Meade County Rural Electric Co-op. I wrote a profile that quoted him saying, “I’m certainly not retiring. I’m too active for that. You haven’t seen the last of me.”

True to his word, he answered a recruitment call to return to co-ops in 2002, overseeing the transformer manufacturing operation at the Kentucky Association of Electric Co-ops in Louisville.

In the 1950s, the growing electric co-op industry often found itself taken advantage of by larger businesses, including electric transformer vendors. So KAEC set up its own assembly line. Over the decades, as worldwide economies changed, manufacturing and marketing operations needed to be updated to stay competitive.

Bill rolled up his sleeves and entered that world, managing change that ranged from modernizing facilities to monitoring world commodity prices of copper and aluminum.

In 2010, the KAEC board hired Bill to head the association. For the next four years he directed state and federal legislative contact, as well as being the chief spokesman and coordinator for the 26 local, not-for-profit co-ops that provide electricity for 2 million Kentuckians. He made a priority of elevating electric safety to an everyday, top-of-the-mind concern for co-ops across the state. He believed strongly in Kentucky Living magazine as a way to keep co-op members in touch with their co-ops, and knowledgeable about their responsibilities as co-op owners.

When Bill told his wife he would retire in January of this year, Pam wouldn’t allow it—until he visited all the co-op annual meetings one last time. Through the summer, Kentucky’s electric co-ops hold their local membership meetings, offering members a mix of business reports, entertainment, and socializing. At many of those, Bill is asked to give a 5-minute report from the statewide perspective.

So what was his message on this farewell tour?

He congratulated and thanked the members of these local co-ops for their participation in a unique business enterprise that helps improve the quality of life for everyone in their community.

If you made up a concluding speech for Bill Corum’s career, of course it would be about cooperation and community at a co-op annual meeting.