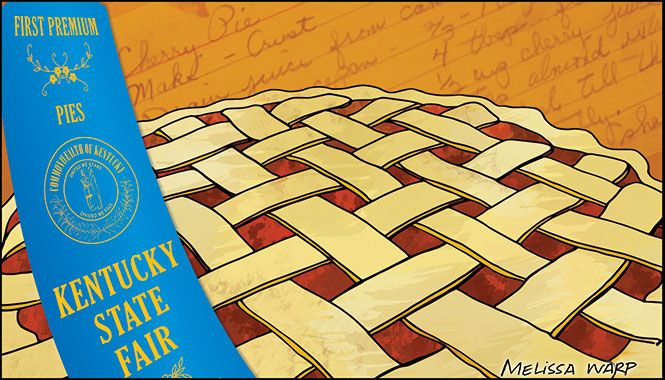 Musical genius George Gershwin gave us Rhapsody in Blue, but Jeanne Kemper is composing her own version of that classic in culinary competition at the Kentucky State Fair.

Over the past three decades, she has won enough blue ribbons with her kitchen creations to have perhaps tempted even Gershwin to put down his music and go for dessert.

This year she is preparing 52 entries in the candy division. Yes, you read it correctly. Fifty-two.

She and her husband, Leonard, retired longtime Shelby County dairy and tobacco farmers—members of Shelby Energy Cooperative—must make two trips to the fair’s exhibition wings in their SUV loaded with contest entries of cakes, pies, honey cookery, and other delicacies.

Luckily they’ve never had an accident, but they did have to slam on the brakes suddenly one year, and Jeanne cringed when some of the cakes slid forward. No damage was done.

Then there was the year she forgot the delivery deadline for contest entries and wound up with 16 pies that were ineligible.

“We ate a lot of pie,” Leonard recalls.

Looking back, Jeanne is sure that her competitive spirit was inherited from her late father, W.T. White. But it was her mother Carroll’s willingness to let her experiment with cooking as a youngster that gave her confidence in the kitchen.

“No matter how bad I did, she always found something good to say about it,” Jeanne remembers.

When she was about 10 and in 4-H, Jeanne had won a blue ribbon for her biscuits at the Shelby County Fair, but for years, into her 30s, she showed three-gaited Saddlebred pleasure horses. Then, with two children and more work to do on the farm, she finally gave up riding and entered some of her cakes in the state fair in hopes of winning a sweepstakes.

with blue ribbons earning the most points. Winners of sweepstakes must wait four years to re-enter the same class in which they’ve won. Jeanne failed on her first attempt, but won the sweepstakes for her cakes in 1985.

Since then she has won 51 coveted sweepstakes rosettes, 16 since 2008. She has long since lost count of the total blue ribbons she has brought home, but they number close to 500.

“Jeanne is a really nice person, but when it comes to competition, she is a true competitor,” says Kentucky State Fair Culinary Department Superintendent Stephen Lee.

Jeanne admits that she is now aiming for 60 sweepstakes rosettes, but adds, “It’s not just about the ribbons for me. I have so many lasting friends that I never would have had without entering, and I’ve just learned so much from people. I’ve told some of them they’re better than winning a blue ribbon.”