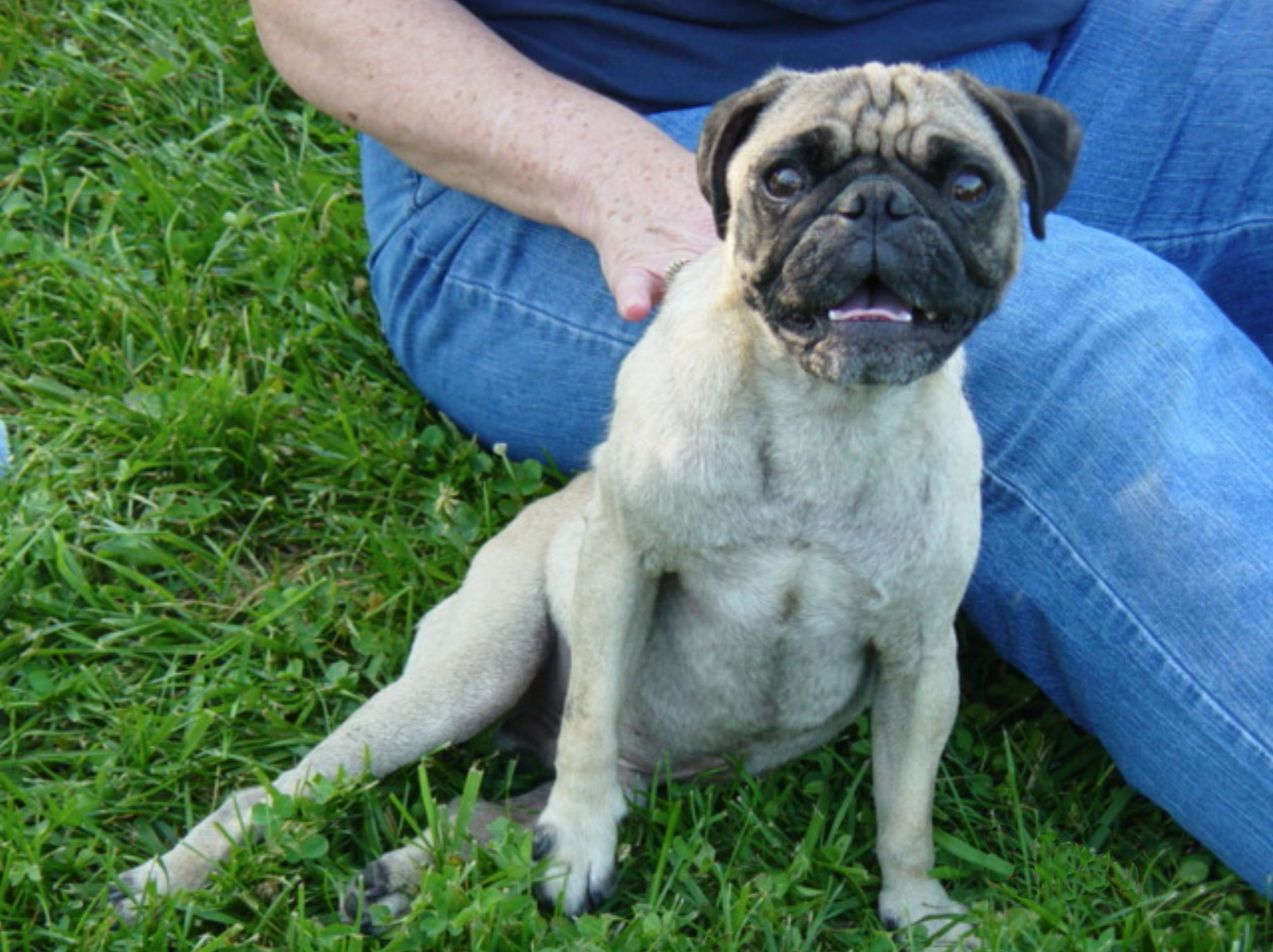 A small dog named Franklin has inspired people around the world with his medical miracle story. Photo: Karen Minton

The Dog Who Lived

Franklin, a 2-year-old pug, is playing on the kitchen floor with five other pugs. Right in the middle of the group, he’s pouncing, barking, grinning, and keeping up with the boisterous behavior of the breed that’s known for their big eyes and squat bodies.

It’s not until playtime is over and the dogs go their separate ways that you realize Franklin is different: his hind legs are paralyzed.

Franklin has been on an incredible journey involving a medical procedure using his own stem cells, an international show of support, and a fiercely dedicated owner who believed in him against all odds.

Franklin’s saga, along with his owner Karen Minton of Elizabethtown, began a little more than a year ago. He escaped from a yard, ran into the road, and was hit by not one, not two, but three cars. Amazingly, he was still alive, and a Good Samaritan, Linda Funk, took Franklin to the vet. When Franklin’s owner was told of the extent of Franklin’s injuries, he realized he could not care for Franklin physically or financially, and relinquished ownership of Franklin.

Linda told Karen about Franklin and, being a big fan of pugs, Karen went to visit him. Karen learned that Franklin’s spine was badly damaged, and the vet had little hope that the small dog would ever again have a good quality of life. But it took Karen only five minutes to make her decision.

“I couldn’t leave him there,” she says simply. And she took him home.

The vet strongly urged her not to do so. Franklin would never walk again, he said. He’d always have to wear diapers and a belly band, he’d need an expensive wheelchair; it was too much to put her through, and it would be best to put Franklin down.

But Karen would have none of it.

“I countered each and every one of the vet’s arguments,” she says. “At first it was a spur of the moment thought, that I’d just take Franklin home for some TLC, some decent food, and just see how he’d do.”

Karen started Franklin on long-term crate rest. When he was able, she took him to a holistic vet for basic treatment and deworming. She then took him to an animal chiropractor for acupuncture to stimulate his legs. The same week, she took Franklin to a neurologist in Louisville. After examining Franklin and taking X-rays, the vet gave her opinion: “Franklin will never walk again.”

But Karen refused to give up. She saw a spark in Franklin’s eyes that the vets apparently missed. Franklin wanted to live, and Karen firmly believes that Franklin spoke to her, saying, “Please help me.”

What gave Karen hope was that Franklin still had a small amount of sensation in his back and hind legs, though he could not yet feel deep pain. She also noticed that occasionally Franklin would lift his tail. That told her the spinal cord was not completely severed, that there was still a connection to his brain.

But caring for Franklin was an arduous ordeal. She looked for a daycare for special-needs dogs, which wasn’t available, but she did find an out-of-state facility that cared for dogs like Franklin. Hoping their specialized care would help Franklin improve, she had him transported to the clinic.

Her dreams were dashed when soon after that the facility came under fire for neglecting the dogs under their care. Karen learned that Franklin was not receiving his medications or given therapy; worried that the facility would be closed and the dogs confiscated by the legal system, Karen arranged for Franklin to be brought back to Kentucky.

“I thought I was doing the right thing for Franklin, but as things turned out, he was meant to be with me. All the dogs were glad to see him again, they seemed to say, ‘Oh, hey, where have you been?’ I had a ramp built onto the back porch, he was able to romp with the other dogs, and could get around in his wheelchair.”

Franklin and Karen settled into their routine: she got him a baby bed to sleep in to keep him safe; she learned how to express his bladder and stimulate his bowels; she faithfully gave him medicine he needed to stop him from chewing his feet, a common behavior in paralyzed dogs.

“At that point,” she says, “Franklin couldn’t hold his weight by any means, but I noticed when he was in his wheelchair, he could move his legs a little. That gave me hope. I started taking him to a friend’s pool, and he could kick his legs just a teeny little bit.”

Karen was convinced that with time and therapy, Franklin’s body would heal itself. But progress was extremely slow, so she started a Facebook page—Franklin the Pug—to talk with others in similar situations.

While Karen was making Facebook connections, she found an article about stem cell treatment for paralyzed dogs. To her surprise, the treatments were available from Dr. Cathy White at the Finchville Animal Hospital—who would have thought such an “exotic” veterinary treatment could be found in a small rural Kentucky town?

With fingers crossed, Karen took the dog named for Franklin Roosevelt—”another strong, inspirational man in a wheelchair”—for a consultation. The good news: Franklin was a potential candidate for stem cell treatment, but first needed to gain weight and add some muscle to his body. The bad news: the treatment would cost about 2 thousand dollars.

This is where most dog owners would have stopped, given up, and either put the dog down or learned to live with the dog’s condition. But Karen isn’t your typical dog owner, and she immediately started a fund-raising campaign. Along with yard sales, raffles, and silent auctions, she started a chip-in fund on his Facebook page. When a local newspaper story about Franklin went national, so did his Facebook page. Then it went international. Soon, Franklin had more than 1,300 Friends on Facebook cheering him on; donations came in from across the U.S., South America, Australia, France, Italy, England, and Germany.

Karen was overwhelmed at the response.

“Franklin is going to walk again. I believe in him. He’s got so much spirit about him, he’s touched so many people. How could I not help him?”

But it wasn’t enough. It would take the help of one more person.

Brenda Timperman, a distributor with Medi-Vet America, started following Franklin’s story. Medi-Vet specializes in stem cell treatment, and Brenda felt Franklin was a perfect candidate for a case study. Her offer to Karen: Medi-Vet would sponsor half of Franklin’s treatment expenses.

And if that wasn’t enough good news, Franklin had a final consultation with Dr. White, who said, “He’s ready. Let’s try this.”

Karen still tears up when she recalls that day.

“I just needed someone to believe in Franklin. He went from vets wanting to put him down, saying he’d never walk again, to finally someone willing to try.”

Dr. White explains why Franklin was a good candidate for stem cell treatment.

“This treatment is not a cure-all, you can’t rebuild a spinal cord—I was pessimistic at first. But the difference with Franklin was that he was starting to have a slight growth in his nerves. He started to feel deep pain, and that’s the first response to return in his type of injury. He tried to move his legs, so he wasn’t completely paralyzed—there was some neurological activity.”

Franklin received his first treatment last June. The procedure consisted of making an incision behind his elbow and harvesting about 30 grams of fat. The fat, or adipose, was then processed to extract his stem cells, which live near blood vessels. Stem cells are most viable in young patients, another factor in Franklin’s favor. Platelets were added to the stem cells to activate the cells, then placed under an LED light to grow them, or “wake them up” according to Dr. White. The cells were then injected into Franklin through an IV—the magic of stem cells is that they travel to the site of the trauma, in this case the spinal cord. The hope was that these stem cells would repair the damage to the spinal cord.

And then the waiting began. Stem cell treatment takes time, and meanwhile Karen was urging even more exercise on Franklin. He got his second treatment in September, and Dr. White recommended Karen take him out of his wheelchair and put him in a harness to encourage him to use his legs more.

“His hurdles will be that his brain,” Dr. White says, “has to be retrained to tell his legs what to do, when he needs it. His ligaments are atrophied from dragging himself along—now he needs to build his strength back. And it’ll take time for the stem cells to ‘turn on’ those areas that need to be regenerated.”

Franklin was something of a guinea pig, according to Brenda Timperman.

“We took Franklin on as a ‘compassionate case,’ not really knowing whether this would help. But we’re having more and more success with cases like this. And it’s an inspiring story: because of Franklin, two more dogs, both pugs, are now getting stem cell treatment.

“Stem cell is the modality of the future, it allows the body to heal itself. It’s so rewarding to see animals that are either cured or at least made better. With all that’s going on in the world, this gives us all a better outlook.”

After the second treatment, a bit of a miracle happened. Coming home one afternoon, Karen glanced in the window before coming in, and there was Franklin, standing beside the television.

“I just stood there, watching. Then I saw him take four steps. I couldn’t believe it.”

It was a start.

Karen has since noticed other signs of improvement: he now has more movement in his legs, she can feel his stomach muscles starting to tighten, and he’s regaining control of his bladder. No one knows yet if or when Franklin will walk again, but Karen is extremely pleased.

“If he has no more improvement than this, today, I’ll be satisfied. I am so happy with this improvement.”

While Karen credits science for helping Franklin, Dr. White thinks it was more than that.

“I’m very cautious about who I recommend this treatment to. But Karen was special—she was willing to take the time needed, that’s what made the difference.

“I’m very pleased with how he’s doing. I believe this dog will walk again.”

Karen and Franklin have become very much an inspiration to others. Because of their story, more people are trying the treatment for their own dogs, and it’s hoped it will one day be more available to people with trauma injuries. As for the Facebook sensation and medical miracle himself, Franklin’s not sure what all the fuss is about. He’s just happy people believed in him.