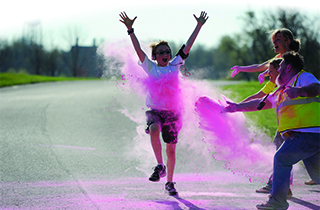 Though they were covered head to toe in rainbow-hued cornstarch, Heather Pennington’s 4-year-old twins, Abbie and Ellie, just kept coming back for more.

“They were all about the color. They absolutely adored it,” says Pennington, an attorney with the DelCotto Law Group in Danville, which also had several other staff members who participated. Pennington didn’t mind her girls getting especially dirty that day, since it was all in the name of fitness.

The site of the color shower was Danville’s first-ever Color Bash 5K last April—just part of a growing trend of “color run” races in the state, with an assortment of fun names like Color Me Rad, Color in Motion, and Crayon Mania, in which participants are doused with colored powder at several stations over the course of the run.

Pennington and her entire family participated in Danville’s Color Bash; her husband, Vince, 7-year-old son, Henry, and the twins did a 1-mile Fun Run, while Heather ran the full 5K.

“It was the first time our whole family has participated in any race,” Pennington says. “And it was fun to see how much the color stations really made the kids even more excited to get out and be active.”

Making fitness fun
Color runs are just one of an array of fun and extreme, obstacle-based runs taking hold across the state. From mud and zombies to foam, glow-stick lit darkness, and Army-style endurance obstacle courses, Kentuckians are finding there’s no shortage of challenges awaiting if they’re looking to ramp up the adrenaline level on their next—or first-ever—5K.

“So many people out there are looking for the adventure 5Ks. It’s not just about running anymore. It’s about what you can do to spice your 5K up,” says Josh Hendrickson, owner of 270 Crossfit in Benton, which last year sponsored the first-ever Mud Madness 5K event in Marshall County.

When Hendrickson began planning the event in early 2013 to raise money for an appreciation dinner for the county’s first responders, his goal was to attract 100 people to the inaugural run.

Even he was shocked at the level of interest the race garnered: more than 500 participants from across six states braved the first-ever Mud Madness course last August, dragging themselves through gooey mud pits, hurling down 200-foot water slides, and shimmying up and over Army-style rope and wood obstacles in Benton’s Mike Miller Park.

At press time, Hendrickson expected 700 participants to take part in the second annual Mud Madness, slated for May. With lots of mud and slides as well as several new obstacles like the Tire Torture Climb and The Rollers—a log-roll bridge across the lake—the event is designed to be challenging but still accessible.

“The majority of people who do this event are there just to have a good time,” Hendrickson says. “It isn’t about having to be in super-fit shape to come and run it. It’s just about getting a group of friends together and enjoying the day.”

Benton resident Diana Shadowen, a teacher and mom to two boys, had just started working out at Crossfit when some friends talked her into forming a team to tackle the 2013 Mud Madness 5K together. She found the team aspect of the event to be not only fun, but very motivating. “There was a lot of teamwork and cheering and encouraging of each other the whole day. I spent the entire day laughing, we were having so much fun,” Shadowen says. “That positive atmosphere really encourages you to push yourself (on the obstacles) to do things you normally wouldn’t do.”

London, Kentucky, resident Vanessa Lominac Sears says attending obstacle-based 5Ks across the state lets her tap into her adventurous side.

“My brother and I are both attorneys, and we enjoy doing these sorts of extreme runs together,” says Sears. “People always get a kick out of seeing us in photographs crawling through the mud, because we’ve both got these very professional day-to-day lives.”

Sears has competed in both the Warrior Dash, a traveling national event that was held last year in Versailles, and the Lion’s Chase, held annually in Corbin. Between the two events, Sears has slithered through mud under low-hanging barbed wire, braved steep water slides and climbing walls, and even jumped over fire.

“I enjoy these extreme runs much more than traditional running,” Sears, an avid runner, says. “For me, these obstacle 5Ks are enjoyable because they present a physical challenge, and they’re just a good time. People are out there competing as teams in costumes sometimes (Sears and her brother wore matching camo gear)—it’s just a great atmosphere.”

At Skeleton’s Lair Scream Park in Settle, Kentucky, near Bowling Green, co-owner Amy Burge has tapped into the demand for themed runs by offering two annual 5K events: the KY Foam Run in the spring and the KY Zombie Mud Run in the fall.

Participants in the foam run brave inflatable obstacles, mud, and blasts of bubbly foam from cannons, while zombie mud run participants attempt to make it through the end of the 5K obstacle course without having all three of their “flags” stolen by roaming volunteers dressed like zombies.

“What makes these events so popular is that they are not timed. They’re something that people can enjoy doing together with their family and friends,” Burge says. “It’s something that is health-minded, yet also really fun.”

Start small, build up
For folks who are just beginning an exercise routine, or for those simply looking for another fun way to get some exercise and test their mettle with friends, themed 5Ks are a great way to get outside and get moving.

Another bonus: many of these events double as charity fund-raisers, so participating is a win-win.

In Danville, for example, the Color Bash 5K was sponsored as a fund-raiser for Happy Feet Equals Learning Feet, a Kentucky-based charity currently in 15 counties that provides new shoes to disadvantaged children. Funds from the Danville run helped buy new shoes for students in Danville and Boyle County schools as well as the Kentucky School for the Deaf, says Lisa Burke, chair of the Boyle County Happy Feet program.

At Skeleton’s Lair, some proceeds from the foam and zombie mud runs are donated to support Relay For Life of Allen County, Burge says. And every year, communities across the state host 5K charity walks and runs to support cancer, MS, or Alzheimer’s research; autism awareness; local PTAs; and many other worthwhile causes.

“Whatever you can do to get people out there and running is a good thing,” says Brett Jewell, a buyer at John’s Run/Walk Shop in Lexington, whose Web site includes one of the most comprehensive lists available of upcoming race events across Kentucky and in surrounding states.

Jewell has seen a large rise recently in the amount of half-
marathons being held across the state. “Half-marathons are popular for people who might feel a full marathon is too much, but who have maybe done a few 5Ks and are ready to challenge themselves a little further,” he says.

And who knows where starting with a 5K and then working your fitness goals up from there just might lead?

Valerie Jones, a native of Elizabethtown who now lives in Cincinnati, recalls a time when she was intimidated at the thought of running a 7-mile leg as part of a four-person relay. Now, she is a three-time IRONMAN finisher, having completed the IRONMAN—a 140.6-mile triathlon that includes a 2.4-mile swim, a 112-mile bike ride, and 26.2-mile (marathon distance) run—in Couer D’Alene, Idaho, in 2011; Louisville in 2012; and Madison, Wisconsin, in 2013. She is considering competing in the Louisville IRONMAN again this year.

Jones says, “When people think about an IRONMAN distance as being so outrageously difficult for anyone to do, I always tell them, ‘I started off small.'” Jones ran several 5Ks and then, once she worked up to the 7-mile leg in the Cincinnati Flying Pig Marathon, she later set her sights on a half-marathon, then eventually a full marathon, then an IRONMAN. Now, Jones hopes one day to qualify for the IRONMAN World Championships held in Hawaii each year. To qualify, she’ll need to finish in the top one or two in her division (females 36-40) at one of IRONMAN’s annual events.

For Jones, constantly setting a new fitness goal—and then reaching it—is what keeps her motivated. “I’m always trying to do something that is a little longer distance or a little better time than the one before,” she says. “It’s amazing what you can accomplish with enough time, training, and dedication.”

Where to find an event
John’s Run/Walk Shop, Lexington, offers a comprehensive online calendar, with dates, locations, and links to register, to walks and runs across Kentucky. www.johnsrunwalkshop.com/race_calendar.html

Running in the USA’s Web site offers a comprehensive state-by-state listing of upcoming runs and walks. Go to www.runningintheusa.com, click on “Races,” then “Find a Race.”

Links to a few races and runs across Kentucky include:

All routes will begin at the northern-most point of Pine Mountain, in Elkhorn City, and will travel through Pike and Letcher counties along the Pine Mountain State Scenic Trail.
Runners in the 100-mile event will have 40 hours to complete the race, and the event has been chosen by USA Track & Field (USATF) to serve as the Mountain, Ultra Distance, and Trail (MUT) Championship event for USATF Kentucky, meaning high-performing participants can be eligible for selection on one of the world MUT teams, should they want to compete at that level.

“The USATF championship series designation means that the race will attract some of the most elite talent from across the United States,” Howell says.

Howell says she hopes the event will also help shine a spotlight on the amazing, unblemished natural beauty of Pine Mountain. Entertainment events planned for participants’ family and friends will showcase the region’s Appalachian heritage, music, and culture.

For more information, click www.cloudsplitter100.com or at Facebook.com: Cloudsplitter 100.

New to running or walking for fitness and not sure how to start? Not even sure how long a 5K is exactly? (It’s 3.1 miles.) Online training programs and smartphone apps that promise to take you from “Couch to 5K” may be just the thing to get you moving. For more information, click Couch to 5K.