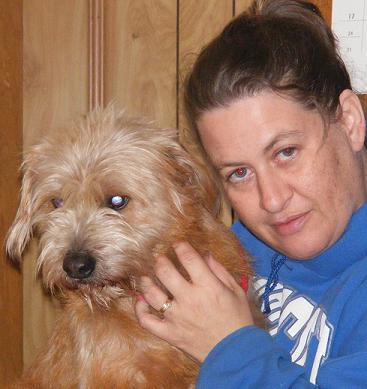 *Let the horses out of the barn, clean the stalls.

*Hose down the dog kennels.

*Coordinate a transport of dogs to their adoptive homes in another state.

*Send out a plea for help for a cat with feline leukemia.

*Check on the dog that’s due to give birth at any moment.

And do it all again tomorrow.

It’s an outwardly thankless job, but this is what animal rescuers do, day in and day out, whether they work at a shelter or operate an independent sanctuary. Most of the thanks come from the animals—that’s why rescuers do it. There’s little glory in this job, except for the gratitude of the animals.

But a group based in Louisville decided to change this. Pet Groups United is made up of animal rescue groups in the Louisville area and southern Indiana. Founded by Sherri Marcoski, the group’s president, in 2000, the group was formed to bring more publicity to each group, to work together to highlight animal advocacy.

“Because some of these rescue groups didn’t know one another,” Sherri says, “it was important for creating dialogue and understanding each group’s niche.”

It was decided from the beginning, Sherri says, “that everything we do will have the animals’ best interests as our priority.”

Part of that mission evolved into what’s called the Awards for Excellence. As part of an annual banquet known as the FurBall, awards are given to people who have gone above and beyond in animal rescue. As Sherri notes, “Many times, some incredible stories never make the news, so we ask the public to submit essays about these animals and people who have touched their lives.”

The awards run the gamut of animal rescue involvement, from shelter volunteers and animal control officers, to transport coordinators and media relations. And the animals certainly aren’t left out: an award is given every year for a hero animal and a service animal.

The judges for the 2010 Awards for Excellence had their work cut out for them: there were lots of nominations in each category, all of them deserving. Here are some of their stories:

Hero Animal Award
As a K-9 handler in Mayfield, Detective Shannon Keller expects his drug-sniffing dogs to be heroes. But to his surprise, it was the 4-pound family dog Milo, a Yorkshire terrier, who ended up the real hero. When the Kellers’ house caught fire one early morning, Milo woke the family up by barking continuously—until everyone got out safely.

Milo received the Hero Animal Award. As it says in his nominating essay, “The Keller family believes guardian angels do come in smaller packages.”

Milo even inspired the Keller family to continue the good work. When Milo won his award, the Kellers started volunteering at the local shelter as a family. And as Shannon notes, “The days we have spent at the shelter have been some of the most fun our family has together.”

Youth Service Award
You wouldn’t expect many 9-year-olds to be involved in animal rescue, but Brooks Korfhage of Louisville has already been at it for three years. That was when he rescued a lost lab, caring for him and contacting everyone in the neighborhood until the dog’s family was found. Since then, he has requested donations to animal shelters instead of gifts for his birthday, cared for an elderly dog until the dog passed away, and has become a vegetarian. For his efforts, Brooks was given this year’s Youth Service Award. Most likely it won’t be his last award.

Kelly has been a boon to the Shelby County Animal Shelter, where she founded the No Kill Mission. Thanks to her and the members of NKM, Shelby County is the first, and only, no-kill county in Kentucky. But she’s not stopping there—her dream is to make the entire state no-kill. And she just might do it.

“I firmly believe anything can be accomplished when you have a positive attitude and are willing to go the extra mile,” she says. “Believe in yourself and believe in success. The lives of innocent animals depend on us.”

Road Warrior Award
Delsie Williams of Bullitt County spends a lot of time in New Jersey and Chicago. She’s not on vacation or visiting family: Delsie regularly transports animals, dozens at a time, from various shelters to adoptive families of rescue organizations outside Kentucky. She was certainly deserving of the Road Warrior Award—she has rescued more than 1,000 animals. When she’s not on the road, she’s on the phone rescuing even more.

Perhaps her nomination essay said it best: “It takes determination and a strong heart to be Delsie Williams. We truly see the significance of all animal rescuers.”

Delsie was very proud to win her award. “So much of what we do as rescuers goes unnoticed. It feels good to be recognized by a group of your peers for all your hard work and time.”

Service Animal Award
Generally, when someone needs a service animal, he or she works with a trainer to choose the best-suited animal. That was not the case with Beau, this year’s Service Animal Award winner: he chose himself to be partnered with Jim Walser of Louisville. Jim is in a wheelchair, and for the past four years, Beau has constantly been at his side.

While Jim cannot sing enough praises about his service dog, Beau apparently still likes to make his own decisions. One of Beau’s jobs is to bring Jim’s clothes to him after a swim at the YMCA. Beau knows which locker is Jim’s, but sometimes, just for fun, he’ll bring someone else’s clothes to Jim. And every evening, Beau gets to choose what he and Jim will snack on.

The nomination essay for Beau says he “never leaves Jim’s side, regardless of how scared he is or how long Jim is down or incapacitated.” Beau is indeed an honorable dog.

Good Samaritan Award
The Good Samaritan Award was created this year to recognize some extraordinary special-needs students. Known as the Critter Club, these students at Kammerer Middle School in Louisville, supervised by teacher Krista Wheatley, have been volunteering for the Animal Care Society for nine years. They socialize, bathe, walk, and feed the animals. In addition, they raise funds to help animals with medical needs, collect food and supplies for rescue groups, and report suspected animal cruelty.

The group has been so successful that it is now open to all students at Kammerer Middle School, and there are now 50 Critter Crusaders.

Krista Wheatley says, “When I started the Critter Club, my main objective was to teach children to be kind and responsible with animals. The kids have been very enthusiastic and pro-active, and have set a wonderful example for all students at their middle school.”

Sherri Marcoski says she revels in the stories of amazing people and animals every year, stories that have made her laugh, cry, and gape in astonishment. She also says she’s glad she’s not a judge for the awards.

“The human-animal bond is an incredible phenomenon with surprises everywhere you look,” she says. “Heroes come in all species and sizes.”

Do you know a special person or animal in your community? Pet Groups United accepts nominations throughout the year at www.petgroupsunited.com. You can also join in the fun every year in February at the FurBall.