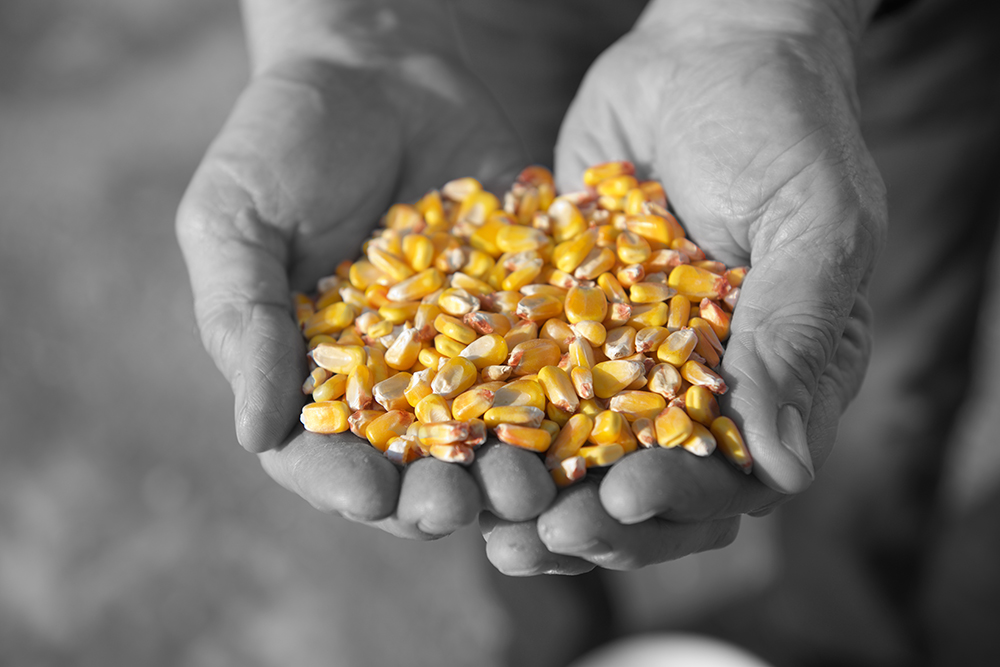 Corn has long been one of Kentucky’s most profitable crops, sold as feed for livestock, food for people and fuel for ethanol-powered vehicles. Increasingly, however, the state’s farmers are selling corn to quench a worldwide thirst for bourbon.

Bourbon, like all whiskeys, is distilled from a mash bill, or recipe, of fermented grains. But unlike all other whiskeys, bourbon must begin with a recipe that contains at least 51 percent corn.

Kentucky distilleries make 95 percent of the world’s supply of bourbon, and consumption has been growing at a dramatic rate. For five years straight, Kentucky distillers have filled more than 1 million barrels, and the current statewide inventory of 6.8 million is the highest since 1973. And behind every one of those barrels is around 16 bushels of corn.

As recently as 2014, Kentucky farmers grew only 40 percent of that corn, with much of the balance coming from Indiana. But in the past three years, the amount of Kentucky-sourced corn has increased by 65 percent, according to the Kentucky Distillers’ Association. That means Kentucky farmers are now growing two-thirds of the corn used to make Kentucky bourbon. They are also raising more wheat, which is used as a flavoring grain in some bourbon brands.

“I think people want to support their local farmers. It’s like farm to table. They want something grown in their area,” says Richard Strode, immediate past president and current board member of the Kentucky Corn Growers Association (KCGA) and a farmer in Daviess County. The KCGA works to find new and better markets for the more than 6,000 farmers it represents, partly through a small checkoff fee the farmers pay per bushel sold.

One of those markets is right in Strode’s neighborhood. The O.Z. Tyler Distillery in Owensboro underwent a renovation and expansion last fall after being purchased in 2014 by TerrePURE Kentucky Distillers Inc., a subsidiary of Terressentia Corporation. The project will triple its production, from about 18,000 barrels in 2017 to 70,000 in 2018. “That has dramatically upped our usage of corn,” says Master Distiller and Operations Manager Jacob Call. “This year we will use 650,000 bushels of Kentucky corn. Before the expansion, we were using only 166,000.”

Several local farms are supplying the grain, including Strode Farms, which is served by Kenergy Corp. Strode noted that this “new” market is actually a revived one. Owensboro was home to many distilleries before Prohibition; the building now housing O.Z. Tyler, for instance, has a distilling history dating to 1885. “I have an uncle that delivered corn to a distillery on the river at Stanley (Kentucky) 85 years ago,” he says. “He’s 96, so he would have been hauling corn when he was 10 or 12 … It’s come full circle.”

The KCGA also is providing a low-interest loan to O.Z. Tyler to build a grain bin for storage, which will enable the distillery to avoid a shutdown if weather or other conditions prevent farmers’ trucks from delivering, Strode says. “They want to put our name on the side of the bin so people know they are buying local corn.”

Even with the increased demand from bourbon makers, distilling currently represents only 7 to 10 percent of the overall market for Kentucky corn, Strode says. But “it does give us another place to go with our corn, and it helps the price,” he says, especially for central Kentucky farmers. Without distilling customers, those farmers would be hauling more of their corn to Owensboro or Louisville to be shipped downriver to places like New Orleans, he says. Ironically, it was that same trip—much longer in those days—taken by early barrels of Kentucky whiskey that gave bourbon its distinctive amber color and much of its flavor.

The folks at Caverndale Farms in Danville have to go only about 3 miles to deliver their corn to Wilderness Trail Distillery, one of the dozens of craft distilleries that have cropped up in Kentucky since 2009. Because of that, “we don’t keep a lot on hand,” says distiller Pat Heist. “We can get down to our last corn kernel, and they can show up with a shipment. So that’s good. A lot of their fields are on the way to my house. So, I’m on the way home and I’m like, ‘There’s the Class of 2018 out there growin’.”

Caverndale Farms has provided the corn and wheat for Wilderness Trail since Heist and Shane Baker started the distillery in 2014 as an outgrowth of Ferm Solutions, their fermentation consulting business, and recently started growing rye for them as well. Originally located in an unremarkable concrete-block building in downtown Danville, Wilderness Trail moved in 2016 to a 22-acre farm served, like Caverndale, by Inter-County Energy. In late 2017, Heist and Baker installed a 43-foot-tall, continuous column copper still and six new 20,000-gallon fermentation tanks. When that system became fully operational in March, the distillery’s output increased from 24 barrels per day to 150. Wilderness Trail will release its first bourbon, a four-year-old, 100 proof wheated bourbon, on April 28.

“When we started supplying them, they needed clean, shelled corn in 50-pound bags,” says Barry Welty of Caverndale Farms. “That grew from there to wanting it in bulk bags, anywhere from 2,000- to 2,500-pound bags. And then when they went to their new facility, we got into truckloads, 900 to 1,000 bushels.”

This year, “we may spend a day out there just trucking corn to them,” he says. “But we have the flexibility to do that, because we are so close, and they give me good notice. We want to meet their needs. We don’t want them to sit there and be out of corn or wheat or rye.”

Like O.Z. Tyler, Wilderness Trail provides its used mash, or stillage, to local cattle farmers. In a play on the angels’ share—the percentage of bourbon that evaporates during aging—Heist has dubbed this “the Angus’ share.”

“From farmers growing more grains, to more cattle farmers getting access to local feed options, from master loggers to the stave mills, there is more activity,” Baker says. “More jobs have been created here locally, more people have moved to our community to live and work here in Danville, more taxes are going to our schools and community, and there has been constant construction feeding local jobs and businesses.”

Farms that have long-standing relationships with large, established distilleries also have seen gains. Peterson Farms, based in Loretto, has been involved with its famous Loretto neighbor, Maker’s Mark, for going on 70 years, through four generations, says Bernard Peterson, who co-owns the operation with his brothers, Billy and David, and Billy’s son Albert.

“My grandfather started dealing with Mr. (Bill) Samuels in the 1950s when the distillery started back up, primarily removing the stillage and feeding livestock with it,” he says. “Our family has been involved with Maker’s Mark in some way or other ever since.”

Peterson Farms, which is served by Inter-County Energy and Salt River Electric, now manages more than 16,000 acres of corn, wheat and soybeans in seven central Kentucky counties. The Petersons sell almost all of their corn to distillers, with about a third of it going to Maker’s Mark.

Since the early 1990s, Peterson Farms has been the exclusive supplier of the soft red winter wheat that gives Maker’s Mark its distinctive taste profile. Bernard Peterson estimated that his wheat crops have increased eightfold since then.

“You definitely see the landscape changing” in central Kentucky, says Jason Nally, environmental champion for Maker’s Mark, who also grew up near the distillery. “What used to be fields used for hay or dairy cows, a lot more of those are transitioning into grain. I’ve definitely seen that here. You still have a few swine farms, a few dairy, but now that the tobacco base is gone … a lot of times, the tobacco was in your best soils. If you drive down the road where tobacco was, you’d better believe you see a mix of corn, wheat or soybeans.”

Maker’s Mark, the largest industrial member of Inter-County Energy, continues to expand. In 2015, the distillery added a third still that increased its production capacity by 50 percent, part of a $70 million investment by owner Beam Suntory.

The Petersons take personal pride in the worldwide success of the brand. Asked if he drinks Maker’s, Bernard Peterson smiles: “I may not be as committed as Bill Samuels Jr., but I’m close.”