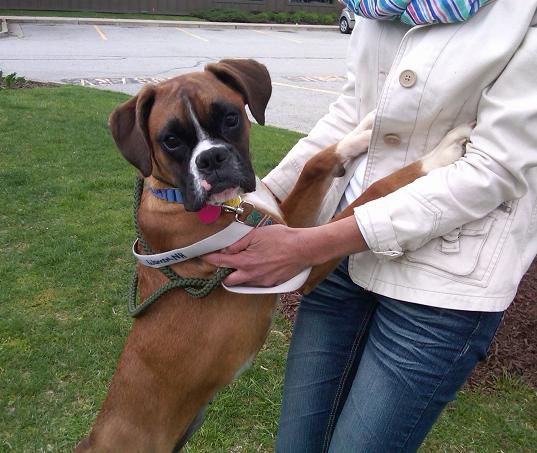 Annie is one of many dogs that Delsie has fostered and sent on transport to her adoptive home. CREDIT: DELSIE BRIGMON WILLIAMS

There is a serenity that surrounds Delsie Brigmon Williams that makes you think, “Yeah, it’s all going to be okay.” Her dogs certainly seem to sense it: you’d never know there are 20 dogs in her Mt. Washington home.

Founder of Hilltop Haven, a rescue and sanctuary for dogs, Delsie is well-known in the animal rescue community for her devotion and compassion. But rescue is not how she started.

Oddly enough, Delsie used to be a breeder—not a popular occupation among rescuers. She bred boxers until her daughter pointed out how many animals are homeless, in shelters, and are euthanized. Delsie promptly quit the breeding business, altered all her dogs, and began Hilltop Haven.

That was seven years ago, and she says her mission is to “take in the broken ones, the ones no one else wants.”

Delsie considers herself primarily a foster parent to the dogs she pulls from various shelters.

“But I have to be careful about which dogs I pull,” she says. “I look for dogs posted on the Internet that are people- and dog-friendly. I’ll take a scared dog, but not an aggressive one.”

Obviously she makes good choices: most of the dogs, fosters and seven personal dogs, are loose in the house, quietly playing, eating, or nosing her hand for a treat or a pat.

And she does indeed take the broken ones.

Mac is a large, beautiful French mastiff who has a condition known as megaesophagus. Rescued from a puppy mill in Illinois, feeding him is a challenge as he will vomit most of his food and water, and has to be monitored and fed from elevated bowls.

Schmeigal, named for a character from Lord of the Rings, was pulled from a shelter in Daviess County. At 15 years old, he was blind, had few teeth, and bald from an untreated flea allergy. He recently passed away, but thanks to Delsie, he died in a loving home instead of alone in a shelter.

Quasi is another senior dog she fosters that will probably not be adopted out or transported to another rescue.

“I have a soft spot for the seniors,” she says. “I keep them so they can die in a home.”

The other side of her rescue activity is transporting—and we’re not talking about a couple dogs going to the next county or state. Delsie coordinates a major transport twice a month that consists of 50-80 dogs. She works with Kim Morgan, of Jellystone Bark’s Rescue Rangers in Oswego, Illinois. The two of them meet there with a caravan of various foster parents and their dogs—”It’s quite a circus with so many people and dogs milling around!”—load the dogs, and transport them to shelters and rescues primarily in the Northeast, where, due to more progressive spay/neuter laws, there are more available homes.

“I have been working with Delsie for the past four years,” says Kim, “and I think we make an incredible team. We are both extremely passionate for our cause, and I cannot imagine what would have happened to all those wonderful animals if they had not been rescued.

“Once you spend the amount of time with Delsie that I have, you know there are truly angels put on this earth. She is proof of that.”

How many dogs has Delsie transported? She estimates an astounding 15,000 dogs, dogs that might otherwise have died homeless.

Even with all the dogs that have moved into and out of her life, there are many that particularly touched her heart, dogs she’ll never forget, such as River, a German shepherd.

“I rescued River from Bullitt County. He was broken, he was depressed, he had never been loved or shown affection. He would shy away if you tried to touch him. He stayed with me for nine months until he died peacefully of a tumor. He died a loved dog.”

“She broke my heart, seeing her curled up in the shelter. She should have weighed 60 pounds, but she was an emaciated 35, she looked the size of a Westie. She looked so sad.”

But under Delsie’s care, she gained the needed weight, and was later adopted.

Despite her many success stories, Delsie keeps a low profile. She shies from publicity, and some of her biggest accomplishments, such as a raid in Shepherdsville, never even make the news.

The raid she led was a hoarding case. An 80-year-old woman was keeping, and not properly caring for, 27 dogs. When she broke her hip, the EMS crew saw the condition of the dogs and called for help. Delsie quickly took charge. She brought crates and flea medication, loaded up the dogs, and took them to the Bullitt County shelter for bathing, grooming, and medical attention.

“None of these dogs had been altered, and most were pregnant,” she says. “One dog was already dead of heatstroke. And most were very unsocialized—all they’d ever known was this elderly lady.”

After all the dogs had been seen by a vet, she contacted Kim, who sent out a plea for help from rescue groups. Amazingly, all dogs were sent to rescue in one day. You can see a touching video of the rescue on YouTube: search for “27 Saved.”

While Delsie tries to pull dogs from as many shelters as she can, a lot of her rescues come from Bullitt County Animal Control, where she works closely with Tony Wilson, a shelter supervisor.

“Delsie has been a major part of helping the animals here in Bullitt County. She keeps 10-15 dogs a month from being euthanized here. She has been one of the best things to happen for this shelter and the animals.”

Despite a recent diagnosis of fibromyalgia, Delsie hasn’t slowed down much, and has no plans to stop: too many dogs are depending on her. And as her husband, Don, says, “I tell her all the time, don’t ever pass away, because I can’t do what she does. She’s amazing to me.”

You can contact Delsie at delsw7@aol.com or find her on Facebook.
Paula Sparrow from September 2012 Issue Photo by Delsie Brigmon Williams