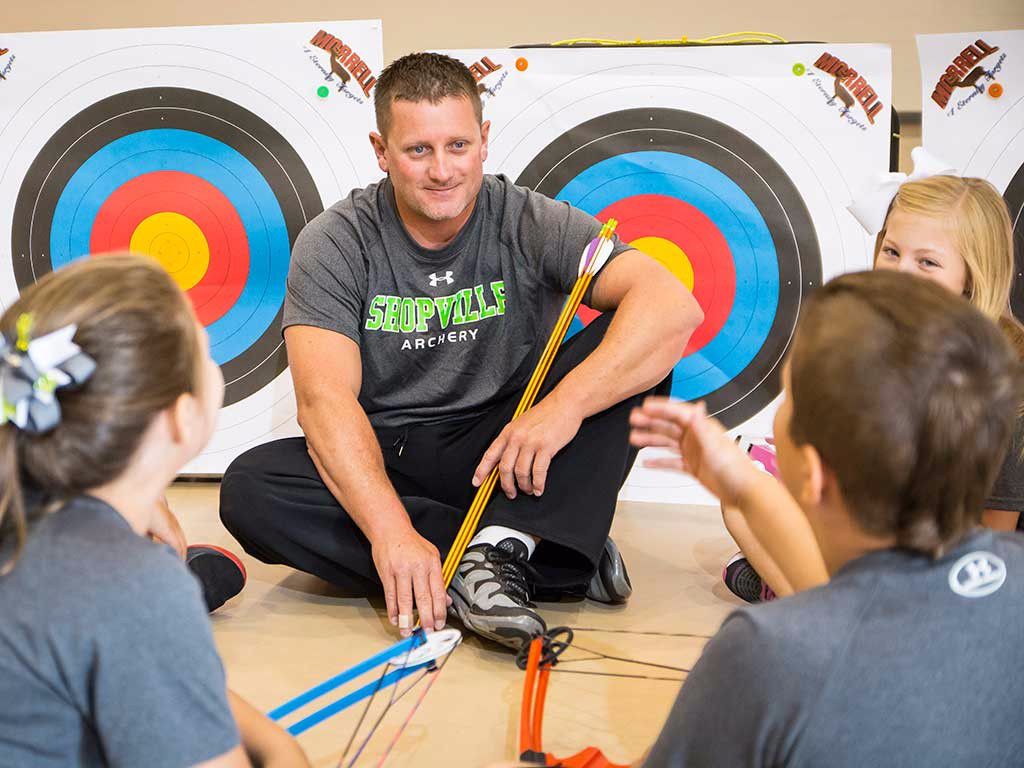 You don’t know their names. Their features are hidden by hard hats and uniforms as they perch on poles doing work that could take their lives if they are not skilled and observant.

Their jobs often don’t start at 8 a.m. or stop at 5 p.m., or even end after eight hours. In fact, some of their most important work is done in the dark of night or in turbulent weather when everyone else seeks shelter.

Even so, they often spend 40 years at a job they relish: lineman for Kentucky’s electric cooperatives. Linemen are the heart of every cooperative, the people who maintain the lines that bring all the comforts of electricity—light, heat, cooling, refrigeration, clean clothes, and so much more.

So, meet a few of the people who risk their lives to make yours better, and join us in saluting them and their fellow linemen.

“Journeyman lineman Dave Rasmussen is featured in the music video “You Know the Kind,” which is available for use by all Touchstone Energy co-ops. It spotlights the hard work and dedication of all linemen, and includes some from Pedernales Electric Cooperative in Johnson City, Texas.” Produced by Touchstone Energy Cooperatives

BIG SANDY RECC Johnny Red Harrison: Safety first, reliability always
John “Johnny Red” Harrison hasn’t taken a sick day in 34 years. He always arrives an hour before starting time and is one of the last to leave the office. Night or day, regardless of the weather, he is the first to respond to outage calls.

Since joining Big Sandy RECC, based in Paintsville, in 1979, Johnny Red has made a name for himself, as he advanced from apprentice lineman to journeyman lineman to serviceman. In 2013, he was presented with a Big Sandy RECC safety award for recognizing and correcting a potential danger in the field.

Although he knows the work can be dangerous, Johnny says he loves his job. “I like helping others wherever I can. I would do it even if they didn’t pay me,” he says.

GRAYSON RECC Richard Easton: Teaching the next generation of linemen
“I can teach somebody a trade that will make them a good living and something they can be proud of what they do,” says Richard Easton, explaining why he likes mentoring young linemen.

Richard’s latest endeavor—helping establish a new Lineman’s Training Program at the Rowan County campus of Maysville Community and Technical College in Morehead—might not have been possible had he not worked in every facet of construction and maintenance during 25 years at Grayson RECC. Recently, the Rowan County native became maintenance lineman for Rowan, part of southern Elliott County, and part of southeastern Carter County.

“We had some storms a while back, and I happened to be restoring power near the lineman school, so I called the teachers and told them if they wanted their students to see how we really work, to bring them out,” he says. “I think they learned a lot.”

At Grayson RECC, Richard has also been instrumental in mentoring young apprentices, teaching them to work safely and use approved construction practices. “Safety is first and pleasing the consumers, being obligated to them, is second,” he says.

Over the years, Jackson Energy linemen have assisted with repairs following hurricanes Hugo and Katrina, and numerous smaller storms in Southern states and throughout Kentucky.

“Our linemen are always willing to step up and help out other co-ops when they need to get the power back on after a major storm,” says Tim Wilson, McKee-based Jackson Energy superintendent of Operations. “We usually have so many volunteers that we wind up drawing names to determine who finally goes to help out.

“These guys leave their families behind and spend several days, or even weeks, rebuilding lines and making repairs because they know it could be us needing help the next time a storm moves through.”

MEADE COUNTY RECC Craig Williams: Doing the right thing
Craig Williams is a journeyman lineman and has been with Meade County RECC since 2008, starting out as an apprentice lineman. Craig works with two other linemen as Meade County RECC’s construction crew. They build, repair, and invent virtually everything needed on all of the cooperative’s properties.

That is not all Craig builds.

Away from work, Craig is helping to coordinate construction of a 40-by-80-foot addition to Raymond Baptist Church. A talented carpenter, Craig has taken on many of the tasks himself. He has also helped around Irvington and Brandenburg, repairing lights for the community ballpark.

“It’s the right thing,” Craig says of volunteering in the community. “If you have a talent, you need to use it. That’s the way I was raised and the way I like to live.”

NOLIN RECC Tommy Sullivan: “Lovin’ it all”
“I love my job,” says Tommy Sullivan, a lineman for Nolin RECC. “Never been a day I have ever regretted coming to work. After 28 years at Nolin, I still love the challenge of restoring power after a storm and building relationships with members who count on me every day. I love the challenge of always being ready when duty calls. Right now, I’m just lovin’ it all.”

Raised on a farm in southwestern Hardin County, Tommy says he grew up helping his neighbors and his community. He didn’t know any other way—“didn’t want to live any other way,” he says.

The neighbors he helped most recently live 1,500 miles away, in the small Haitian town of Côteaux. Helping these new friends gave him a chance to see the miracle of rural electrification firsthand as he helped bring electricity to the town.

“I am ready to go back to Haiti,” Tommy says, “and would love to be there this winter when the electricity is energized.”

SOUTH KENTUCKY RECC Chris Cain: Coaching young athletes
The Shopville Elementary School Archery Team went to the National Archery in the Schools Program (NASP) World Tournament in July and came back with a fourth-place finish. The team had already won the program’s Kentucky State Elementary Division championship in March for the second year in a row, and then won the NASP National Elementary Division in May by outshooting 147 other teams.

Their coach is someone the children look up to—both literally and figuratively. He is Chris Cain, a lineman for South Kentucky RECC since 2003, and he’s also featured on our cover this month.

On average, Chris spends six to 10 hours per week coaching the archery team. When a competition looms, those hours increase substantially.

Chris never questions that dedication, since that quality is also part of his daily work.

“Chris is the epitome of what it means to be a lineman,” says Joy Bullock, Communications coordinator for South Kentucky RECC in Somerset, “and it’s a job that he takes very seriously. He is also dedicated to the children of eastern Pulaski County. He is truly making a difference in these young lives.”

TAYLOR COUNTY RECC Mike Edwards: Linemen don’t complain
Tyler Edwards watched his dad, Mike, a serviceman for Taylor County RECC, head out into the ice storm of 2009 numerous times. Mike would come home, wet and freezing, change clothes, and go back out again. He went through so many pairs of gloves he finally ran out. Tyler offered his brand-new pair of hunting gloves; his dad brought them back, frozen, torn, and ruined. Even so, watching his father serve the community in such difficult conditions made Tyler proud.

“He is tough and has such knowledge,” Tyler, 20, says of his dad. “The way people look up to him and the way I look up to him made me want to follow in his footsteps.” Today, Tyler is also a lineman.

“A good lineman does his work, plus,” Mike believes. And it is not just doing the job, but the manner in which he does it.

“Whatever job Mike is told to do, he just goes and does it,” says Ann Beard, manager of Member Services. “He does it without grumbling or complaining that it doesn’t fit his job description. He has helped in many ways, expecting nothing in return. He does his ‘extra’ by being a good neighbor and friend.”

WARREN RECC Chris Burden: Getting much, giving much
“To those whom much is given, much is required.”

That is Chris Burden’s mantra for life. As a veteran lineman at Warren RECC’s Morgantown office, Chris says he has been blessed, so he looks for ways to give back. Accordingly, he has been part of hurricane restoration efforts in Mississippi and Louisiana. He worked the “storm of the century” in Georgia in 1993, took part in the restoration efforts during ice and snow storms that hit Somerset in 1996, south-central Kentucky in 2009, and South Carolina in 2014.

Sixteen-hour days are normal during storms. The linemen are working on an unfamiliar system, so the danger level is much higher. Everyone is exhausted, and the task is enormous. Working conditions are abominable.

“The very first thing is safety,” Chris says. “At home, you know where everything is, but not here. You make sure that everyone goes home. Then you evaluate the task at hand. You test to make sure the lines are un-energized. You put together a plan and always find a way to complete the task. There is always a way. And you have to look for the positive.

“It’s about serving people. When you get there, they have nothing. You see people in the worst situations of their life. For them to say thank you, that is really something.”