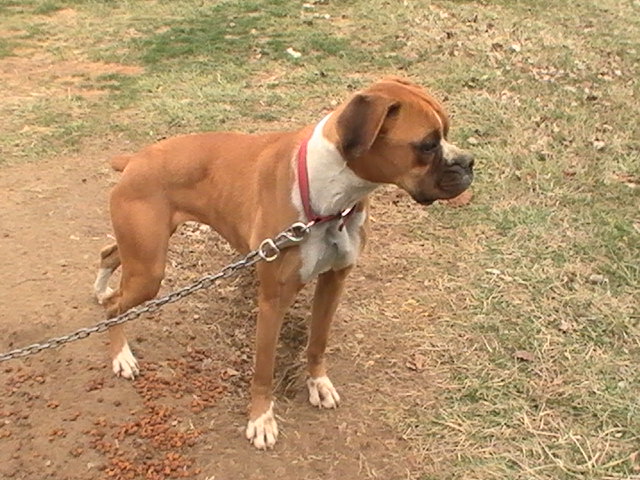 It all started with a dog named Sparky. A Lab mix, Sparky had lived his whole life on a chain. He was 15 years old.

“I passed by that dog every day. It broke my heart,” says Tracy Miller.

Determined to help Sparky, Tracy and her friends chained themselves to a doghouse in front of the owners’ home. They held their demonstration as a part of Chain Off, an event held nationally every year in July.

“We got great publicity,” Tracy says. “One old farmer drove up, yelled ‘Well, you all are just crazy,’ and drove off. But all the TV news stations came to cover the story. The owners were humiliated.”

As a result, Sparky was let off his chain and was free for six days. Then he was put back on his chain for two months, then disappeared. Tracy never saw him again.

That was when Tracy founded SOAR—Speak Out And Rescue—and became an advocate for dogs living abusive, neglected lives on a chain.

You may not have ever given it much thought: what’s so bad about chaining your own dog in your own back yard? Mary Ann Fugate, who helped found SOAR, explains.

“Chained dogs are three times more likely to bite, or become more aggressive, more territorial. They are unsocialized. Dogs are pack animals, and if they can’t be with a pack—be it other dogs or people—they become anxious and depressed.

“And it’s very dangerous to the dog—they become prey to other dogs and cannot run from an attack.”

Chaining, says Mary Ann, is often a symptom of an owner’s feelings about the dog: “These dogs are considered lawn ornaments or livestock, not sentient beings. They’re not valued, not given even the most basic of needs like food and water.”

Mary Ann had previously approached the Lexington Fayette Urban County Council about helping chained dogs, so when SOAR was formed, they decided to focus on the dogs of Lexington. The core group of volunteers was joined by Bobbie Hudnall and Stephanie Bramblet.

The group works like this: when they find a chained dog, or one has been reported to them, they visit the owners and ask if they can see the dog. The goal here is to educate the owners on the detrimental effects of chaining, which often surprise the owner.

“Our approach is very nonthreatening, nonjudgmental,” Mary Ann notes. “By being respectful, we can get people to tell us about the dog, and we can see what conditions the dog is living in.”

Stephanie adds, “Sometimes people are hostile, especially when they learn we will report them to Animal Control. But lots of owners are open to us, and some have even approached us first to get help for the dog.”

SOAR works with the owner to not only unchain a dog, but provide a better life altogether. They would like to see the dog moved into the house with the owner.

“We do not provide doghouses to those who don’t have one,” Tracy says firmly. “To do that, we’re just enabling them, giving them the okay to continue as they’ve been doing.”

But what SOAR will do is offer to put up a fence in the yard. SOAR volunteers will buy the fencing materials and put the fence up themselves. SOAR will also provide leashes, harnesses, dog treats, and straw as protection from mud and ice.

When Tracy and the other volunteers cannot convince owners to provide better treatment, they ask the owner to surrender the dog to SOAR, who then places the dog in a foster home and later adopts out—these are the dogs they consider their greatest success stories. Dora, their very first rescue, now lives the good life eating Wendy’s hamburgers; Rover was freed after living in a pen for 16 years; Lady, a boxer chained to a tree; and Sammy, who was attacked by a neighbor’s dog and couldn’t defend himself.

The biggest impediment to SOAR’s goals is the law regarding chaining in Lexington. SOAR has been an extremely vocal proponent of a no-chain law, getting the issue on meeting agendas of the Lexington Fayette Urban County Council. Was it asking too much for the Council to ban chaining altogether?

“Absolutely not,” Tracy asserts. “More than 100 cities in this country have banned chaining. Kentucky ranks number one in terms of animal abuse, the few laws we have are not enforced, and it’s time to change that.”

Her information comes from the Animal Legal Defense Fund, based in California. According to their surveys, Kentucky ranks as the number-one state in regard to animal abuse laws. Laws in this state are the weakest and most ineffective. Prosecution of offenders is low, with few retributions for those who abuse animals.

Some concessions were recently made by the Council: chained dogs must have on a humane collar, the chain must be at least 12 feet, shade must be provided, and there can be no mud. But the law is not well-known among the public, and Animal Control spends a lot of time visiting homes to make a report. In the meantime, nothing changes for the dog.

There is still no limit on the number of hours a dog can be chained. And the law is difficult to enforce: Animal Control can visit homes where poor conditions have been reported, and they have been known to visit certain homes repeatedly, but they have little authority to actually make changes to a dog’s life.

Mary Ann is quick to note there is a big difference between chaining and temporary tethering of a dog.

“We’re not objecting to the owner tethering a dog for a couple hours while you’re working in the garden. That’s fine for short periods of time, while the dog is being supervised. We’re trying to help the dogs who are on a chain—sometimes a heavy logging chain with a lock on it—24 hours a day, seven days a week.”

SOAR is revving up for the next step, looking for a Council member to sponsor a law limiting the number of chained hours. And they hope to make a violation of the law a civil penalty instead of a criminal one. That way, action against the offender can be made more quickly, invoking fines that could be designated to a fund for these animals.

None of this is easy work; it’s physically and mentally challenging. As Bobbie says, “People ask me, ‘How do you do this and not lose your mind?’ But we are determined to educate the public.”

While SOAR will take in surrendered dogs and report cases of abuse, the ideal situation is for the owner to keep the dog. SOAR can help with training the dog, and provide crates to housetrain. Sometimes it’s simply a matter of changing a person’s mindset: one little girl gave her dog little regard until Mary Ann started playing with the dog, pointing out all the fun aspects of living with a dog. The little girl began to look at her dog in a new light, and life suddenly got better for both of them.

There are more chained dogs in Lexington than anyone realized, and several of these dogs have been surrendered to SOAR. Foster homes are the most crucial need, places for the dogs to live until they are adopted. Sammy is an owner surrender who’s been in foster care for several months. He was chained for seven years, and was attacked by another dog. Despite all this, the Jack Russell/beagle mix is affectionate, eager to please, and gets along with other dogs, cats, and children.

Sugar is another foster dog looking for a new home. A beautiful hound mix, she was so full of worms that much of her hair fell out, and is growing back in a different color.

The dogs are safe, but need their own homes. They are examples of SOAR’s motto, “Saving lives, one chain at a time.”

While dogs are SOAR’s primary concern, their efforts are geared also toward the community, particularly complaints made about dogs that bark, or are reported for being abused.

“We realize not everyone is an animal lover,” Mary says, “but if dogs are unhappy, it makes for an unhappy community.

“When we help dogs, we help a family. And that helps make a community a better place to live.”