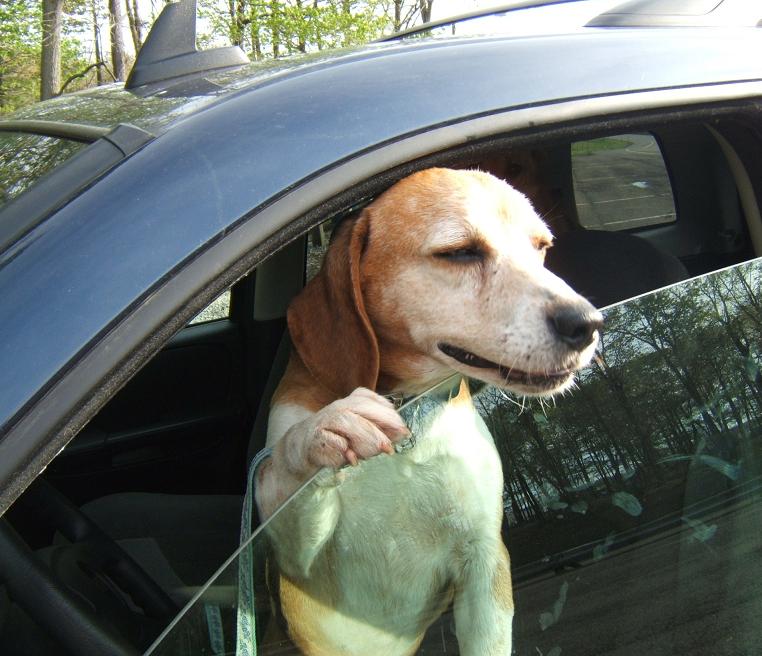 That car you just passed on the interstate could be part of a life-saving network of volunteer drivers transporting dogs and other animals to rescue.

I’ll always remember the first dog I transported. His name was Hershel, a huge coonhound-something that drooled a lot. He was pulled from a kill shelter to be taken in by an out-of-state rescue.

Hershel spent the night before the transport with me. Being new to transporting, I was really nervous about being responsible for this dog, and crept home, Hershel snoring in the back seat of my car, on a proverbial dark and stormy night.

He declined to go potty in the yard when we got home, so we went inside and I showed him his bed, food, and water. He sniffed around the house, hiked his leg against the living room wall, fell with a WHUMP into his bed, and snored his way through the night.

It was only after I delivered him to the driver of the next leg of his journey that I realized transporting was a great way to help animals.

If you’re not familiar with transports, it’s a bit like an underground railroad. Various rescues and shelters contact each other on available dogs, who’s got room to take in animals, and then coordinate volunteer drivers for the transport. A transport might be across the state or across the country. Coordinating these transports was cumbersome until e-mail came along—that’s when transporting became huge. With such easy communication, many shelters in Kentucky conduct transports every weekend.

Mary J. Daniels of Paintsville began transporting animals, primarily dogs, in the ’90s. Mary is the president and transport coordinator of T.R.A.I.N. (Transporting & Rescuing Animals In Need), and is among the most experienced transporters in Kentucky.

How do these transports get organized?

“It starts with a request from a shelter,” Mary says. A full shelter will send pleas out on the Internet, asking for help. A no-kill rescue, or even an adoptive family, will offer to take the dog—or dogs—on “legs” that are generally about 60 miles long. A transport may have only three legs, or 15 if the dog is going out of state—in that case, a coordinator also has to find a place for dogs to stay overnight.

Mary is accustomed to these longer transports.

“We try to help anybody who asks,” she says. “We pull dogs from a lot of ‘backwoods’ shelters who have fewer resources.”

Mary has gradually developed relationships with Kentucky shelters, volunteer drivers, and out-of-state rescues, and coordinates a transport about twice a month. Generally pulling from kill shelters in eastern Kentucky, the dogs go to homes or rescues in New York, Pennsylvania, and Maryland. Why those states?

“Those are places with mandatory spay/neuter laws, so there are fewer animals in the shelters,” Mary explains. “There is a big demand for puppies and young dogs—there’s actually a waiting list.”

Mary stays busy with transports—shelters are euthanizing more than usual, filling up with animals from people victimized by the economy. Transports, she says, are a great way for people to get involved in saving these animals.

“Transports save so many lives,” she says. “Just a couple hours and some gas—think how that benefits the animals. And you get to be involved in the happy endings and say, ‘I played a part in that.'”

Tandy Chenault of Finchville is a regular transporter for the Shelby County Animal Shelter. He has a cat and three adopted dogs, one of which was tossed out of a car passing by his house—not quite the type of transport the dog needed. Tandy wasn’t looking for another pet, but picked up a stray beagle, saying, “You’re not going to be coyote food today.”

Then a friend forwarded him an e-mail asking for volunteer drivers to take some dogs from Shelby County to an out-of-state rescue.

“And I thought to myself, ‘I ought to just do one,'” he says. Since then, he has volunteered every Saturday he’s available.

Transporting is definitely a feel-good venture, but it’s not without its mishaps.

“We had a whole caravan of drivers taking some dogs to a rescue—it was a large transport—when we got a call from a driver in the back saying she needed to pull off to the side of the road. One of her dogs was experiencing a, um, ‘potty accident,’ and needed to do some cleanup.”

Tandy laughs about some of his experiences—”I’ve had some backseat skirmishes I needed to break up”—and feels he gets more out of transporting than he gives.

A German shepherd named Heidi got Karen Hendren started in transport. Heidi was confiscated in an Adair County hoarding case, and temporarily held at the Green River Animal Shelter in Columbia. Heidi’s picture was posted on the Internet along with the many other confiscated dogs, and caught Karen’s attention.

“Her face just grabbed me,” Karen says. “She looked so terrified, so pitiful huddled in the back of her cage.”

A board member of the Lexington Humane Society, she had Heidi transferred to Lexington where the shelter worked on resocializing Heidi. She also worked on finding a rescue to take Heidi in, and found one in Wisconsin. Now, how to get Heidi there? That’s when Karen started learning how to coordinate a transport.

“I was intrigued by the process,” she says, “but didn’t necessarily plan to do it again. Heidi was just special to me. But then later I found a rescue in Chicago that could take one of our dogs, so I had to find a way to get her there.”

So what started as an isolated case has now become routine for Karen. Over the past year she has built up a detailed database of volunteer drivers, and cultivated relationships with rescues able to take her dogs in.

“It’s a great way to stick your toe in the water to see if you want to get more involved in animal rescue,” she says. “It doesn’t take much time, and you meet some great dogs and great people.”

More and more shelters across Kentucky are transporting animals to adoptive homes or rescues. Ask at the nearby shelters in your area and you’re bound to find someone who’d love to have you volunteer. Sure, it has its nuisances—one dog threw up in my purse, and another had a definite flatulence problem. But if you love animals, these are minor events that you’re probably used to anyway. You’ll find a feel-good story in every animal you transport, guaranteed. And as Karen notes, “Just think, you can be a part of their new start in life.”