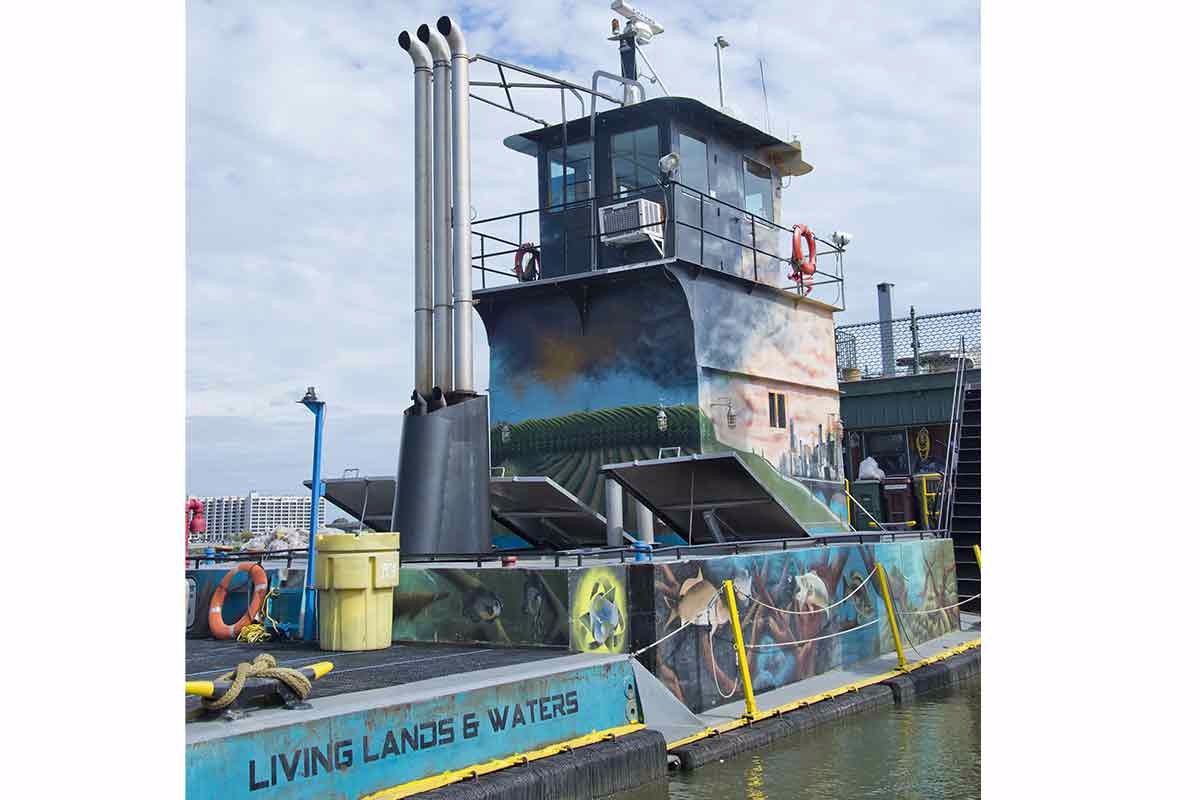 Despite how vital our natural waterways are to the environment and economy, there are precious few organizations dedicated solely to cleaning them up. And there is only one that operates out of a barge that carries more than 100,000 pounds of debris.

Living Lands & Waters is considered the only “industrial strength” river cleanup organization of its kind in the world. Though officially based out of Illinois, the environmental nonprofit’s 10-member barge crew spends up to nine months of the year floating down rivers, docking at different cities—among them Louisville, Cloverport, Paducah, and Owensboro in Kentucky—to host community cleanups and workshops, and inspiring the next generation of environmental advocates.

“For most people, trash along the river is out of sight, out of mind,” says Grace Waters, Living Lands & Waters’ development coordinator who writes grants for the organization while attending graduate school.

The barge forces people to confront the issue. It is a massive, mobile reminder of mankind’s impact on the Earth. In one corner: a mountain of tires. In another: a tangled mess of scrap metal and mariner’s rope. Nearby: a collection of steel drum containers, some of which once may have been filled with toxic chemicals. Then, there is the chain-link fence adorned with matted teddy bears, decapitated baby dolls, and other discarded toys. One part creepy, one part kitschy, finding items to affix to the fence is a point of pride for the crew.

Since it was founded in 1998, Living Lands & Waters has removed approximately 8.7 million pounds of debris from 23 waterways in 20 states. Crew members have taught countless educational workshops and gotten support from more than 95,000 volunteers. In Kentucky, the barge has traveled the Ohio River, the Tennessee River, and the small patch of the Mississippi that borders western Kentucky. (See their timeline at www.LivingLandsandWaters.org.)

The majority of what they recover gets recycled. The rest is disposed of properly.

That turned out to be a fairly typical haul. However, past cleanups have uncovered items too dangerous for Living Lands to handle—like meth labs, barrels filled with toxic chemicals, or illegal dump sites containing too much for even the barge to take on. In those cases, the group must call experts equipped to handle the unique circumstances.

Sometimes, people on other barges or boats will tip them off to a particular stretch of a river in desperate need of a cleanup. The sad reality, however, is that almost any stretch of any river is in need of cleanup.

A Floating lesson
Even without its cargo of found debris, the barge itself is a testament to sustainability. Around every turn it uses reclaimed materials. There’s siding from a shack in Fort Madison, Iowa, an awning made of license plates sent by social media followers, and portholes.

In addition to cozy living quarters for the crew, the barge contains a classroom where crew members host educational workshops for schoolchildren and community groups on the importance of healthy waterways. The in-person visuals of the barge reinforce the lessons of the workshops better than any pictures, videos, or statistics ever could.

Tammy Becker has been with Living Lands since 2002 and is married to its founder, Chad Pregracke. She says the most frequent reaction is shock when people see the barge before a community cleanup and then afterward.

“People are, like, all that came from right here? It’s eye-opening.”

The good news is that Pregracke and his crew believe conditions are getting better.

“Back in 2001 or 2002, people couldn’t understand why we were doing this work,” says Pregracke. “Now people are saying, ‘It’s about time!’ It’s taken years and years, but it’s a huge change. People have brought more attention to the issue. The mentality is changing.”

Development Coordinator Waters adds that the re-education process emphasizing not littering and not dumping into the watershed can be especially tough in rural communities where environmentalism and conservation are sometimes seen as superficial progressive causes.

“You just have to keep stating the facts,” she says.Like the fact that chemicals from just one cigarette butt can contaminate 2 gallons of water.“People just don’t know,” says Ashley Stover, a former crew member who spent five years on the barge. “There are people who don’t know they get their drinking water from the river. That’s why we do workshops and cleanups. To go, ‘This is why you don’t throw your stuff into the river.’”

She adds that each day on the river just increased her passion for environmental issues.
“It becomes a lifestyle,” says Stover. “Now I see any litter and I want to pick it up. It bothers me to see it. I know where it might end up. I know I’ve got to do something.”

Leaving the world a better place for future generations is the common thread among all of the people who rotate through the barge as crew members. It’s how they get through the tight quarters, long hours, and unpredictable demands of the job.

“Everyone here has the same goal,” says Waters. “It’s to make a difference in the world.”

Pregracke says one of the things he is proud of is that Living Lands has spawned local volunteer river cleanup groups after its visits. Each time the group revisits a city or town, it typically has more and more volunteers ready to put on a pair of gloves and comb the riverbank for anything unnatural.

About the founder
In the early 1990s, Chad Pregracke began calling government agencies about the unsightly and potentially toxic levels of trash he was seeing along the banks of the Illinois and Mississippi rivers where he worked as a commercial shell diver, fisherman, and barge hand. The nature lover naively thought somebody would take care of the problem once he brought it to their attention, but his words and messages seemed to fall on deaf ears.

Finally, in 1997, Pregracke decided he would just do it himself. Literally. As a one-man operation working off an $8,000 sponsorship he secured from the metal manufacturing company Alcoa, the then-23-year-old removed 45,000 pounds of refuse from the Quad Cities area on the Illinois-Iowa border.

The following year, he founded the nonprofit Living Lands & Waters.
Since then, the organization has grown and expanded beyond expectations. It has 13 full-time employees and is involved in more than half a dozen independent projects. They include invasive species removal, tree planting, and hosting an “alternative spring break” for college students.

For his efforts, Pregracke has won numerous awards and honors, including the Jefferson Award for Public Service, which he accepted in 2002 alongside fellow recipients Rudolph Giuliani and Bill and Melinda Gates. In 2013, CNN named him its Hero of the Year.

He sees the work of Living Lands & Waters as helping along a larger movement of environmental stewardship and responsibility, and, like a 6-mile-per-hour barge floating down the Ohio, the movement may be slow-moving, but it will demand your attention.

By April Corbin from June 2016 Issue