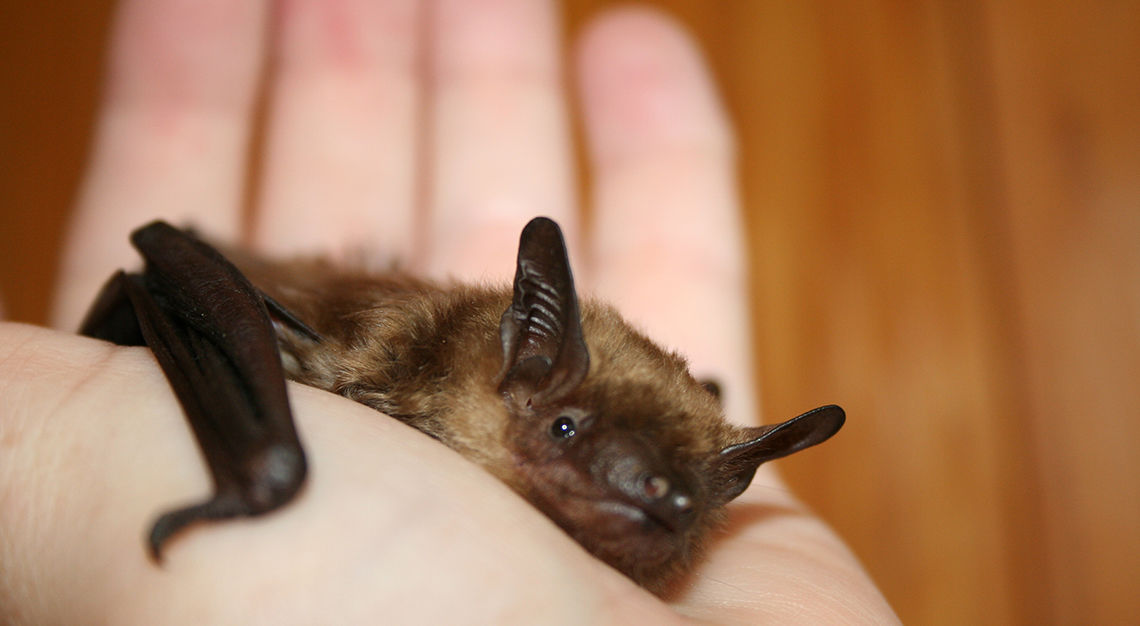 Cindy Lou is sniffing a visitor’s fingers. Blackjack is working his best moves to get some attention. And Cash is insisting he needs to be held one more time.

In other words, a typical day at Second Chances Wildlife Center for this opossum, raccoon, and skunk.

“I have to admit, I’m particularly fond of skunks,” says Brigette Williams as she gathers Cash into her arms again.

Located for now in scenic Oldham County, Brigette founded Second Chances about five years ago. It is a rehabilitation center for all native Kentucky wildlife, except deer. At any given time, it is home to opossums, raccoons, skunks, bats, squirrels, and mink, animals that been injured or orphaned.
[pullquote cite=”Brigette Williams” type=”left”]”Because I saw a void that needed filling. While there are lots of shelters in Kentucky, the wildlife has been overlooked. They need us too.”[/pullquote]

It’s a tremendously difficult job: why does Brigette do this?

Brigette started out as a volunteer at the Louisville Zoo—”where I got my feet wet in environmental education”—before opening Second Chances. She started with just opossums, but the rehab center has grown to include all wildlife and its own set of volunteers.

You’d never know the converted building was once a cattle barn. It’s more like a bed and breakfast for animals, with its spacious cages, enrichment toys, baby pools, hanging beds for the flying squirrels, and litter boxes. For added convenience, there are incubators and a fridge and stove.

The center is currently fairly quiet: the main residents now are the animals Brigette takes to her education programs. While Blackjack is trying to learn how to use crayons and Major the groundhog upends the box he’s trying to get into, Brigette explains that with an average yearly intake of 100 animals, most have been rehabbed and released back into the wild.

Of those 100 animals, she says most end up under Second Chances’ care because of human encroachment.

“Most animals come here,” Brigette says, “because their tree was cut down, or they were hit by a car. A lot of wildlife is attacked by roaming cats. Major’s home was bulldozed over.”

But the hardest cases, she says, are when people keep an injured animal, or one they mistakenly think has been abandoned by its mother, and try to nurse it back to health.

“People may mean well, but what happens is, by the time they bring the animal to me, they’ve done more harm than good. The animals have not been hydrated properly, or been fed the wrong food; often they come here emaciated from lack of proper nutrition. And so many times these babies were not abandoned by their mothers: it takes training to learn whether a baby has actually been abandoned or the mother is simply out feeding.

“Sometimes people keep a wild animal for a pet, because the kids want to keep it. Well, first of all, that’s illegal. In addition, the animals could pose a danger to humans by exposing them to parasites or disease.”

While rescue and rehab is the primary goal of Second Chances, education is a close second. For her programs, primarily held at schools, Brigette brings her “education animals” who were unable to be released: Cindy Lou was injured by a car and now leads the “Awesome Opossum” portion of the program; Blackjack has a metabolic bone disease and now represents the raccoons; Cash the skunk, with a chronic kidney disease, comes along to show just how adorable skunks are; and a bat named Gabriel, with an amputated wing, is one of the favorite members among the educational animals.

In fact, Brigette lights up when she talks about bats: dispelling misconceptions is a favorite penchant for her.

“What people don’t realize,” she says, “is that you’re more likely to contract rabies from a dog or a cat. Consider the numbers: only .5 percent of bats contract rabies, and they will die from it in 10 days. So what are the chances of getting bitten by that one bat while he’s infected? And bats are not carriers of rabies, that’s another big misconception: they get sick themselves and die.”

Brigette notes the damage to the ecosystem that would occur without bats: they keep the insect population under control, which is beneficial to small animals as well as people.

“Did you know,” she continues, “that bats save farmers nationwide billions of dollars in crop production. They set up bat boxes, providing a home for the bats that eat insects that would be detrimental to their crops. Thanks to the bats, farmers can grow food organically.”

With the need for wildlife rehabbing growing, particularly outdoor enclosures where animals begin “learning to be wild again” through limited handling, Brigette is currently looking for a place to expand.

It’s a lofty goal: a proper facility and land will cost around $400,000, but she’s determined to succeed.

Nicole Pollitt, a volunteer, agrees: “We’re wanting a public education center, with a two-way observation area for the public to watch the animals feeding and playing.”

An expanded facility would also offer a larger sterile medical area, a quiet area for the youngest animals (baby rabbits in particular tend to get stressed easily and can die), and the opportunity to reach more people with the education a new center would provide.

To learn more, go to www.secondchanceswildlife.org.

Brigette hopes that educating the public will bring more respect for the wildlife of Kentucky. Raising baby animals is a tedious job, requiring a medical intake and treatment, early nurturing until they begin their transition to the wild, and feeding babies every two hours. It can take months for an animal to be released, and it’s expensive: an average raccoon costs $350 from intake to release. A lot goes on here that the public is unaware of: mink need to be fed live mice to teach them to hunt; babies must be stimulated to evacuate their bowels and bladder. And perhaps most fun, baby raccoons need to be burped after feeding.

Brigette has big dreams for Second Chances, and her determination leaves little doubt that those dreams will come true.

“Rehabilitation is an important service that we provide to our community. I love offering it. Environmental education is something that every child needs. I love teaching it. I only hope that our community will help us obtain our much-needed public center so we can continue our mission.”