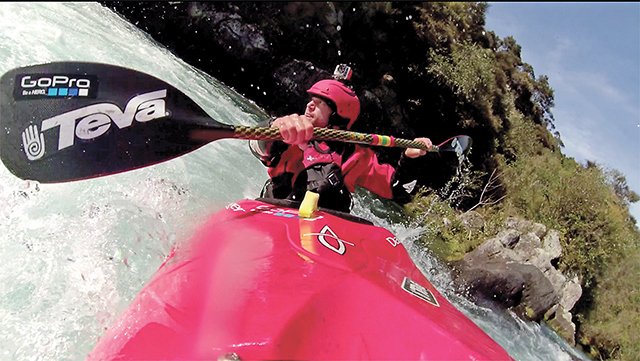 The most interesting consumer electronic devices used to be often relegated to the living room, on display for anyone who might be impressed by a big-screen TV or powerful sound system. But not these days.

Advances in fitness gadgetry, devices for the home, and products used while in the great outdoors have revolutionized our daily routines. Here are just some of the latest—and greatest—ways people are incorporating tech into their lives.

Gadgets for the body
Kentuckians have long relied on exercising and dieting to keep control of their weight. Yet more of them these days are also employing a little high-tech help—from wireless activity trackers that can slip into a pocket or clip onto, say, a belt or bra.

“Activity trackers improve a person’s ability to monitor their own performance, and you can definitely see the demand for them,” says Josh Flood, a senior analyst who covers technology at ABI Research, a market data firm.

All told, shoppers purchased more than 1.5 million wearable fitness devices in 2011, and that figure is projected to reach nearly 14 million by 2016, according to data from Parks Associates, a market research firm. The latest models are far more than just pedometers. The Fitbug Air, www.fitbug.com (from $29.99), for example, calculates steps taken and calories burned. The more expensive Fitbit One ($99.95) does this while also tracking the number of stairs climbed or monitoring sleep patterns at night. (Those restless hours appear on a graph once the Fitbit One is connected to a computer or smartphone.)

Other individuals who are seeking assistance with chronic health conditions that require active exercise have preferred digital armbands that keep technology more securely fastened to the body. Nike sells a version like this, for $149, called the Nike+ FuelBand, http://nikeplus.nike.com, while the Fitbit Flex runs $99.95. Yet with all these options, selecting a particular model can feel overwhelming.

That’s why analysts suggest considering a model that incorporates both fitness tracking features as well as the ability to plug in the kind of food that gets eaten. This will help tackle health from a more holistic perspective even when technology is involved. “It’s a natural fit for fitness devices, and health and diet information, to go together, and consumers can take advantage of that,” says Harry Wang, the director of Mobile and Health Research at Parks Associates. One option: Jawbone’s Up, www.jawbone.com/up, which wraps around the wrist and sells for $129.99.

Getting high-tech at home
Parents who love, as well as loathe, technology got into a heated debate after a certain online video went viral a couple of years ago. It featured a little 1-year-old girl struggling to interact with a magazine in the same way she engaged with an iPad. Should kids this young be allowed to use a tablet, some wondered? And, more importantly, is it safe for them and their older siblings to surf online?

There’s no denying that technology has changed the way tots and kids experience the world. About 29 percent of parents with a tablet share the device with their kid, a survey from Forrester Research has found. Yet technology experts say there are more ways for kids to use it safely today.

For example, certain tablets from LeapFrog Enterprises, as well as the $150 Tabeo from Toys R Us, come equipped with parental controls to ensure kids are safe while viewing content online. If your tablet doesn’t, consider free apps such as Mobicip Safe Browser with Parental Controls, www.mobicip.com, built by a team of parents, for certain Apple devices that filters out inappropriate content based on a child’s age from elementary through high school. Similar apps exist for other purposes, such as Net Nanny Social, www.netnanny.com, which for $19.99 per year lets parents monitor their child’s friends, pictures, and posts on Facebook, Twitter, Tumblr, Instagram, Pinterest, and Google+. This product is cloud-based and works for any device a child uses.

Parents should also keep an eye out for tablets linked to special app stores with kid-friendly programs that must be carefully reviewed. “Some are trying to introduce filtered Web content,” notes Matthew Hudak, an analyst with Euromonitor International, a market research firm. For tablets without these features, it may be worth steering kids to specific learning sites with safe content, such as National Geographic’s Little Kids section (www.kids.nationalgeographic.com, click on Little Kids) or Spatulatta (www.spatulatta.com), which teaches slightly older children to eat more healthfully and how to cook basic but creative dishes. NGA Kids from the National Gallery of Art (www.nga.gov/kids) features interactive discussions and educational games that help pre-teens develop analytical skills.

Programs to track or prevent too much data consumption on tablets or smartphones are also growing more prevalent. One possible solution: activating carrier tools for data monitoring. Both Verizon and AT&T, for instance, will send text messages to a mobile when, say, a parent’s teen gets close to their monthly limit on Internet use.

Fun, futuristic devices for the great outdoors
Back in the day, offering to share a home video used to elicit groans. Yet some newer digital camcorders from manufacturers such as GoPro, Sony, and Ion strap onto the body or mount onto a vehicle and offer home viewers the unique opportunity to experience action from a first-person perspective in either stills or video.

Social media sites like YouTube are full of footage from locals who are eager to share their adventures this way. One Kentuckian, for instance, recorded his view from up in the air as he flew a Cessna 172 plane over Ashland. Another secured the device to his helmet while shooting his fall from the heavens during a skydiving trip, while someone else stuck it to the front of his motorbike and recorded action-packed video as he raced against other riders.

While demand for these devices is growing, tech analysts say, are they worth paying another $200 to $440 on top of a smartphone or a digital camera that may already record video? That depends on whether you’re keen to take advantage of their greatest strength: it all comes down to being able to record adventurous experiences from the first-person, which people really haven’t been able to do before, says Chris Chute, an analyst who covers cameras and camcorders at IDC, a market research firm.

“A lot of people who aren’t sports enthusiasts will buy these as part of a family project or vacation, where you can shoot a first-person perspective of your kids or yourself,” he adds. “You can mount them to your back or chest, and it’s been a fun way to take video in a new direction.”

To be sure, this corner of the consumer electronics market is still quite small—only between 4 and 5 million units were sold last year, according to sales data from IDC. But manufacturers are rolling out more models that shoot in high definition and come equipped with better image stabilization and megapixel resolution than smartphones. Most also beat regular digital cameras because they come packaged with a rugged case that’s also waterproof, which makes it handy for use outdoors. Indeed, some Kentuckians have shared videos online of what they’ve seen while exploring trails through forests or caves.

A new breed of computers has emerged onto the tech scene and raised a few eyebrows in the process.

Sometimes they’re tablets that kids use for researching school assignments. Other times, they’re full-fledged laptops that Mom or Dad can use to pull up recipes in the kitchen. The common denominator: they’re hybrids, and you get to decide how they get used.

“I have an old-fashion notebook that weighs a lot, and it’s not comfortable to carry around,” he adds. “These convertibles give you an alternative to take what you need: use it as a tablet or a notebook.”

Microsoft’s Surface Pro, for example, is a hybrid that starts at $899. In tablet form, it works well as a touchscreen and includes a stylus that makes it easy to scribble down handwritten notes, which can later get converted to digital text. Tired of scrawling away? It includes a built-in kickstand that makes it easier to transform the gadget into a traditional laptop configuration. But to get to this point, you’ll need to pay for a keyboard accessory, which starts at $119.99.

Another entrant in this category: Lenovo’s IdeaPad Yoga 13, which boasts a screen that can flip a full 360 degrees into four different modes. In this case, the keyboard comes with the tablet but can’t be detached, so it adds a little weight to the $999 device.

Keep an eye on this emerging category if you’re keen to get a model but reluctant to shell out a premium price at this point. “The pricing is still a little high, because they’re new to the market,” says Stice. “The architecture is a little tricky, so the cost to build these systems are a little higher, but we’re starting to see pricing come down.”